Michael Delany-Korabelnikova’s unusual drinking spaces are revered around the world for their daring eccentricity and irony. We caught up with him to discuss his passion for design and the new venture that’s keeping him awake at night. 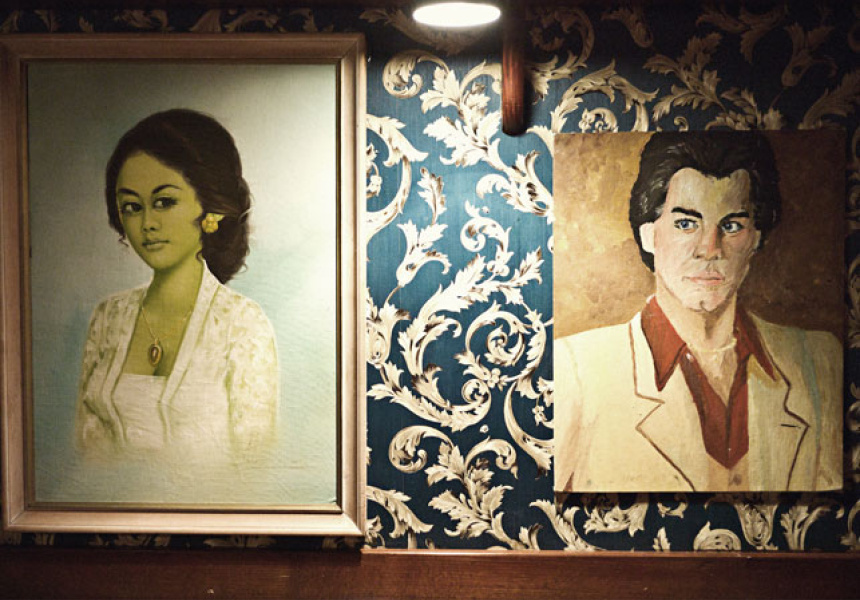 Michael Delany-Korabelnikova doesn’t really have a style, so much as an intimate relationship with space, not to mention a whimsical desire to create Australia’s most extraordinary (and odd) places to eat and drink. As owner of Honkytonks, Third Class, Sorry Grandma and The Bottom End in Melbourne, Bartender magazine voted the eccentric interior designer the fifth Most Influential Person in Australian Hospitality in 2011.

When he moved interstate later that year, he revitalised a host of languishing pubs across Sydney, including The Abercrombie, The Norfolk, The Carrington, The Forresters and Queenie’s with the help of his Drink & Dine Group, coupling his unconventional interior design with delicious, lightly themed menus and unpretentious cocktails.

Most recently, Delany and his Drink & Dine partners Jamie Doom (Bang Gang DJs) and James Miller (co-founder of Sumo Salad) have been preparing for the launch of Santa Barbara, another trademark reinvention, this time in the form of a major refurbishment for the old Piano Room in Kings Cross.

When we chat, Delany-Korabelnikova is in Melbourne, getting the latest on The Bottom End, his passion project on Little Collins Street. He’s hard to get a hold of – brilliant with ideas, but vague and hard to pin down. Tonight, we’ve arranged to meet above Mothers Milk in Windsor, where he’s going over promotional posters and discussing some new ideas with his partner from The Bottom End.

When I enter, he stands and greets me politely, excuses himself from the meeting and leads me out to a table on the back deck. He’s tall, with large framed glasses and a sprawling afro. Not unlike his kitsch interiors, Delaney’s dress sense is offbeat – peculiar even – but there’s warmth and intellect among the chaos.

“We’re under a bit of pressure to get Santa Barbara going,” he says of his latest Sydney venue, which is set to open next week on November 29. “We just got the plans finished yesterday, actually.” He’s in the throes of several large-scale projects, which keep him awake at night.

“At the moment I’ve got about three designs that I haven’t finished,” he launches off again. “I wake up in the night wondering when I’m going to get a call from people saying ‘You’re really holding us up now’. That being said, it’s way more enjoyable than doing some other stupid job and I really enjoy spending time and money on something and seeing the results,” he says.

Like all of his designs, Santa Barbara will be a vivid mix of strange furnishings and unlikely building materials, like kitsch fake bricks and dotted wallpaper. The menu, too, is unclear, “inspired by Korean-American barbecue-type things”, as Delany-Korabelnikova puts it.

Momentarily, his partner ducks around the corner with a poster and asks for approval. “Looks good,” he says, before asking where we were in the conversation. I quickly change the subject and ask about the beginning of his career in hospitality.

“I went to art school in Melbourne and then started doing shop fit-outs,” he explains. “I did a fit-out at Misty bar, which was just up from the Forum Theatre and they offered me a share.”

What’s most intriguing about Delany-Korabelnikova is his proclivity to land in idyllic situations, guided only by intuition and a happy-go-lucky attitude. It’s true that he never even planned on a career in hospitality – it just happened.

Delany-Korabelnikova admits that Honkytonks earned him the reputation he has today. At Honkytonks, he created Melbourne’s most iconic cocktail, Rave Juice, which gained cult status in the Melbourne nightclub scene. “It’s a drink in a bag with a glow stick in it,” he says with a grin. “It was one of those crazed inspirational ideas that seemed to work – it put my kids through college,” he laughs.

While at Honkytonks, Delany-Korabelnikova earned accolades all over the world for his design style. His highest praise came in 2006, when the bar was voted sixth in the Top 10 Clubs in the Universe, by V Magazine in New York.

After Honkytonks closed its doors in 2007, Delany-Korabelnikova set his sights on Sydney and his ethos has remained the same ever since. “I try and make places that are comfortable and enjoyable. But on top of that I try and create a story, or a feeling, or a nonsense that adds to the experience,” he says.

It’s this simple philosophy that has led to the regeneration of Sydney’s ailing pub culture – he fights to entertain in a traditional sense, without poker machines and onsite gambling.

Remaining true to form with his new venture, Delany-Korabelnikova says that it’s increasingly difficult to put a finger on the style. “I don’t know if you’ve ever been there,” he says of Piano Room (the bar that will reopen at Santa Barbara next week) as he plays with the ashtray that sits between us, “but it’s pretty foul. It’s like a gangster's fantasy. Its got weird sculptures of leopards and stuff like that. We’re going to change it completely.

“It’s got a 3am license so we’ll have DJs and a nice drinks menu and snack-sized food.”

But the bar’s going to have some unique – typically peculiar – features of its own. To illustrate the point, Delany-Korabelnikova tells of how he and partner Doom got carried away when visiting New York recently.

“Me and Jamie have been over to New York and gotten really into these fake surfaces, like fake timber panelling and fake bricks,” he urges excitedly. “In Queens, you see all these houses on the way from the airport that are obviously weatherboard, but they are covered with giant boulders and timber,” he laughs. “It makes them look like log cabins.”