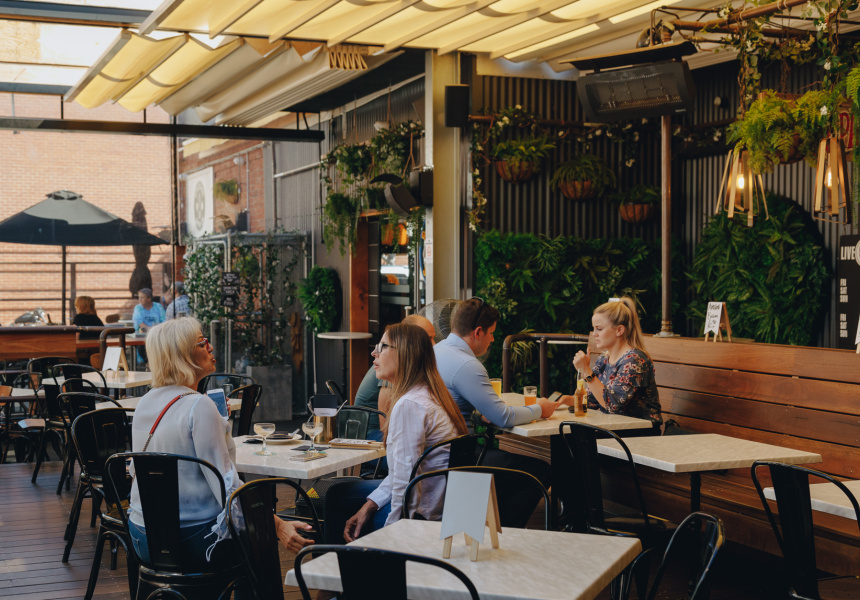 Penny Young started as a bottle shop, but scored a beer hall next door in 2018. The indoor-meets-outdoor space is all about natural light. Beneath a retractable roof, there’s stripped-back wood, exposed beams, copper fittings and a mural by Richmond tattoo artist Simple Sime.

A mixture of high-and-low wood tables and old beer barrels are dotted about. The bar top and other bits of furniture are made from wood that Penny Young owner Anthony Bongiovanni recovered from one of Melbourne’s oldest houses, Wentworth House, which he purchased a few years ago.

There’s 17 beers and one cider on tap. You’ll find a mixture of local craft from the likes of CoConspirators, La Sirene, and Fury and Sons. A few mainstream beers and internationals, such as Birra Moretti, round out the list. There also are a dozen or so wines by the glass – mostly local – and a few bottle options, and you can purchase any bottle over $25 from the expansive selection in the shop next door. Corkage is charged on top.

In the original bottle shop there are 350-plus beers, but the long, open-faced fridge turns a potentially tough series of decisions into an easy shopping experience. Cans and bottles from Australian brewers such as Colonial, Feral and La Sirène are all present. Limited release bottles such as Hargreaves Hill Phoenix Imperial Red Ale, or Moondog’s Jumping The Shark, will tempt many to up their shopping spend.

Bongiovanni is also passionate about wines that use rare or unusual grape varieties. Bottles such as Gapsted Wines’ saperavi (a Georgian varietal) and the 2011 Nero D’Avola from Chalmers are highlights. The latter, using an Italian grape variety, is from the first winery to locally grow and use the grape in 2009.