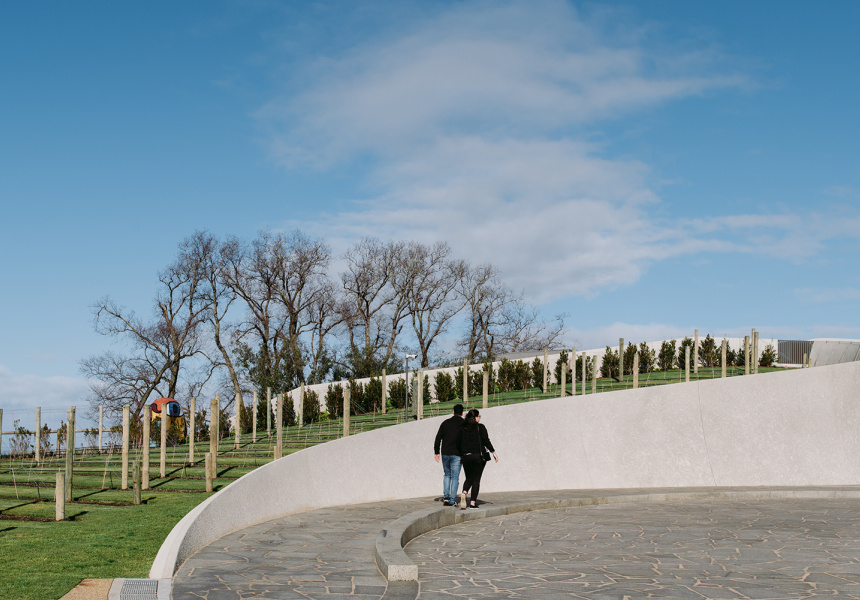 “Local” has been a culinary buzzword since Rene Redzepi introduced the world to New Nordic cuisine at Noma. But while every restaurant might tout local as one of its core values, it’s lived to varying degrees.

Laura – Point Leo Estate’s 40-seat, fine diner – is at the extreme end of the scale. Chef Josep Espuga and his team source just about everything from the Mornington Peninsula for the restaurant’s set menus. Each course is named after the region that contributed key ingredients.

From Tyabb, you might have a lion’s mane mushroom glazed like teriyaki chicken and paired with abalone. From Moorooduc, a liberal interpretation of a fish “pie” – an open-faced puck of pastry, duckfish, onion and zabaione (a simple Italian custard) spiked with almond. Dessert could be Berry Creek blue cheese cut with Point Leo’s own honey. In cases where these neat, artistic assemblages feature ingredients from further afield – prawns, for instance – it’s because the Peninsula doesn’t fish or farm them.

Between courses, take some time to admire Laura, the seven-metre-high sculpture that the restaurant is named after. The dark, vaguely Buddhist-looking head by Spanish artist Jaume Plensa sits right outside the window, along with 39 other works from renowned local and international artists. Beyond, the gentle curve of Western Port Bay furthers the room’s tranquil, subtly beach-y feel.

It goes without saying that a restaurant of this calibre – located within a winery, no less – will have something interesting to say about wine. But even knowing those two things, Laura’s list is an impressive document. Want to drink the kind of trendy, low-intervention wines so many inner-city bars are peddling? Go for it – there’s Mac Forbes, Jamsheed and Dormilona. Or maybe you’re someone with great respect for the old guard – Best’s, Mount Mary, Leeuwin Estate and so on. Drink up.