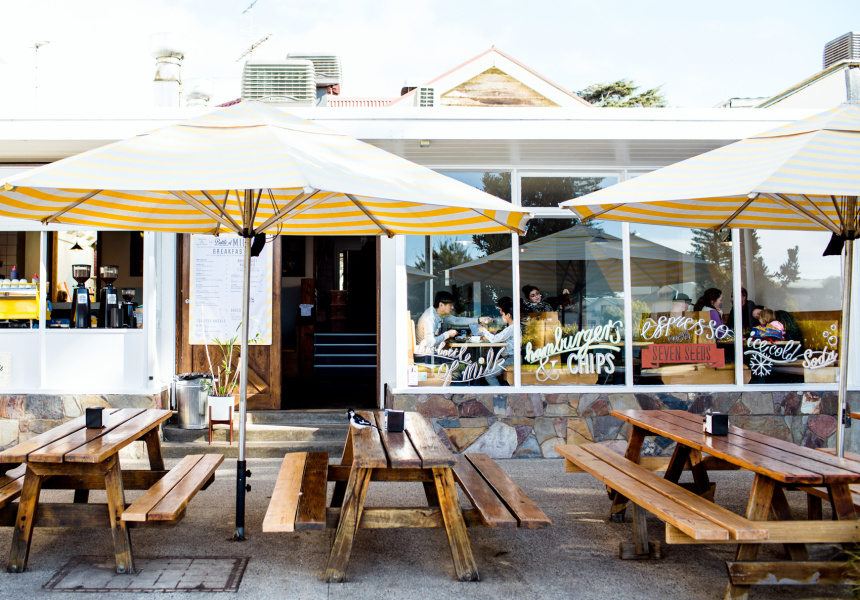 Lorne’s famous breakfast and burger joint, Bottle of Milk, is located directly opposite the beach. You can just about spot the bright yellow espresso machine pumping out Seven Seeds coffee from the shore.

Brett Graham (Rita’s Cafeteria, SMÄK Food House ) and Robert Lowther opened the spot in 2008, after the success of their gourmet take on fast-food, Pizza Pizza, just down the road. After Bottle of Milk became just as popular, the pair almost became local celebrities.

They’re good at specialising – apart from a couple of bagels at breakfast, burgers are the only thing on the Bottle of Milk menu. There are 13 beef varieties, four vegetarian, four chicken and four breakfast burgers. The meat is organic, sauces are made in-house, and vegetables are as local as they can get.

For drinks, grab an old-fashioned vanilla malt milkshake, a beer or cider, or some Innocent Bystander wine from the tap.

With its retro-style booths, outdoor courtyard and streetside tables shaded by bright yellow umbrellas, Bottle of Milk is peak retro beachside chic. Locals often come by for a coffee or a post-surf feed, but it attracts just as many tourists from Lorne’s central shopping strip. Torquay now has its own version, too.