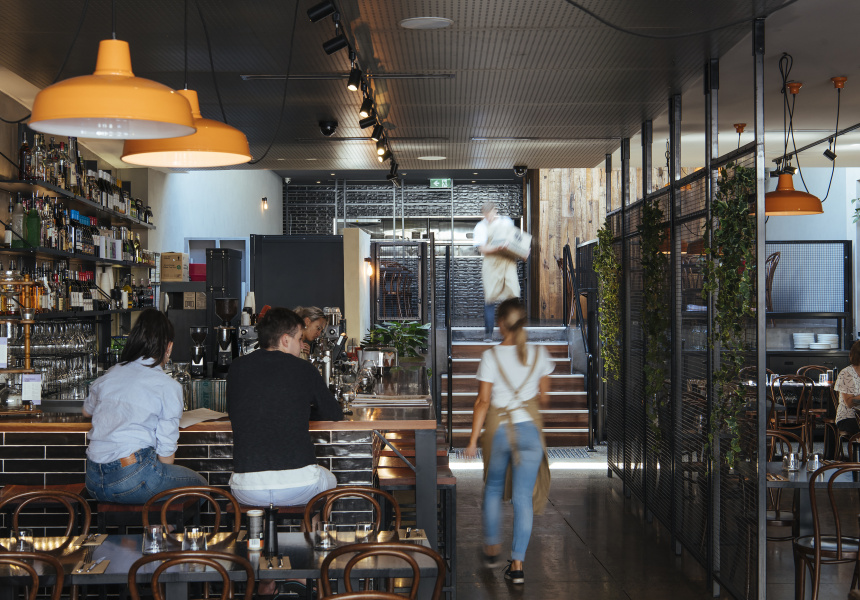 There's an old, faded sign affixed with defunct neon lettering, and an analogue clock mounted above this all-day eatery in Kew. Things change slowly on High Street: the sign has been there since the '50s.

For more than 60 years the site was Dawson's, a family-owned whitegoods store that traded until 2014. After that it became a pizza joint. And when Tony Harika, local resident and owner of QPO - a white-table-clothed Italian restaurant in Kew's 138-year-old post office building - saw that the space was empty, he grabbed it.

Coming up with a name was easy, it was already on the sign.

Dawson seats 150 in a slick but relaxed dining area with a long bar, a semi-open kitchen and high ceilings with light wells. Head chef Majid Jreige co-owns Dawson with Harika. The pair met at QPO, where Jreige worked as a chef for four years.

Breakfast starts with the familiar, such as smashed avo and folded eggs with chilli. Come lunchtime hotcakes are switched out for pizzas (making use of the former pizzeria's woodfired oven), paella, Asian-influenced salads and small plates to share.

Jreige's favourites are at the top end of the menu, such as grilled octopus with salsa verde and chorizo crumb, and Szechuan-pepper calamari. There's also sticky, crisp pork belly glazed with a master stock.

There are only three options for dessert, including a matcha panna cotta with raspberry parfait; tiny meringues; caramelised white chocolate; and fresh and freeze-dried berries.