Twenty years ago, if you’d asked Tony Carne where his life would lead, he probably wouldn’t have predicted owning a falafel shop in Kensington.

After stints in Australia and South America, he landed a job running tours out of Cairo, which is where he met his wife, Kaz. With plans to start a family, the couple moved to Melbourne, had a daughter and took up roles in corporate travel until late 2018, when Kaz was suddenly diagnosed with an inoperable brain tumour.

She sadly passed away a little over a year later. And shortly after, Tony left the travel industry behind to open Kazbah, an Egyptian-inspired vegetarian eatery – in Kaz’s honour.

Embracing a meatless menu wasn’t just a way to pay homage to Kaz, but also to limit his environmental impact.

At Kazbah, Tony and co-owner Delwyn Ogden specialise in Egyptian-style falafel made with vibrant green fava beans as opposed to chickpeas (using a recipe from an Egyptian friend’s mum). They’re served in pitas, bowls and even vegan snack packs, piled high with crinkle-cut chips, vegan gravy and nutty tahini. 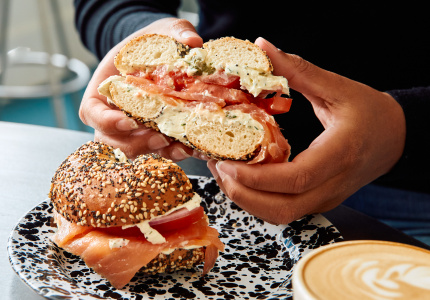