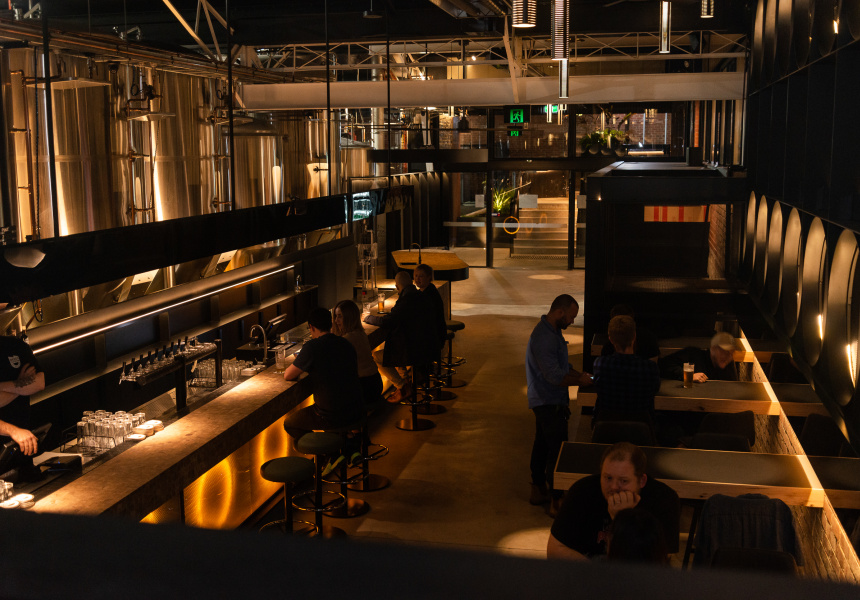 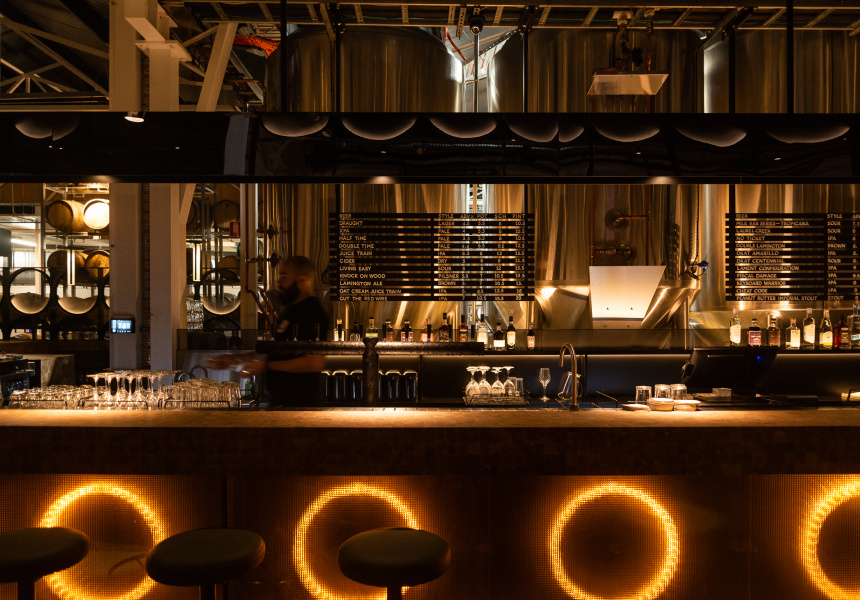 Deeds Taproom was the first business of its kind in the conservative Stonnington council area and took five years to come to fruition. Inside you’ll find 28 taps pouring 22 different beers. The brewery releases four new beers each month, meaning there’s always something new to try.

Co-founders Patrick Alé and Dave Milstein have been brewing together as Deeds since 2012, initially using the equipment at other breweries before moving into this site. They’re well known for their high-alcohol beers and hop-driven hazy IPAs, though they also brew the likes of a Lamington Brown Ale and Vanilla Porter.

The taproom is on a small industrial street next to Glen Iris train station, and you can see right into the brewhouse from Platform 1. The entrance is plain – a brick facade topped by a sawtooth roof. Head down the steps (there’s an accessibility lift too) and you’ll discover a dramatic fit-out designed by Splinter Society, the company behind venues such as Howler and Project 281. The carpeted second level might be the best spot for people-watching in any Melbourne venue. A long high bar offers a view of action below and is a coveted spot on busy nights.

The food borrows ingredients from the brewhouse. Expect malt butter and schmaltz (rendered chicken fat) to spread on your focaccia; hop-cured salmon; wagyu steak with a beer glaze that changes depending on what’s being brewed that day; and a malted cheesecake featuring caramelised puff pastry, hops and berries. Even the beer-battered fish (blue grenadier) is a step up, using a combination of Deeds Draught and distilled alcohol, dispensed through a soda gun to create a super light, crunchy batter.

If beer isn’t your thing, the wine list is exclusively Australian, except for one champagne available by the glass. Plus, there’s a gluten-free beer from Twøbays Brewing Co, and a cider, both on tap. The cocktail menu is short, but uses beer to set it apart: roast-malt syrup in the Espresso Martinis and hop bitters in the Dark and Stormys.

For those wanting to learn more about the brewing process there are brewery tours each Saturday. Plus takeaways, and even “Crowlers” (large cans filled and sealed while you wait) of anything on tap.