A Shady Lady on Johnston Street 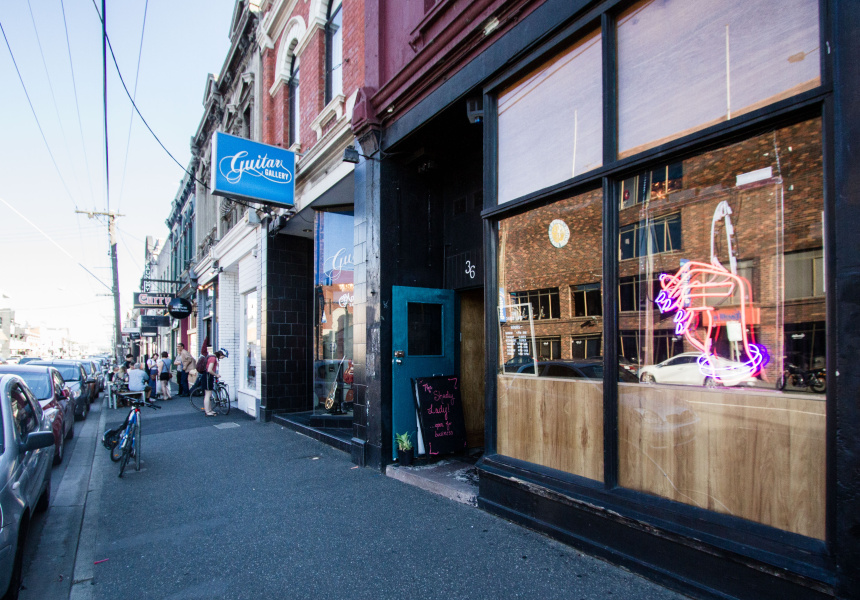 The inside of 36 Johnston Street is dimly lit with a worn concrete floor, a dark teal paint job and wood paneled walls. Tasseled lampshades glow over a long bar lined with stools. It’s a classic Fitzroy bar that feels familiar and lived in. The only reason you haven’t found yourself there on a Saturday night yet, is because it’s brand new.

The three owners of Shady Lady wanted the bar to feel welcoming, making a conscious decision to defy trends towards white tiles, Nordic design, and soft pastel colours, with something far from minimalist.

Reinier owns the bar with sisters Rosie and Georgina Maughan. A few of the knick knacks around the bar did in fact come from the Maughans’ grandma’s house, while their aunt drove down from the Queensland border to help with the leather-upholstered bar and drapery. If you look closely you’ll see the tasseled lampshades are wooden salad bowls with the tassels hot glue-gunned on

There’s shiny-gold vintage wallpaper in the toilets, and a mish-mash of furniture and plants in the astro-turfed beer garden out back. To say there is a ton of charm in this place would be a bit of an understatement and it’s a refreshing change from the precisely-planned big budget fit-outs that currently define Melbourne’s food and drink scene.

Even with so many fun touches though, Georgina Maughan says they want the main focus to be the bar itself.

“Mandy and I met in Brooklyn back in the day working in bars that were very similar to this one,” she says. “They have a long bar and people sidle up and get a seat, and you chat to the people around you, chat to the bartender, make friends and have adventures that you didn’t see coming.”

While the pair has spent time working in bars with much longer cocktail and beer lists (Maughan at Le Bon Ton, and Reinier at the Rochester Hotel), they wanted the drinks to be simple and approachable.

“We’re not sinking a lot of money into whiskeys or fancy stuff. We just want to be a fun dive.” Maughan says, adding, “Our cocktails are fun and frozen.”

That means icy mojitos, margaritas and daiquiris for summer. There are also tins of beer and cider from Port Melbourne’s Colonial Brewer, local brewers Bodriggy and Napoleone Cider are on tap.

There are outlets for charging your phone, and the bar is also dog friendly, so if you want to bring your pup, you’re more than welcome to. It’s the kind of bar the owners wanted to drink in but couldn’t find, “so we built it,” Maughan says.

For now there’s no food on offer, but there are plans to open a kitchen this year, with a focus on vegan options. Reinier is vegan and has found the limited late night options that cater to her are pretty much just “dry falafel”, and that’s something she and both Maughans plan on changing.