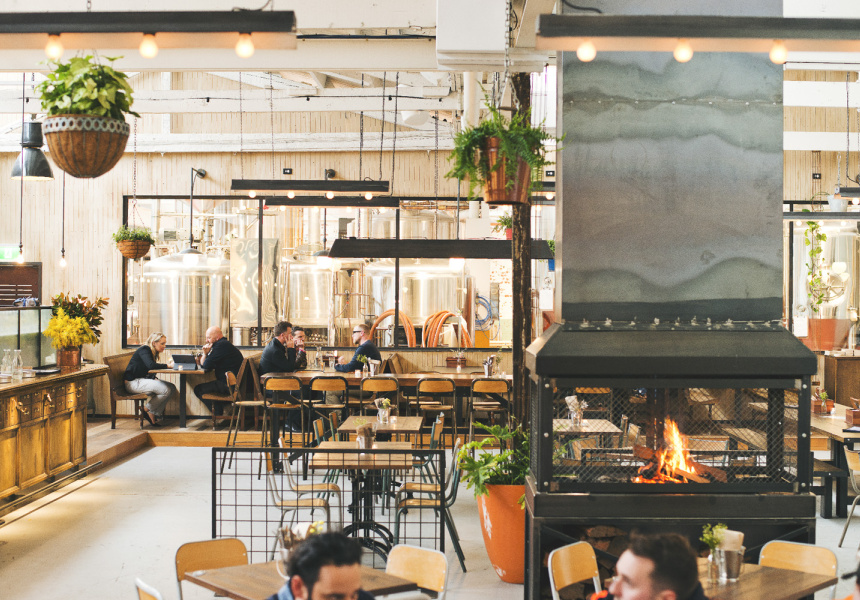 Steve Jeffares and Guy Greenstone think there’s a beer out there for everyone. They’ve been out to prove it for 10 years now, through their pub in St Kilda, The Local Taphouse and their annual beer festival, the Great Australian Beer SpecTAPular.

It’s the same story at Stomping Ground. The duo has spent the past six months converting the vast Collingwood warehouse into a brewery and bar with long-time Taphouse manager Justin Joiner.

“We want to take people from wherever they happen to be on their beer journey to wherever they want to go,” Greenstone says. “That means not only having things that are really ‘craft’, but really well-made but accessible beers, too.”

Brewer Ashur Hall has unveiled nine beers so far. One of the biggest sellers has been the Bearbrass milk stout – a dark, coffee-ish ale that uses lactose for a softer mouth feel (there’s no milk in a milk stout). Surprisingly, it’s listed on the menu under “Easier Drinking”, along with a German-style lager and two different pale ales.

The “Moderately Challenging” and “More Challenging” headings offer a funky, yeast-driven grapefruit saison; a bitter, hop-heavy IPA and a beastly 11.4 per cent barley wine that tastes like liquid toffee.

There are also three wines on tap and two ye-olde handpumps for serving English-style beers. Two separate cool rooms make sure every tap is pouring at the appropriate temperature.

Despite all this beer and the gleaming fermentation tanks looming next door, Stomping Ground doesn’t really feel like a typical brewery. Or a pub. It’s something else entirely.

Maybe that’s down to the two big braziers that warm the site. Or the retractable roof that covers a quarter of it. Or the kids cubbyhouse in the corner, behind a child-proof gate. Or the potted trees, climbing vines and other greenery that have barely made their mark yet. There’s really nothing like it in Melbourne.

Likewise for the vintage-industrial finishes by Munch Valentic Architecture and interior designers StudioY. Brass, timber and black iron give the 250-patron site the look of a Victorian-era factory or train station.

There’s also an open kitchen run by American Paul Karsten, a veteran of cooking for and with beer. His menu includes stout-braised shortrib; charred baby cos with miso; mussels steamed with saison; and a beef-cheek burger served on Jewish challah bread.

For dessert there’s a not-at-all-gross beer ice-cream and beer sorbet by Billy Van Creamy. If these aren’t for you, then maybe there’s not a beer out there for everyone?