The pastries that captured the attention of The New York Times. In an article published in early 2016 in The New York Times’s T Magazine section, writer Oliver Strand froths over Lune's “ethereal, exceptionally flaky pastries”. He writes glowingly of their “holy balance of buttery heft and feathery flake" and states that they "may be the finest you will find anywhere in the world, and alone worth the trip across the dateline”.

It's a huge endorsement for the Melbourne croissanterie and one that makes The Broadsheet Cookbook's inclusion of a Lune recipe that little bit more special.

To celebrate the accolade, we're sharing (one of) the secrets. Enjoy.

Followers of Lune's cult-status croissants, listen up: owner Katie Reid is hiding her pastries from you.

"It's true", she says, laughing. "Traditionally, in France, leftover croissants are sold the following day filled with an almond frangipane and baked a second time. But at Lune, because we never have any leftover croissants, we have to bake pastries especially and allocate them for the almond croissants."

After graduating with an Aeronautical Engineering degree and working with Formula One developing cars, Reid realised she wasn't where she wanted to be. She tossed aside that career and studied the art of pastry in Paris.

By 2012 she was supplying her flaky, buttery goods to some of Melbourne's best cafes. A year later, she and her brother, Cameron, opened to hoards of people lining up outside their miniscule bakery door in Elwood, some from 4am.

They began putting aside 75 croissants each day to ensure the demand was met for these almond pastries, implemented a six-pastry quota to even the stakes for customers and – less than a couple of years later – upgraded to a 400-square-metre warehouse space in Fitzroy.

We suggest purchasing as many plain croissants as the quota will allow and trying out this recipe the next day.

To make the frangipane, beat the butter and sugar on low speed with an electric mixer until light and fluffy, about 2–3 minutes (use a K beater if using a stand mixer).

Add the eggs one at a time, waiting until each one is incorporated fully before adding the next. Mix in the almond meal until incorporated and transfer to a piping bag.

To make the sugar syrup, add 250ml of water and the sugar to a small saucepan and stir over medium heat until the sugar has dissolved. Bring the syrup to the boil and take off the heat.

Top the croissant with a piped seam of frangipane and finish with flaked almonds.

Place the croissants on the prepared baking tray and bake for 18–20 minutes until the frangipane is set.

Once cooled, dust the almonds croissants with the icing sugar. 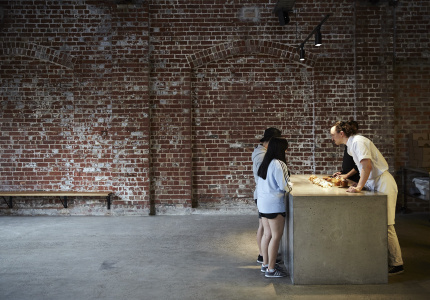