Over two months, four guest chefs will take over the Lee Ho Fook kitchen for cultural-mash-up meals with a Chinese slant. Earlier this year, when the World’s 50 Best Restaurants awards came to town, Chinese diner Lee Ho Fook hosted chefs from Momofuku’s Sydney and New York restaurants for a special one-off dinner. The excitement around – and success of – the evening inspired Friends of Lee Ho Fook, a new dinner series for which chef-owner Victor Liong has invited other cooks to take over his restaurant for the evening.

“I thought, ‘How can I bring an experience into the restaurant that people can’t find anywhere else?'” says Liong.

The series will start on the first Monday of September and run every two weeks into October. A different chef (or two) will take over Lee Ho Fook’s CBD kitchen for the night, combining their culinary expertise with a Chinese bent. The special menus will showcase a blend of the chefs’ signature dishes and unique plates made especially for the occasion.

“I like this idea of freestyle Chinese, which loosens up the parameters for all sorts of multicultural influences, together with what’s available in the way of fresh local produce. It’s original, it’s modern and it’s exciting,” he says.

He’s selected his favourite chefs that Melbourne diners don’t get to sample food by very often, if at all.

The series kicks off with Jemma Whiteman and Mike Eggert, formerly of now-closed Woollahra restaurant Pinbone (and currently a Chinese pop-up), who are arguably one of Sydney’s most talked about brunch duos.

“Their inventive approach to Chinese cuisine is just awesome and I missed the chance to visit and try their food while Pinbone was open,” says Liong. “So I’m bringing them to me instead.”

Two weeks later Alex Munoz, who will soon open a Chilean restaurant in Sydney called Labart, will be on the pans. His menu will be a preview of what to expect at his new place.

“I’m interested to see how he blends Chinese, Cuban, Chilean and Peruvian cuisine, and am hoping this’ll give me the green light to finally make tacos in my kitchen,” Liong says.

Provenance’s Michael Ryan will be in town for the third guest dinner, saving customers a four-hour car ride to his Beechworth restaurant to try the signature roasted duck lap cheong dish.

To close out the series Liong has enlisted Pasi Petanen, the former Marque head chef and Cafe Paci founder, who was in Melbourne earlier this year with his acclaimed Finnish-Italian wine-bar pop-up, That’s Amore.

“Pasi is one of those underground-legend-type chefs who’s so good at everything he applies himself to,” says Liong. “He’s never done Chinese cuisine before, so this is a challenge I’ve put him up to and I honestly cannot wait to see how he fairs.”

The guest chefs will have full creative control over the music, the drinks list and how their dishes are served.

“I can imagine Pinbone wanting to serve natural wines only, while Michael Ryan will lean more towards serving Japanese sake,” says Liong. “And Pasi? Well he’ll be unpredictable and creative – cocktails maybe?

“These nights won’t be polished and fancy, but rather a bit loose, relaxing and fun.” 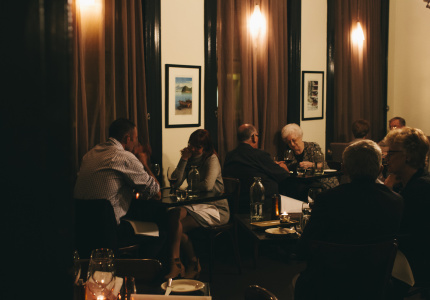