Exploring the Menu at the Cutler & Co Bar

After a recent renovation, Cutler & Co’s front bar is back with a vengeance, and its own menu. When chef-restaurateur Andrew McConnell opened Cutler & Co in 2008, the front bar was almost a separate entity. It was a place to drop in for wine and snacks, at a time when Gertrude Street didn’t have much else going for it in that department. Then the dining room swallowed it up.

But after the restaurant’s renovation in March, the bar – loaded with bronze detailing and a large open kitchen – is back, as a destination in its own right, with a personality and menu distinct from the fine diner.

“When the bar was just an additional dining space and you walked into the restaurant, it was really subdued and quiet,” says chef Chris Watson. “Now, there’s a lot of energy and excitement and we really pump up the tunes in that area.”

“We’re trying to provide an area that’s in the same building but with a totally different vibe,” he says. “But it was important it didn’t take anything away from what we’re doing next door at Marion in terms of the offering and the menu structure.”

Maybe so, but it does function a lot like Marion. Stop in, order exactly as many plates as you need to fill the space in your belly (okay, maybe one or two more), then move on. You could have a full dinner here, or just an aperitif.

The wide-ranging menu is completely separate to the restaurant’s and runs to almost 20 dishes. There are two constants: cheese and seafood, which appear in almost every dish. “We wanted to put a list together of the things we would like to eat ourselves when we’re out for a drink,” Watson says. 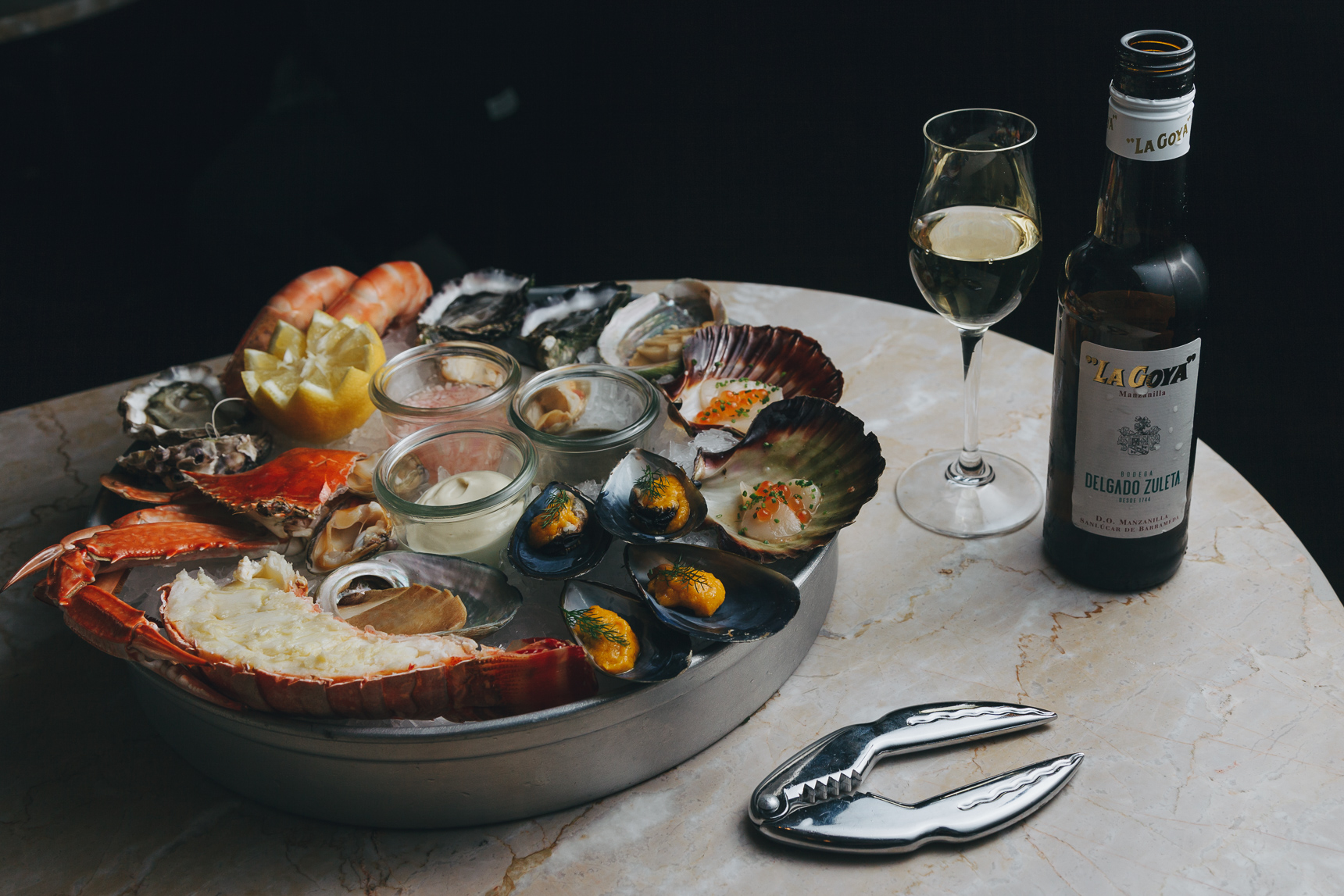 In French, this literally translates as “fruits of the sea” – or in less poetic terms, a huge platter of fresh seafood. Cutler & Co’s includes abalone, scallops, oysters, clams, mussels, spanner crab, prawns and a range of condiments.

“It’s hard to come across a good seafood platter in Melbourne,” Watson says. “I’ve certainly never seen it anywhere in Melbourne delivered to the standard we’re aiming for. We’re getting hand-dived scallops, hand-dived Victorian sea urchin, amazing prawns from Queensland. We’re making sure that every single thing that goes on there is the best that we can get.”

And the Andrew McConnell group’s “best” is nothing to scoff at. It has the necessary clout to get the top seafood, and cycles through it quickly enough that everything that hits your plate is super fresh. 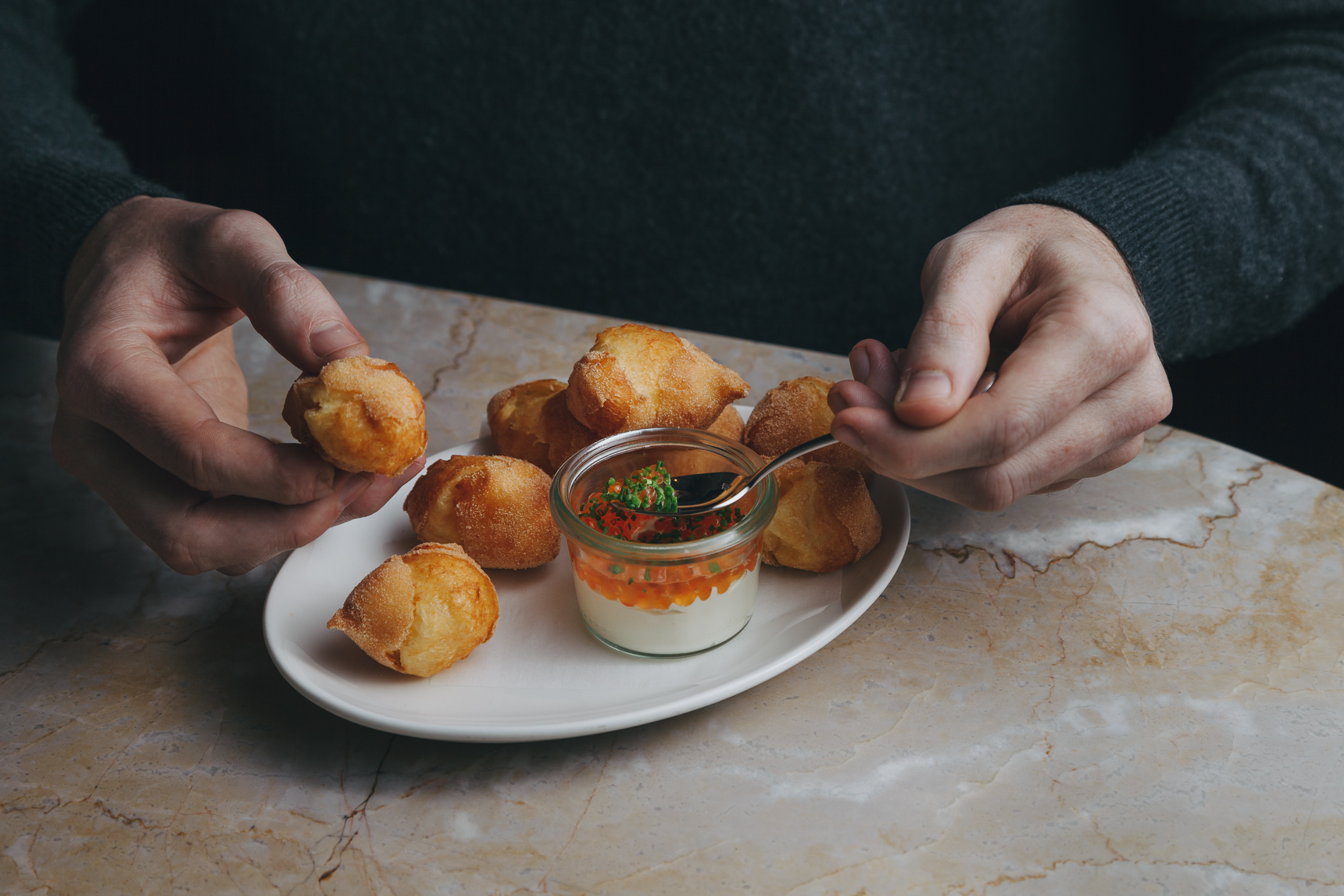 These fluffy, irregular orbs are a playful riff on the classic combination of caviar and blinis. They’re not like doughnuts, really. The pastry is actually the much lighter choux (“shoe”), the same kind used for beignets and profiteroles. The chefs roll the balls in semolina before frying, to add a bit of texture.

And texture is what this dish is about. The warm, airy choux contrasts beautifully with the thick, chilly sour cream. Lest you get bored with this exchange, there are pearls of salmon roe gently popping between your teeth. 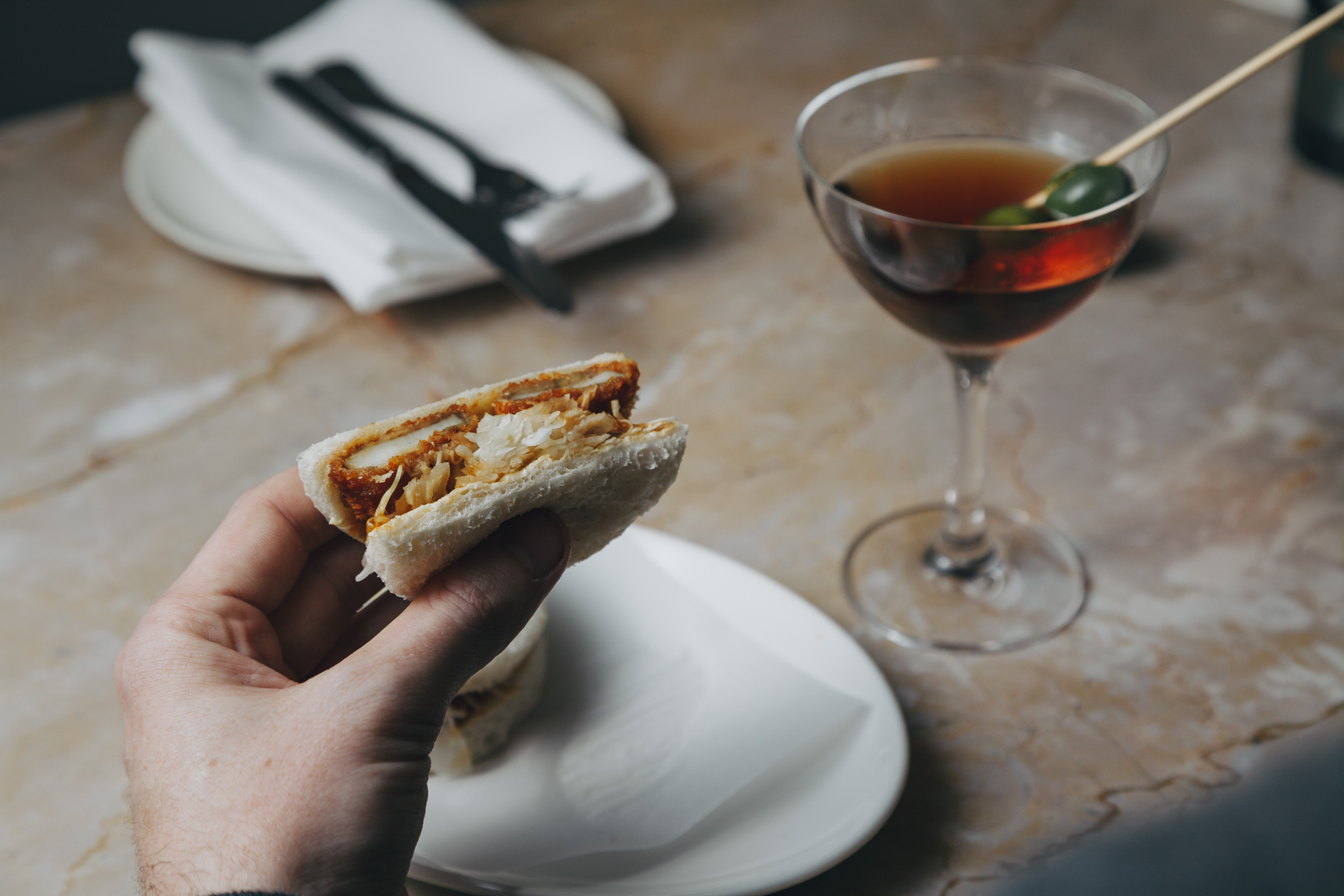 Long-time McConnell fans will recognise this dish as one of the chef’s own. “He serves the pork katsu at Supernormal and we thought because we have that strong seafood focus in the bar, that abalone would work really well, texturally and with the flavour,” Watson says.

The abalone is crumbed, deep-fried and placed in a delicate, crustless little sandwich alongside white cabbage and vinegary Bull-Dog-brand tonkatsu sauce, Japan’s take on barbeque sauce. It’s pretty rich, but the acid in the sauce and the blandness of the bread keeps it all in check.

About that bread: “My friend Ben Sears, who just opened a restaurant in Sydney called Paper Bird, he texted me a couple of weeks ago before they opened, to ask what bread we use. He wanted to do a katsu sandwich on the menu there.” 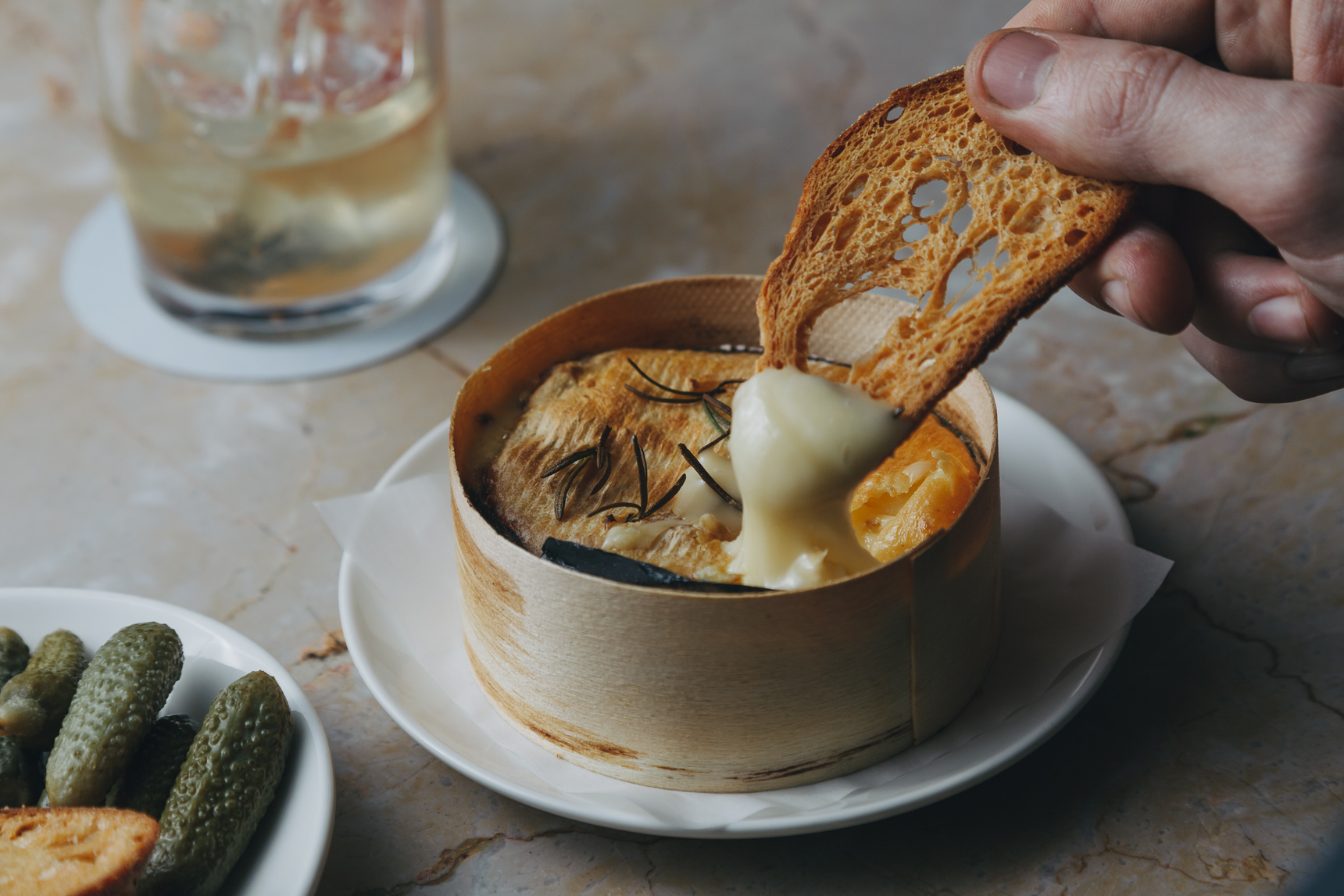 Eat this and you’ll wonder why fondue ever went out of fashion. “It’s a traditional way to serve this type of cheese, just baked in the casing it comes in,” Watson says. “The casing is made from the bark of spruce trees. Then we just add a little white wine, rub the top with garlic and rosemary and bake it. It’s a grown-up, more refined version of fondue, but you can’t really go wrong with melted cheese.”

Too right. The accompanying crispbread is really only a vehicle to get this oozing, slightly stinky, high-fat cow’s milk cheese – not unlike warm brie – into your mouth. There’s cornichons on the side, but you probably won’t pay them much attention. 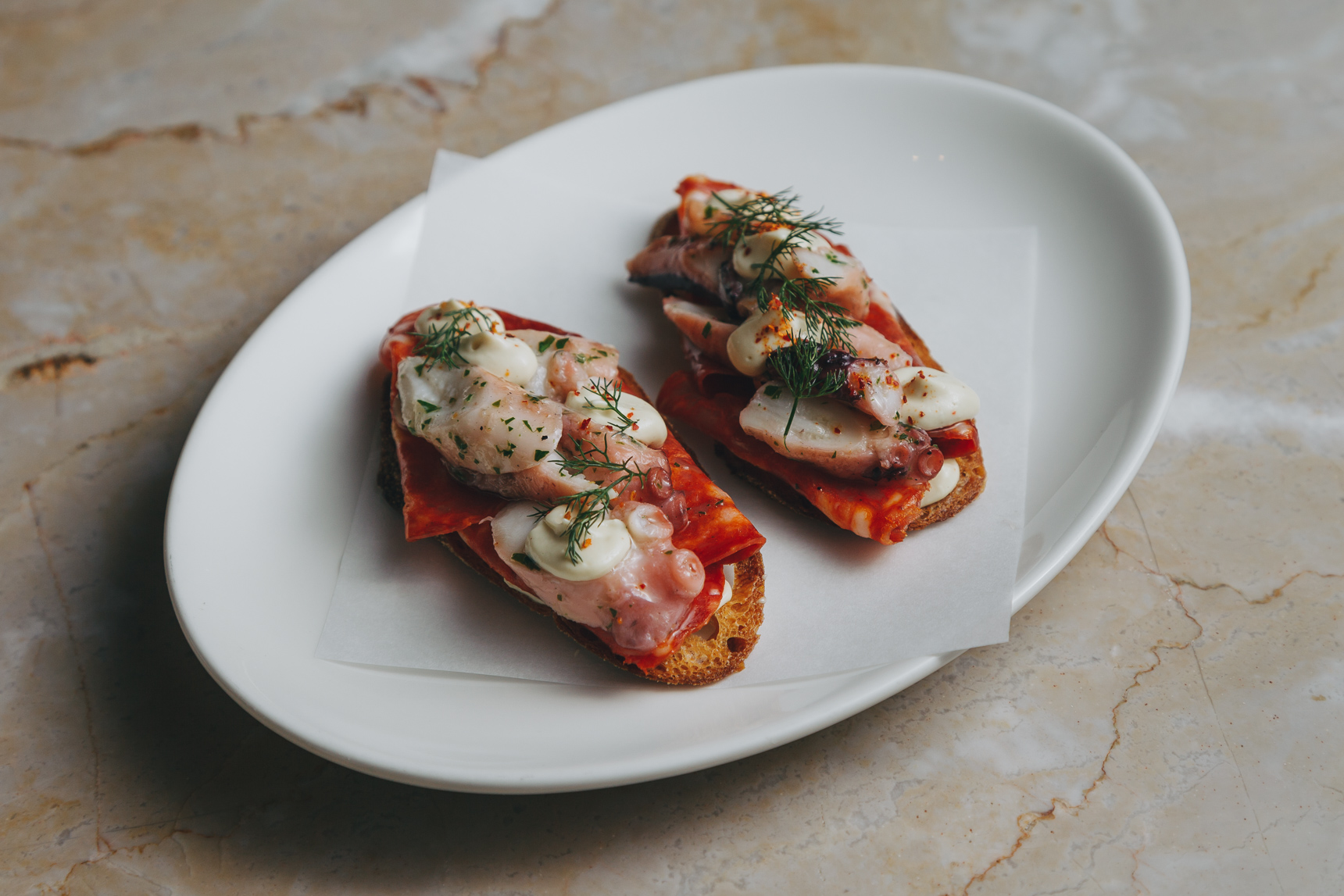 “This was an appetiser we served on the first-ever opening menu at Cutler & Co, about eight years ago,” Watson says. Each serve includes two bite-sized crostini intricately stacked with grilled octopus, thin-sliced chorizo and smoked paprika. A dollop of aioli anchors the whole thing and keeps it from toppling over.

“It’s all big, bold, flavours,” Watson says. “If you put them together on a crouton, it’s got a lot of oomph for one little bite.”