The Espy’s New Owners on Plans for the Melbourne Institution

“As much as we bought the Espy, we’ll never own it.” The Esplanade Hotel closed for renovations in May 2015 and never reopened. Then in March this year, news broke that the St Kilda live-music institution had sold.

The new owners? Sand Hill Road, the hospitality group behind a string of slick refurbished pubs including the Terminus Hotel, the Bridge Hotel, the Prahran Hotel and, most recently, the brand new Garden State Hotel in the city.

After some initial hesitation in purchasing the venue, the group decided to take on what will be a hefty challenge – re-opening a much-loved local pub with a loyal following and a reputation and singular character built over decades.

Andy Mullins, one of the new owners, says the group will preserve the Espy’s iconic status.

“When [the previous owners] sold it to us they said that as much as we bought the Espy, we’ll never own it,” Mullins tells Broadsheet. “And it’s probably one of the only pubs in Australia that that rings true for.

“There are so many people with such a heavily vested interest for what happens to the Espy, and we’d be naive to say that we can buy it and just put in plans. We’ve got to speak to a lot of different stakeholders.”

That doesn’t mean there won’t be a revamp, but Mullins says Sand Hill has looked back at the Espy’s 139-year history for inspiration.

“We’ll take our design cues from the history of the place and that means you’ve got to look back as much as you look forward,” Mullins says. “We’ve got a very keen eye on legacy. We know that St Kilda doesn’t want a brand new, modern-looking pub.”

“It might sound funny but you’ve got to walk through this building and let it talk to you a bit. The Espy is telling us a story and we’re following its leads. We genuinely think that this is Australia’s best pub so it better look like it.”

The fit out of the five-level pub will be helmed by Sand Hill’s longtime collaborator, Melbourne architecture firm Techne. The firms have worked together for more than 15 years.

Mullins says they have also been in close contact with former band bookers and acts that used to play the venue. He confirmed the Espy will continue to be a live-music venue when it reopens: “always was, always will be”.

“We’re not special to say that we love the Espy and that we spent God-knows-how much time there,” Mullins says. “There’s millions of people who would say the same thing.

“Every single person who steps their foot in the door, we want them to instantly recognise what they knew and loved about the Espy. It has to be that way. So we’re really conscious of that.”

Sand Hill is hoping to reopen the Espy in October 2018.

The group will be busy – around the same time as it purchased the Espy, it bought the Waterside Hotel, a 90-year-old pub on the corner of Flinders and King streets.

“A lot of the history of the Waterside is attached to the water, there are some great stories and again we’ve got to find and uncover them,” Mullins says. “Obviously there’s the casino and the aquarium and the Rialto development, so they’re all modern – all things that happened while the Waterside stood there and watched.”

Techne is on board for this redesign too. The Waterside will operate unchanged for the next year or so before work begins.

“The pressure is on us to deliver an intimate, warm pub experience in a pretty bloody big pub, so that’s our design challenge and our operational challenge,” Mullins adds. “Before restaurants and cafes and bars, Melbourne was built in the conversations and relationships that formed in our pubs.

“We’re really passionate about that.” 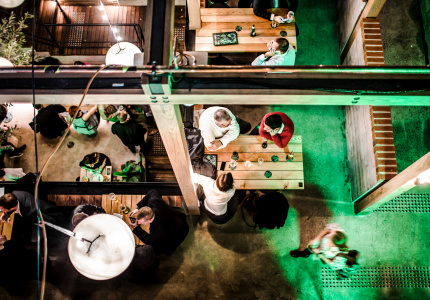