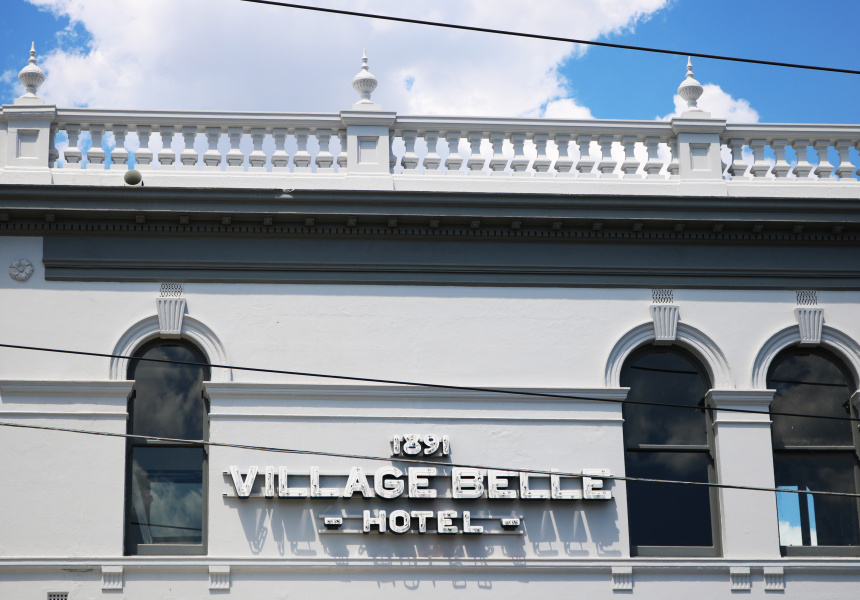 Once a depot for the first local trams, St Kilda’s heritage-listed Village Belle Hotel will reopen its doors in time for summer after a $15 million redevelopment.

“We’ve been there 11 years now but there’s been a pub there since 1855 and the current building since 1891,” owner David Shannon says. “When we first closed it down for the renovations there was a lot of fear that it would be bulldozed like so many other grand hotels – it’s never been on our radar.”

“We always wanted it to be the hotel of St Kilda – somewhere everybody feels comfortable dropping in on the way home from work for a couple of beers.”

Since it opened, the pub has been a stomping ground for some of Melbourne’s most storied characters, including gangster Squizzy Taylor. Keen to preserve that history and character, the owners – together with Technē architects – worked with a heritage consultant to preserve and reinstate important historical features, such as decorative ceiling cornices.

“Over the past 120-odd years a lot of it has fallen or been taken down and it’s all been restored to its former glory of 1891,” says David Shannon.

“We knew what we wanted,” Shannon says. “Being St Kilda especially, we wanted a large beer garden … We also wanted to be able to use it all year round.”

The beer garden has been designed to work in summer and winter, with glazed walls and a retractable roof.

“Even if the roof and the front are all closed, you feel like you’re outside. There’s fully grown trees out there,” says Shannon. “You really do get the impression that you’re in a beer garden. With Melbourne’s weather – like, it just started to rain before – just close it up and carry on.”

Another bar on the mezzanine level overlooks Acland Street and can be booked for private events. The public bar will host live music on the weekends, and is equipped with TVs and a TAB.

Mathew Macartney, the former executive chef of Chateau Yering and The Lake House, is running the kitchen. His menu includes whole fish with almond, caper and burnt-butter sauce alongside chicken parmas.

“Coming from fine dining, Matt’s got a lot of pizzazz,” Shannon says. “We’ll have your parmigiana and steaks, with his sort-of edginess to everything.

“Most of his suppliers are local producers, with a lot of stuff from the Yarra Valley.”

The Village Belle reopens in December.