The Family Making Beers in Cheltenham

A husband-and-wife duo with two young children get brewing support not just from their family, but the entire craft-beer community. 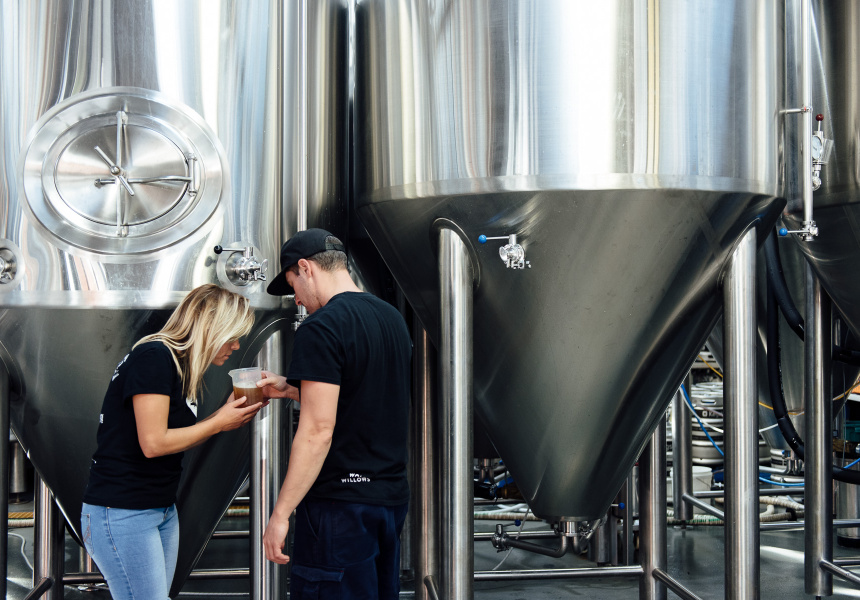 A stylish, suit-wearing wolf looks out from the label of Johnny Smoke Porter beer. But it’s a ruse. The Melbourne brewers behind it, Wolf Of The Willows is no slick operation. And that’s the way they like it.

Husband-and-wife team Scott and Renae McKinnon founded Wolf of the Willows in 2014. Run out of a space in Cheltenham, shared with Bad Shepherd Brewing Co., it’s a true family business. Both the McKinnons’ parents help out, not just with babysitting the pair’s two young children, but also with maintenance. The day I speak with Scott, Renae’s dad – an electrician – is in the brewery fixing their keg-washer.

“It gives us an excuse to hang out and do things together,” says Scott. “It’s a big part of the business and we’re very proud of that.”

In fact it was Scott’s father who introduced him to craft beer through his own homebrews. But it wasn’t until a snowboarding trip to Colorado that Scott fell in love with the modern iteration of craft beer through local brewery New Belgium and its hoppy Amber Ale and Fat Tire.

Returning to Australia, Scott pursued a career in digital marketing and began homebrewing in his spare time. It was Renae’s history in hospitality and experience working for a wine distributor that pushed them to eventually embark on a family journey into the beer industry.

Wolf of the Willows’ core range consists of four beers – an Extra Pale Ale, India Saison Ale, India Pale Ale and a Smoked Porter. The latter is inspired by big Sunday dinners, and its subtle smoky flavours are designed to be paired with food – preferably slow-cooked meat.

The range is driven by the brewers’ own tastes. “We pride ourselves on designing beers for our palate,” says Scott. “All our beers we genuinely enjoy drinking. Sometimes that won’t be in accordance with where sales are, but it makes our beer fridge at home more attractive.”

Having two kids to look after while running a fledgling brewery presents challenges. Scott says the industry has been an enormous source of support.

“[In] the last six weeks we’ve had only one day without an event or a festival,” he says. “When we take our kids, other brewers always keep an eye out for them.” The children will even have mobile numbers written on their arms should they get lost, but with other brewers helping to keep an eye on them there’s rarely a need. “At Ballarat Beer Festival one year, Steve Jeffares (co-founder of Stomping Ground) literally looked after them for about three hours while Renae and I were frantically pouring beers,” says Scott. “I wonder whether that would happen in some other industries. It’s a wonderful thing to see.”