Zumbaron Day is Back This Weekend 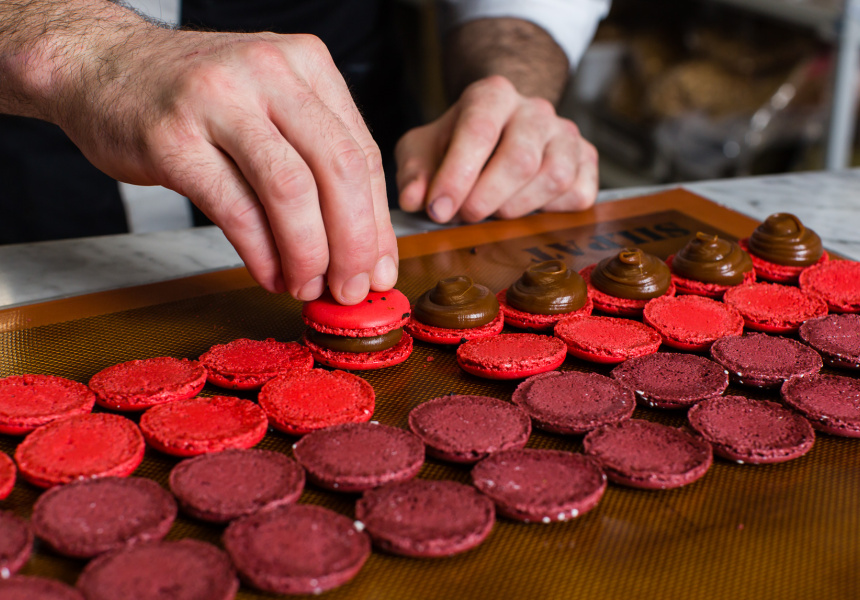 “The weirdest ones are probably the laksa and Thai green curry flavours,” says Adriano Zumbo. He's talking about the headline grabbers of the 60 different types of macarons he’s created for Zumbaron Day. For the event, his patisseries at The Star in Sydney and in South Yarra in Melbourne will sell bizarre and exotic flavours of macarons.

Zumbaron Day was last held in 2012, but because of Zumbo's expanding empire (he now has seven shops), the event was put on hold. For its return, a range of one-off flavours will be available including: grilled-cheese toastie; pork bun; and black sesame seed and condensed milk.

Childhood sweets will also feature prominently. Redskin, Bounty and even Lolly Gobble Bliss Bombs (Zumbo's personal favourite) macarons will be available. “The public always loves those childhood flavours, the things they remember so fondly from when they were a kid,” says Zumbo.

As well as lolly flavours, cocktail-flavoured macarons, such as Cosmopolitan, Gin & Tonic, Old Fashioned and Bloody Mary, will feature. “We've had a lot of feedback that people love the cocktail flavours. For many people, especially the sort of 18-to-35-year-old demographic, cocktails and going to bars are a big part of their life.”

Zumbo will appear at both the Sydney and Melbourne stores on Zumbaron Day – he and his team will operate a live kitchen where he will create macarons, such as custard-fritter flavour, that have to be prepared on the day.

Zumbaron Day will be held on Saturday November 28 at the South Yarra Zumbo store from 7am to 7pm. Adriano Zumbo will be signing books and meeting and greeting between 8am–10am.