This month, self-serve frozen-yoghurt chain Yo-Chi is teaming up with inventive doughnut-makers Doughboys to recreate the classic ice-cream sandwich.

The collaborative dessert, called the Frozen Custard Doughnut Creation, will use a signature cinnamon-sugar-dusted Doughboys Doughsie doughnut as the base, and piped Yo-Chi vanilla frozen custard for the filling. Each creation is topped with raspberry coulis, dark-chocolate sauce and white-chocolate popcorn rubble.

“We discovered frozen custard overseas and fell in love with the idea of having a nostalgic new flavour for the winter,” says Millie Lowndes, Yo-Chi’s research and development chef.

“Our frozen custard is a traditional recipe containing egg yolks, cream, milk and sugar. Although it's served in a similar way to frozen yogurt, the flavour profile is quite different, because the predominant tasting notes come from the custard's base recipe,” says Lowndes.

Doughboys owner Walter McKenzie believes the joint venture is a great way to celebrate the sweet friendship between the two businesses.

“We were both there in the early days of popularity for frozen yoghurt and for doughnuts in Melbourne,” says McKenzie.

“I’d been thinking of doing something with frozen custard at Doughboys for a while,” he says, “and Yo-Chi and Doughboys have a very similar idea about the kind experience we want to make.”

The frozen-custard doughnuts will be made to order from 2pm in all four Yo-Chi stores over three weekends in May (7–8, 14–15 and 21–22). Numbers are limited, so get in early.

Yo-Chi’s vanilla frozen custard will feature as a regular offering on its winter menu. 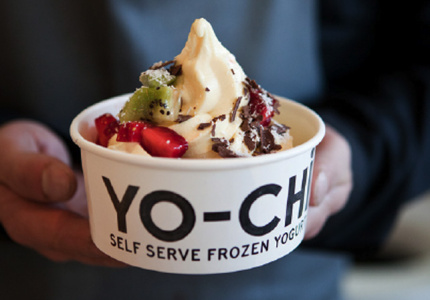