Worth Travelling For: 13 of Victoria’s Best Bakeries

Hitting the open road? Stop off at a charming time capsule of a bakery, a three-time winner of Australia’s best pie, or a discreet bakehouse where sponge cake rules. Photography: Courtesy of Visit the Murray
1/18
by James Williams
Share

There’s nothing quite as glorious as a bakery stopover in a regional town to break up a long-haul drive. Peeling off the highway to stretch your legs, check out the area and pick up a grab-and-go snack. Whether you’re after a classic steak-and-pepper pie, a fancified pastry or a sponge cake that’ll make you turn right around for seconds, here are 13 – a baker’s dozen – bakeries that are worthy of a road trip in their own rights.

Parker Pies, Rutherglen
On Rutherglen’s main drag – in the shadow of the historic Victoria Hotel – is Parker Pies. The 25-year-old family business is self-described as “Australia’s Greatest Pie Shop”, and while we can’t verify that, it’s certainly one of the greats. In the pie warmer, you’ll find two dozen varieties; think classics like steak and pepper with fall-apart chunks of beef; a chicken, ham and mustard pie that has the potential to convert the chicken pie-averse; and a few native Aussie numbers that feature kangaroo and emu.

Red Beard Bakery, Trentham
Red Beard might be hidden down a laneway off Trentham’s High Street, but it’s built a reputation that makes it one of the town’s main attractions. The beloved and award-winning bakery – founded by local hero, the late John Reid – is home to a 75-tonne Scotch oven that’s been there for more than 100 years, which continues to churn out excellent woodfired sourdough. Also find topnotch takes on the usual suspects: pies, sausage rolls and sweets galore.

Rolling Pin Pies & Cakes, Ocean Grove, Queenscliff and Leopold
Regional bakeries aren’t afraid to bandy about a few superlatives, but Rolling Pin got official bragging rights in 2021 when its surf’n’turf pie – the bakery’s signature chunky beef topped with prawns in a rich garlicky, creamy sauce – took out top spot at the Baking Association of Australia’s pie and pastie competition. As well as the surprisingly flavoured prize-winner, expect homey country lamb-and-rosemary pies (among other classic and creative fillings), plus fail-safe pasties and sausage rolls.

Country Cob Bakery, Kyneton, Boronia and Springvale
Before Rolling Pin’s win in 2021, it’s fair to say Country Cob dominated the annual pastry comp. It won for its flaky pepper-beef pie in 2020, for its caramelised-pork and pepper pie in 2019 and its seafood-satay pie in 2018. The trifecta was all about savoury, but it’s worth turning your attention to the sweets display, too. The menu rotates, so there’ll be a few delicious wild cards each time you visit, but mainstays include vanilla slice, custard tarts, eclairs and doughnuts.

Gembrook Bakery, Gembrook
Just up from Gembrook’s Puffing Billy Railway Station, set slightly back from the main street, is where you’ll find this gem of a bakery. It’s a quaint little lunch spot in the foothills of the Dandenong Ranges, often frequented by those adventuring on the heritage steam train. The cabinets hold some classic, no-frills sandwiches, pies and sausages rolls. On the sweets front, expect lemon tarts, tea cakes, apple pies and more.

Ket Baker, Wallington
After outgrowing the kitchen in her garage, Belgian-born, French-trained baker Miek Paulus set up shop in Wallington, a semi-rural township on the Bellarine Peninsula. It’s here she pumps out sourdough, small-batch pastries and standout croissants – each one takes five days to develop its signature flavour and texture. Stock varies daily, but chances are you’ll come across fruit Danishes, lemon chausson (or turnovers) and croissants in flavours like raspberry and hazelnut.

Gum Tree Pies, Yackandandah, Bright, Beechworth and Wodonga
It all started with the Gum Tree Cafe at Yackandandah’s Keeble Garden Centre. But owners Sebastian and Melinda Nedziak’s pies quickly started to steal the show. Eventually, they found a humble shopfront on the town’s main shopping strip, which the couple dedicated to their award-winning pies. Now with four locations, visit for very chunky steak-and-red-wine (or Guinness) pies, a handful of chicken-pie options (including Thai green curry), and a vegetarian-friendly panang curry pumpkin pie.

Tooborac Hotel and Brewery, Tooborac
This name might be familiar to Carlton locals, thanks to Tooborac’s Elgin Street store (which is temporarily closed). But it’s inside a timber-clad shopfront extending from the Tooborac Hotel where the action started. At the classic, National Trust-listed country pub, pick up hearty pastries filled with beef and ale; lamb, potato and rosemary; beef and chilli, and tender rabbit, alongside sesame-speckled sausage rolls.

Warburton Bakery, Warburton
Tucked neatly by the Yarra, Warburton’s time capsule of a bakery is a charming lunch stop on a daytrip to Warburton. Pull up a seat on the tables outside and you might be able to hear the river flowing behind you. Swing by for the classic line-up, plus a standout Stockman’s pie (steak, bacon, egg and cheese). And if you’ve got room for dessert, there’s a local-favourite jelly slice.

Freshwater Creek Cakes, Mount Duneed
Take your foot off the accelerator when zipping along Anglesea Road – a couple of kilometres from the coast ¬– because you’re likely to blink and miss the tiny Freshwater Creek Cakes shop. The discreet bakehouse sells house-made cakes, quiches and biscuits – with an emphasis on pillowy, road-trip-perfect sponge cakes. Bring a bag with you, too, because it’s also stocked with a heap of locally made goods; you might find anything from chocolate-coated lollies and small-batch preserves to candles and native bouquets.

Flinders Sourdough, Flinders
A little dirt driveway sits in front of Flinders Sourdough, where local winemakers turned bakers Margaret Carey and David Alan have restored a historic building, learning the ways of its original woodfired Scotch oven. The pair uses only Victorian ingredients to make a variety of organic sourdough loaves. But if you’re not in the market for a loaf, pop in for the famous “beach buns”, fruit danishes and other assorted sweets.

Johnny Ripe, Main Ridge
Next to an apple orchard, Johnny Ripe is a small-batch bakery hiding along a winding road. Take a detour on your next cruise on the Peninsula and stock up on handmade pies (both sweet and savoury), golden-crusted tarts and other baked goods. Bring your picnic rug along, too, and spread out beneath the lush trees, stare out to the neighbouring lavender fields and – most importantly – tuck into a fresh apple pie.

Bridgewater Bakehouse, Bridgewater and Bendigo
While the vanilla slice is the undisputed star (it was a two-time winner of the Australian Vanilla Slice Triumph in 2018 and 2019), Bridgewater Bakehouse excels in the savoury department, too. Head to the Bridgewater on Loddon bakery for a roast-lamb and gravy pie, filled with succulent slow-roasted lamb shoulder; a chicken-and-cheese pie with a ooey-gooey honey and mustard sauce; and, of course, a “snot block”. 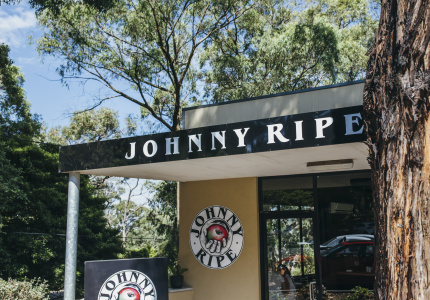