Over the past six years, husband and wife team Scotty and Renae McKinnon have built one of Melbourne’s most exciting and consistently excellent beer brands. Now they finally have a place to call their own – this relaxed, community-minded taproom near Moorabbin Airport. 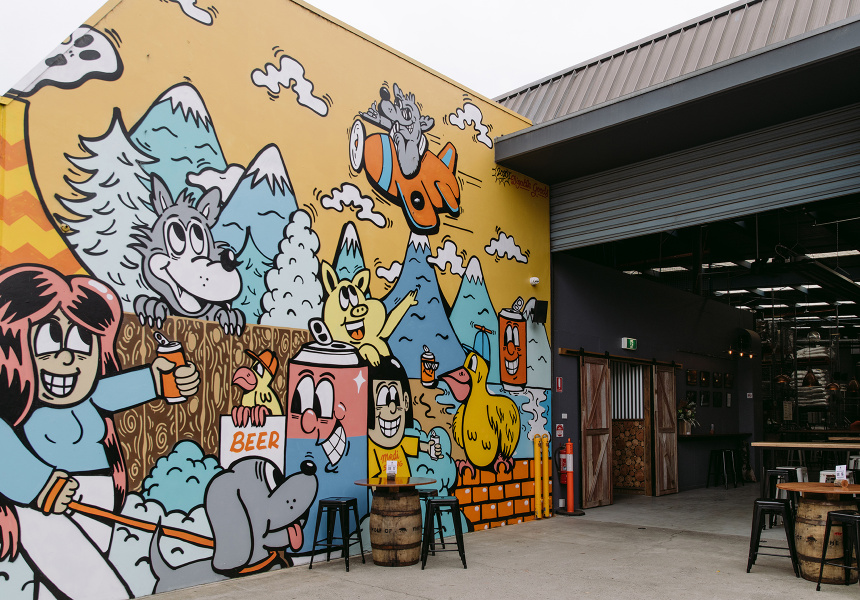 Look above the bar at new Wolf of the Willows taproom in Mordialloc and you’ll spy a quote from Roman philosopher Pliny the Elder. Pliny, so the story goes, named the hop vine lupus salictarius (“wolf of the willows”) for its assertive qualities and tendency to spread wildly, strangling willows as it went.

“He likened the plant to a wolf taking down its prey,” Renae McKinnon says. Renae – and her husband Scotty McKinnon – are key players in the bayside beer community, where breweries are spreading as vigorously as Pliny’s hop vines. There’s Boatrocker, 2 Brothers, Stomping Ground, Dainton and more. Wolf of the Willows has been part of this group since 2014, initially brewing at a facility in Cheltenham shared with Bad Shepherd.

At the new HQ, low-flying, single-engine planes zip right overhead, on their way to nearby Moorabbin Airport. Like many things in the Wolf of the Willows world, the brewery was built on the spirit of collaboration and community.

The naked timber bar, taproom tables and foyer were made by friends using recycled fence palings and snow gum from Gippsland. “It came from a friend’s farm that was hit pretty hard by the fires around Omeo [in January 2020],” Scotty says. Another mate, Marcos Diaz, aka Digable Goods, painted the massive mural at the entrance, depicting beer drinkers, brewery dogs and those ubiquitous little planes.

At the bar, 18 taps are pouring numerous Wolf of the Willows beers, a couple of hard seltzers and a nitrogen-charged cold-brew coffee (from senior brewer Josh Kendal’s side gig, Yukkuri Coffee). Expect the longstanding core beer range – XPA, IPA and pilsner – to stick around, leaving plenty of room for the more adventurous one-offs and collabs.

The styles are broad, never leaning too heavily on any direction or trend. Disco of the Dead, a collab with Tromba Tequila, is a slightly tart ale that combines cinnamon, Madagascan vanilla and guava puree with traditional corn gruel. Tiramibru is a milk porter (a dark beer with added lactose, for more sweetness and body), enriched with Maker coffee and muscat from Campbells Wines in Rutherglen – another fine example of that collaborative spirit.

Food is being served by an old friend, Justin Moran, under the name Van Go (get it?). His food truck sits permanently out front. Expect beer-friendly bites such as mud-crab burgers, pulled-pork tacos, and a twist on the classic Belgian moules frites, combining steamed mussels and fries with green curry sauce. Wolf of the Willows