A weekly hand-picked selection of Melbourne’s best dishes, delivered to your door in one box. We’ve partnered with Providoor on a new, eight-week curation of Melbourne’s best dishes, delivered to your door. And one lucky reader has the chance to win them all.

Since launching in June, Providoor – the high-end delivery service which sees meals expertly prepared by chefs, carefully packaged and delivered to be heated and plated – has become something of an essential service to Melbourne diners.

Kicking off in June with the likes of Maha, Flower Drum, Estelle, Cumulus Inc, Supernormal, Sunda, Tipo 00, Lucy Liu and Movida on board, the offering jumped a notch with the addition of Longrain, Gingerboy, Di Stasio, Entrecôte, Lucy Liu, Stokehouse, Cutler & Co and Mamasita. That announcement coincided with the Broadsheet x Providoor cooking classes, which saw chefs like Shane Delia, Scott Pickett, Andrew McConnell and Frank Camorra, take viewers through the creation of their Providoor dishes during a live Instagram chat on Friday nights.

With Melbourne having shown a true hunger for the service, we’re proud to announce Special Edition Boxes – by Broadsheet, from Providoor.

Featuring a range of dishes from dozens of Melbourne’s best restaurants, Special Edition Boxes see weekly hand-picked selections of the city’s best dishes delivered in one box. Each week for eight weeks, a different themed box will be announced. And each will be available in two versions - meat-eaters and vegetarian plus beverage pairing options.

The dishes in the Baos, Buns and Burgers box will be announced October 14. It must be ordered by Thursday 22 Oct, and will be delivered on Saturday 24 Oct.

The following week’s box – conveniently timed with Derby Day – features items from Maha, Park Street Pasta & Wine, and Burch & Purchase. Available as of October 21, it must be ordered by October 29 for delivery on Saturday October 31.

Boxes will be delivered on Saturdays only, and are currently available to be delivered to Metro Melbourne, Geelong, Greater Geelong and the Mornington Peninsula. Check Providoor to confirm your location. An optional beverage pairing with each box can also be added to the order.

Win them all
This competition has now closed. 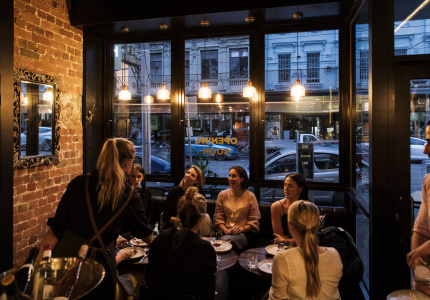