Why Are Bands Brewing Beer? 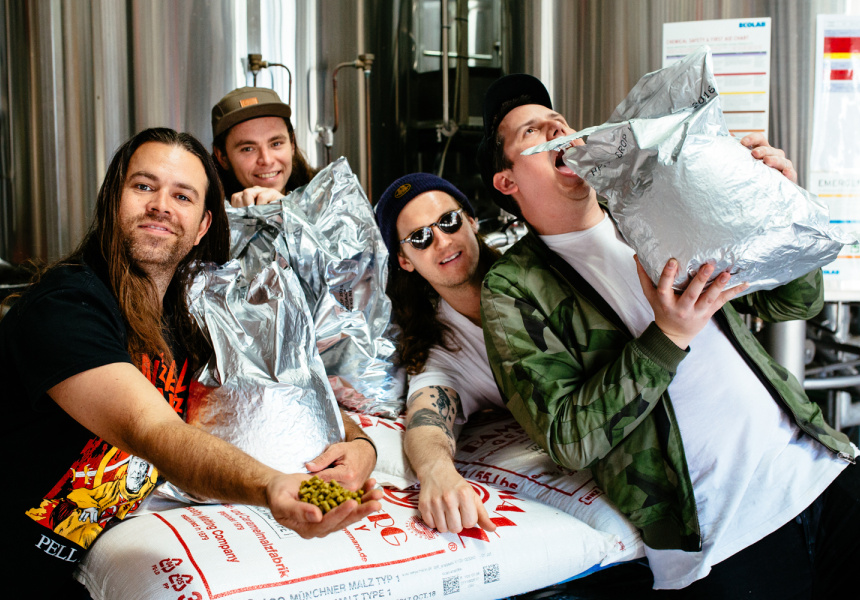 A brewery at 7am was the last place Simon Ridley from Brisbane band DZ Deathrays wanted to be. Not because he and bandmate Shane Parsons aren’t fans of beer, but because they’d been up late playing a music festival the night before.

“We were pretty dusty that morning,” Ridley admits. “It was potent in there. It was heat and beer; hot and hoppy.”

A hazy, late-night conversation Ridley had with a brewer from Young Henrys months earlier had led to this moment. Now the band stood facing giant vats and boiling pots, about to brew the first batch of beer named in their honour.

The resulting brew was called Pils ‘n’ Thrills, a Czech Pilsner that paid tongue-in-cheek homage to DZ’s fast-and-loose party music. Nine months later and the 8000 litres they made is down to the last four bottles. These will not be cellared.

A collaboration between good-time bands and scientifically minded brewers might seem odd at first. But Young Henrys co-founder, Oscar McMahon, says the rise of craft breweries in Australia over the past 10 years has meant attitudes towards beer consumption have changed.

“People are becoming more educated about what beer can be,” says McMahon. “Collaboration has become such an important word in the last decade. We’re seeing people from different walks of life working together on projects more than ever before, and I think that’s really exciting. Plus at least 50 per cent of our staff plays in bands, including myself.”

That might explain why DZ Deathrays is just the latest in a tradition of Australian bands making beer with Young Henrys. The first was Sydney’s Crow, which made a black lager called Black En More in 2013. It was tailored to mirror its dark, intense rock. Frenzal Rhomb, Front End Loader and You Am I have also worked with the brewers.

“It’s fun,” says McMahon. “It inspires our brewers. We’d rather do small batches of beer we care about than pump out one type of beer and try to get into every place in the world.”

In northern NSW a new collaboration between regional craft brewery Stone & Wood and Brisbane band Violent Soho has resulted in a drop called East Coast Crusher. Named after the train that used to service the area’s cane fields, the beer resembles a German ale, but is brewed with all-Australian hops.

“It’s thirsty work, playing in a band,” deadpans Tidswell. He’s speaking down the line from the US, where the band is on tour. “Stone & Wood’s beer tastes like being on the East Coast of Australia,” he says fondly. “It’s a flavour that could only come from Byron Bay.”

Stone & Wood reached out to the band after seeing one of its beers in a Violent Soho music video. Head brewer Caolan Vaughn says making the beer was about returning the favour to the band, which was clearly a fan of the brewery. “For beer to bring people together like this, that’s what really makes it,” says Vaughn. “It’s a beautiful thing to be a part of.”

Tidswell says the brewery and the band share a similar ethos. “We both believe in keeping things simple,” he says. “It’s not about trying to have your music played on every radio station, or your beer sold in every bar.” Vaughn refers to it as “keeping it in the backyard”. “We want to be as sustainable as possible, and that means staying local,” says the brewer. “The craft-beer sector is built around people. It’s about sharing and collaborating, there’s no snobbery.”

There’s also no getting out of putting in the hard work. The Violent Soho boys were on hand for every step of the brewing process. “We did everything by hand,” says Tidswell. “You have no idea how much physical labour goes into the brewing process. We had to manage temperature, make sure things didn't get overcooked. The process took about four hours. Prior to that we chose the hops and actually sat down and went through an exhausting tasting process, so Stone & Wood could work out what we did and didn’t like. It was tough, but somehow we managed."

Fair enough. But what will the beer taste like, apart from the east coast of Australia? Tidswell and Vaughn throw out an unfamiliar adjective: “crushable”. Pardon? “Fresh and crisp,” says Tidswell. “It will leave you with a crush after the first sip. And if that doesn’t work, have another.”

Violent Soho are touring Australia throughout October and November. DZ Deathrays are on tour in December.