Produced by Broadsheet in partnership with Visit Ballarat.

Craft brewing has come a long way from its initial hop-powered punches, making room for session beers, sours and all sorts of specialty brews. Nobody knows that better than Dr Peter Aldred, a long-time brewer now helming the education program at regional brewpub Aunty Jacks. In partnership with Visit Ballarat, Aldred chats to Broadsheet about the regional city’s thriving brewing community. 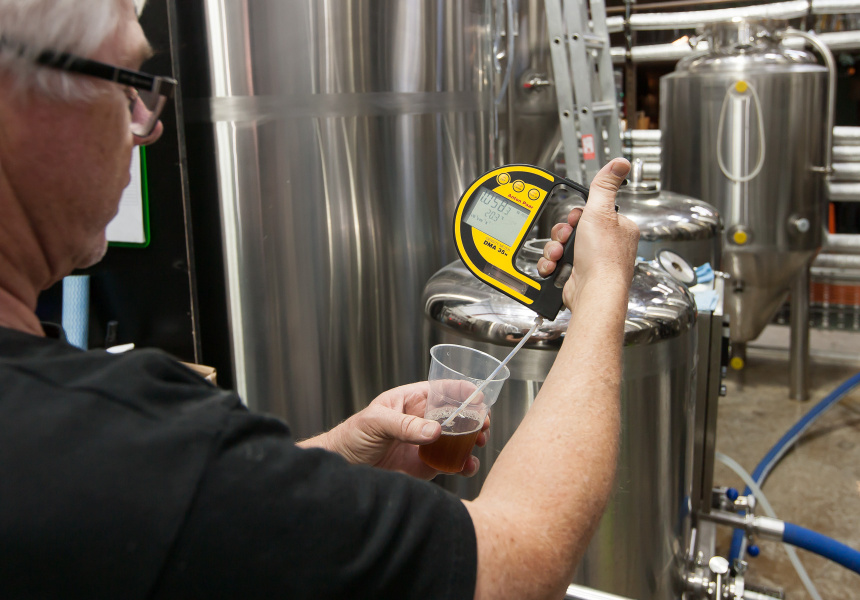 When Peter Aldred tried his hand at homebrewing at the age of 18, he had no way of knowing that he had stumbled upon his calling in life. Several decades later, he’s better known as Dr Beer, a nickname cemented by a PhD in biochemistry and diploma from the Institute of Brewing and Distilling, as well as involvement in all areas of the local industry – as a judge, researcher, brewer and educator.

After early stints with Carlton & United Breweries and the Australian International Beer Awards, and many years spent lecturing on the subjects of brewing and biochemistry at Ballarat’s Federation University, Aldred is now head brewer at Aunty Jacks, a local brewpub and restaurant where he oversees the annual production of some 100,000 litres of beer.

“Even as a kid, I loved cooking and I loved playing with chemistry sets,” says Aldred. “And brewing is really a combination of those skills: there’s some serious science in understanding what happens in the malting and brewing process, but [also] that wonderful arc of combining flavours to produce a really palatable product.”

The long-time teacher runs educational programs at Aunty Jacks, ranging from the casual Beer School to the more in-depth Craft Academy. Since opening late last year in Ballarat’s CBD, the brewpub’s mission is to not only offer various styles of beer but show curious visitors exactly what goes into each step of the process.

Whether you’re looking to find a new brew of choice or work your way up to the rigorous level of “cicerone” – the equivalent of a beer sommelier – this is the place to do it. Even if guests come in thinking they don’t like craft beer – or they don’t like beer at all – Aldred is confident he can guide them toward a style they’ll appreciate. “Often you get the comment, ‘I don’t normally drink beer,’” he says. “But there’s a whole range of different beers out there. It’s just a matter of finding the right beer style for you.”

He compares it to preferring white wine to red (or vice versa) and notes there are plenty of versatile craft beers around today that don’t rely on hoppy characteristics (and the related bitterness). Sour beers and session ales, for example, make for a refreshing low-alcohol drink. Even the core range at Aunty Jacks demonstrates the widening possibilities, with a German-style lager and vanilla porter sitting comfortably alongside the expected citrusy IPA and Australian pale ale.

The revolving speciality range, meanwhile, might include a cocoa stout, a Bavarian märzen, or an amber ale brewed for the Ballarat Heritage Festival which runs until the end of May. When possible, the ingredients are kept fresh and local – whether it’s cocoa and chocolate nibs from nearby Grounded Pleasures for the aforementioned stout, or malt from Ballarat institution Joe White Maltings.

Though Aunty Jacks has only been open for about six months, it fits neatly in a town that’s always been bursting with breweries. Apart from the historic Ballarat Brewing Company and Federation University’s own student-driven brewing operation, the regional centre is currently home to such intimate, distinctive spots as Red Duck and Cubby Haus.

“It’s a good brewing scene, and there’s certainly plenty of scope for expansion,” says Aldred. “We may have five breweries in Ballarat, but many of them are catering to different audiences.” He cites the focus on gluten-free beer at O’Brien, the wild ferments and sours from Dollar Bill, plus Red Duck’s more experimental side. “I think we all complement each other really, really well.”

As for managing to convert his one-time hobby into a career, Aldred still sounds amazed. “It was just one of those things that seemed like a good idea at the time,” he says. “I would never have guessed what sort of career I would end up in.”

This article is produced by Broadsheet in partnership with Visit Ballarat.

Produced by Broadsheet in partnership with Visit Ballarat. Learn more about partner content on Broadsheet.