Once a Carpark, Now a Whitehart

On the site of a former carpark, Whitehart is an industrial two-storey spot in the middle of the city. 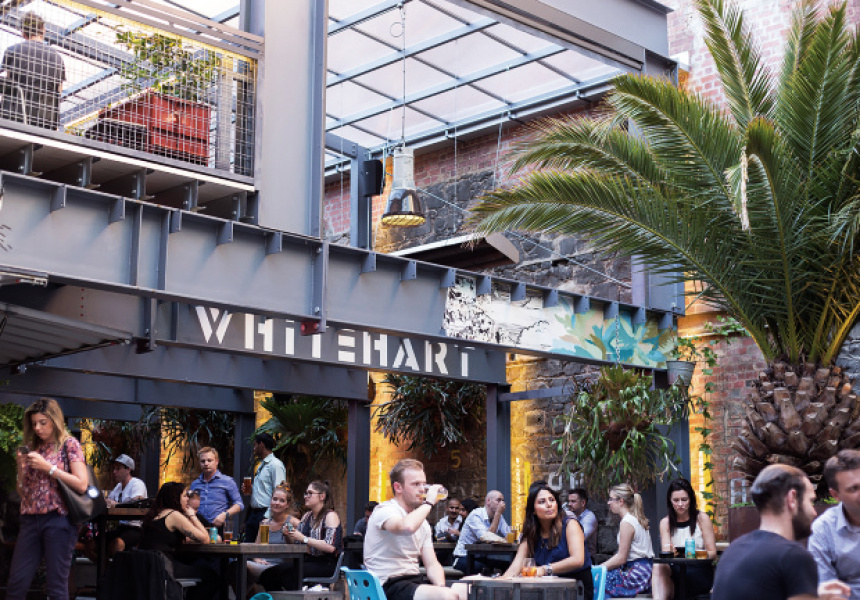 Half an hour before his new bar Whitehart opened in the city, filmmaker Stephen Johnson received a call from Screen Australia telling him it was funding the film he has been working on for 12 years.

“The timing, was just incredible,” Johnson says. His background in film (including his cinematography work for Yothu Yindi) combined with his wife Sabrina Santucci’s work as an art teacher is what allowed the pair to design the bar, their first hospitality project.

Whitehart is a double-storey venue in the CBD, built out of massive steel beams and shipping containers.

“Building Whitehart was very similar to building a film set,” Johnson says. “In both processes you have to consult and use a huge number of people.”

“The site was actually a car park that we had been parking in for years,” says Johnson. “The land hadn’t been dug up in over 100 years, so we found all sorts of things, including heaps of bluestone, which we’ve repurposed into some of our seating.”

Santucci also has hospitality experience, which she says was “before the internet”, when she headed the kitchen at the Adelphi Hotel.

The menu will change constantly, as Whitehart plans to host a rotation of different food vendors – the first is Ironbark BBQ. Chefs will have Whitehart’s 2.5-tonne smoker to play with, which is already churning out chicken wings, beef brisket and slow-cooked pork.

There are also smaller snacks, from peanuts in their shells to hummus (Santucci’s recipe) and salted lupini beans, which accompany a drinks list focused on craft beers and cocktails. Poor Tom's Earl Grey Spritz (a cocktail on tap) is already a crowd favourite, combining gin, tea syrup, lemon juice and soda. Wine comes from Australia and Europe.

Johnson and Santucci are also encouraging local musicians to approach them for performance opportunities, as they envision unplugged sessions at night.

When there isn’t live music, the tunes are “anything but top 40” including “a mix of soul and funk,” says Santucci.

The space’s heavy industrial feel is made warmer with ferns mounted on the walls.

“The choice of plants honours the white hart,” says Santucci of the bar, and the mystical stag for which it is named. What are the fern species? Staghorn and elkhorn.