Lately we’ve been thinking quite a bit about all sorts of ways to drink bourbon. We spoke to two ladytenders about their favourite whiskey cocktails, which include a refreshing take on the Negroni and a tart New York sour. 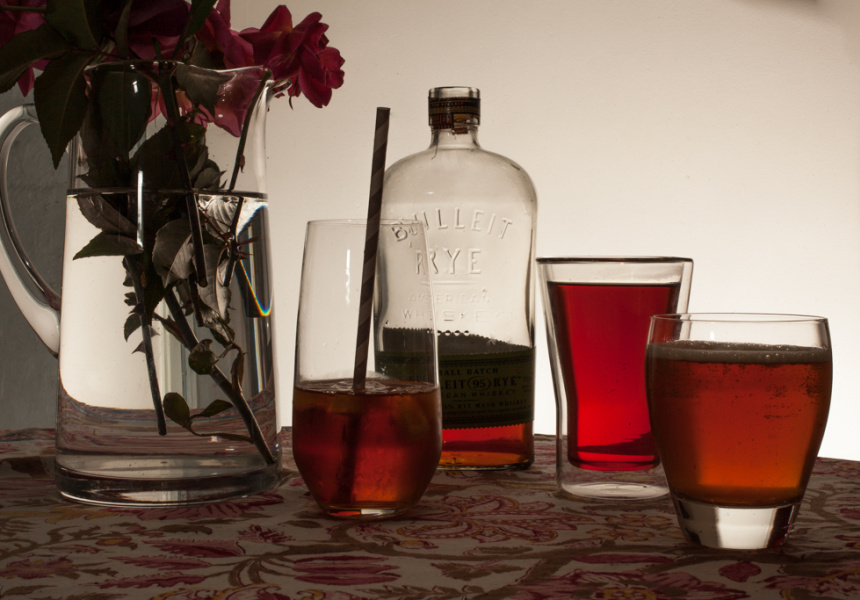 We’ve been talking about barbeque a lot over the past few weeks, but as yet we haven’t discussed one of its regular accompaniments: bourbon. While Bulleit Bourbon founder, Tom Bulleit, advises that you take it just like they do in the south, with a couple of ice-cubes or two, there’s are countless ways to enjoy it.

“What I like about bourbon is that it’s really diverse. You can use it in pretty-much anything,” says bartender Sarah Miller, who’s only recently opened the doors on her new Franklin Street bar, Loch and Key. “The range of American whiskey is so huge. You get all these different flavours depending on how old it is, where it comes from, how long it sits in the barrel.”

The Beaufort’s resident cocktail shaker, Emma Ramos, formerly of Milk and Honey, Class Magazine and The Everleigh, likes to use bourbon as an introduction. “It’s a good dark spirit for people who are a little bit afraid to try the darker spirits,” says Ramos. “It’s a lot more user-friendly than say cognac or scotch, because it’s got that sweetness to it. It’s less fiery than rye, and it doesn’t really give you a headache.”

We asked the bartenders to give us a few of their favourite bourbon cocktail recipes to mix around the barbecue on a Sunday afternoon.

The Boulevardier is Miller’s favourite bourbon cocktail. Essentially a classic Negroni the substitutes bourbon for gin, it’s wonderfully dry and sweet at the same time. “That’s the one I drink the most when it comes to bourbon cocktails,” says Miller. “It’s really simple, but it’s super delicious.”

To make it, simply pour a slug of bourbon and equal parts Campari and Rosso Vermouth into a mixing glass, stir well, and strain into a glass. Serve it straight up with a twist of orange. You can’t go wrong.

The New York Sour is a twist on the classic Whiskey Sour - complete with red wine float - served up by Ramos at the Beaufort. It might sound unusual, but Ramos assures us it’s a winner. “I like it because the dryness and the tannins from the red wine really come through,” she explains.

If you’re game, stick your bourbon, lemon juice, sugar syrup and egg white into an ice-filled mixer. Give it a solid shake, and strain into a rocks glass on ice. Now, here’s the tricky part - top it up with a red wine of your choosing. “Strain it into a rocks glass over ice so it’s got a nice foamy head on it, and then you dash the red wine over the top,” advises Ramos.

Although Ramos is an advocate for the New York Sour, her own personal favourite is The Devil’s Share. “It’s absolutely amazing,” she enthuses. “It’s got fire of the ginger, the nice smoky flavour of the maple, then the orange and the lemon just lift it up. And maple and bourbon go amazing together.”

Making the Devil’s Share is easy: add the bourbon, ginger syrup, orange juice and lemon into an ice-filled shaker, give it a jiggle and strain it over ice. “It’s basically a party in your mouth,” says Ramos.