What the Duk? Australian Electro-Pop Duo Peking Duk Have Opened a Bar 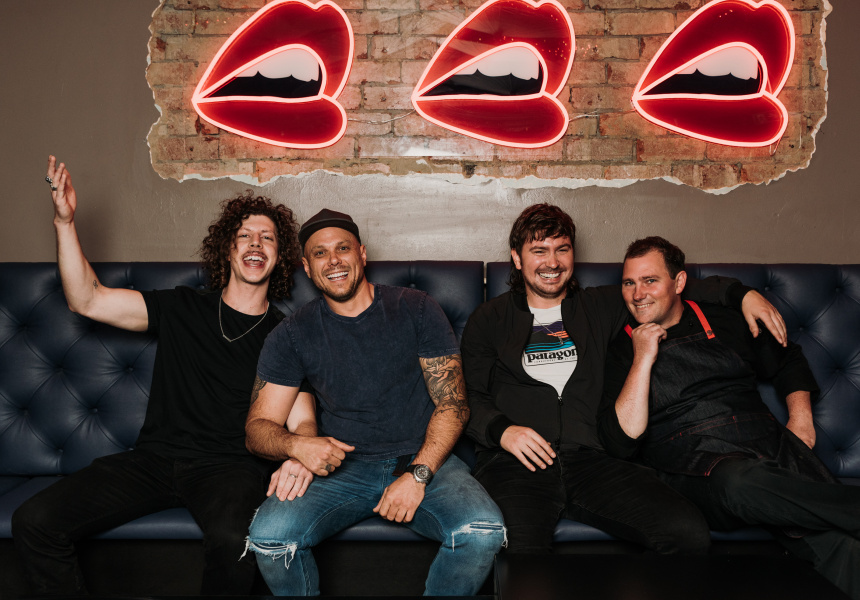 Recently I’ve ended up writing about people attempting to break into unfamiliar worlds. A few weeks ago we ran a story about celebrity chef Shannon Bennett opening a band room. Now we have rockstars opening an Asian-American fusion diner, cocktail bar and dance floor in South Yarra.

The bar is called Talk to Me and the rockstars are Peking Duk – the chart-topping Aussie electro-pop act responsible for hits including High and Take Me Over. Although band members Adam Hyde and Reuben Styles have each spent six years behind coffee machines, and have worked stints at Maccas, they’ve never worked in a bar before. Even though Hyde and Styles have enlisted the help of Sydney publican Steven Hiles, you can’t help but wonder if they’re ready for the fickle Melbourne hospitality market.

On the way home from Talk to Me’s opening night I find myself ranting and raving to my Uber driver about the business’s chance of success. But he stops me and points to an encouraging cardboard air freshner dangling from the rearview mirror. It reads, “If you don’t try you’ll never know”.

Although Hiles isn’t from Melbourne – he opened small bar the Hunter in Mossman, New South Wales, before working for Sydney hospitality mega group Merivale – he sees potential in a city that isn’t stymied by restrictive liquor licensing laws (Hiles’s other venue, crowd-pleasing pub the Horse in Surry Hills, is firmly planted in Sydney’s lockout zone). The trio wants Talk to Me to be enjoyed by all comers.

Hyde and Styles first came across the venue – previously Less Than Zero, a late-night bar known for its hospitality-industry specials – when they were staying over the road at the Cullen and recording the song Stranger.

“There was never anyone out the back, so it felt like we had our own backyard area,” says Hyde.

And it’s in this courtyard that Hyde and and Styles will DJ once a month, and throw parties they hope will draw in musician friends they’ve met through touring.

“We want to create a bit of community mentality of making sure we bring our homies that are in town travelling,” says Hyde. “Regardless of whether they're rock musicians or rappers or DJs we can bring them through. I can DJ while they rap. A lot of rock bands love DJing now too.”

Also in the courtyard is a tree carved from a tree by competitive chainsaw sculptor Rob Bast, whose other work includes likenesses of Willie Nelson and a robot demon from the video game Doom. The tree, which is home to a small wooden duck, comes straight out of the concrete floor with little fake breaks painted around its base. It also glows. As does its canopy that stretches out over the courtyard.

The mystic trunk is strangely fitting for the rest of the building, which Steve says looks “like a witches house”. But it’s also the most obvious sign of a design process that everyone involved in admits was impulsive. There’s a whole wall covered in framed cross-stitch art that Hyde says are a nod to Irish pub The Phoenix in Canberra. From the mezzanine level’s roof hang more than 100 backlit paper umbrellas.

“They’d just go, ‘Steve we want some umbrellas on the roof. We want some lights behind it. Make that happen,” says Hiles.

“It's pretty funny ‘cause you look at it on paper and it's a fucking mess,” says Hyde. “But I think once you're in there you feel it, it's cool for sure.”

“Jim took it to the next level and put some sesame seeds on top like you would have on a cheeseburger bun,” says Hiles.

There’s some seafood and a vegan section on the madhouse Asian-American-fusion menu, which jumps styles as much as the fit-out does. But then again, most venues don’t have the audacity to fill a courtyard with a giant glowing tree. It’s food to prep you for partying, after all, and it’s much harder to dance with a head full of biodynamic wine and a belly full of tartare than it is with Espresso Martini coursing through your veins.The Espresso Martini variation here features Ratu chocolate rum, coffee liqueur and five-spice syrup. One cocktail even comes with a thumb-sized zip-lock plastic bag filled with white something pinned to it. You get the idea.

Back to the Uber, and driver Muhammad Ahmed is pointing at the encouraging air freshener.

I ask Ahmed if he can recall a time when he followed the advice of that little cardboard mantra and suceeded at something he felt unprepared for. He tells me that as a young student in Pakistan he struggled in school and almost failed to pass year 10. The experience left him thinking he wasn’t smart enough to succeed in life but eventually his brother convinced him to go for his accounting papers.

Ahmed’s story exposes the hypocrisy and cynicism in my misgivings about Talk to Me. After all, it was only 18 months ago that, despite being wildly under-qualified, I took a punt on a career as a writer that so far is paying off. So even if the boys from Peking Duk are inexperienced in the bar game, who the hell am I to cast doubt on someone else’s dream.

Ahmed has no idea who Peking Duk are but before I get out of his cab he imparts one last line of pure optimism regarding the success of Talk to Me.

“In your perception you say it’s very hard, I agree. But I say the risk factor is high, but there are chances for success as well.”