A new online portal is here to bring you hard-to-get French wine. 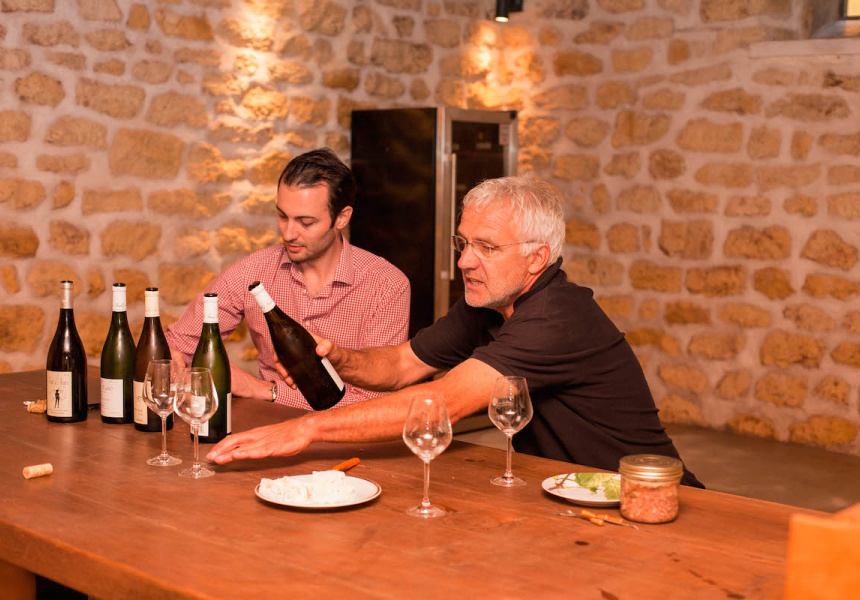 Last we heard, Frenchman Alexandre Rougeot had found love, moved to Melbourne and started working for New Zealand’s Craggy Range winery. But then the self-described “project of a lifetime” came along: Clos Cachet (klo kash-ey), an online store to connect Australians with wine from the Rougeot family vineyards in Burgundy, and other producers around France.

“I was born into the wine industry, so for me it was just the natural way to go,” says Rougeot, whose grandfather, parents and brother still work the family vineyard in a tradition spanning five generations.

The site launched in December, and currently stocks some 50 wines from 10 producers. New shipments are arriving all the time, but Clos Cachet isn’t the sort of place to look if you’re just after a big range.

“A lot of these producers sell their wine almost before harvesting it, and they don’t necessarily need a new client," Rougeot says. Clos Cachet is all about winning these people over on your behalf and securing a share of their hard-to-get wines. It’s a tough task, even for Rougeot, with his French blood and family connections. “The only thing that motivates them is finding someone who’ll do a great job passing on their message and bringing emotion to their wines,” he says.

In that respect, Clos Cachet delivers. It’s laid out in such a way as to encourage viewing each producer’s whole range, rather than just isolated products. Each wine has a dedicated page with detailed tasting notes and information. “I didn't want an online wine shop that’s just displayed as a grid,” Rougeot says. “These wines have an extraordinary history and story behind them, and it’s best to approach it that way.”

For the same reason, prices are only shown after users have signed up and logged in, but the current stock ranges from $25 to $140 a bottle. Delivery is free all along the east coast, so long as you order in multiples of six, or spend more than $200.

Until May 31, Clos Cachet is offering a 10 per cent discount to Broadsheet readers. Enter the promo code “BROADSHEET” at check out to apply your discount.

We also asked Rougeot to pick three special wines from his stock and explain their appeal.

“When it comes to champagne, I think the best thing for everyone is the bubbles. With Paillard, it’s designed to be as silky as possible. So it has a nice texture, and also great complexity. Non-vintages like this are designed to be drunk as soon as they're released. With this champagne, the vintage is 2009 for the base wine, and 2008 for the reserve wine, so it’s already five years old.”

“A lot of my customers aren’t used to drinking rosé, and especially not this style. Every time they try this, they’re just like, ‘Wow!’ Rosé is definitely a style we should drink more of – it’s subtle, aromatic and refreshing. But the main element with rosé is the drinkability. The rosé in Australia used to be known for being sugary and heavy. Now a lot of new producers are starting to do the classic Provence style, which is dry and fruity, but here you have the real thing. You can pair it with spicy food, or Provençal flavours such as olive oil, lemon, garlic, tomatoes or mixed salads. It also goes well with Asian food."

“This is part of what Clos Cachet is about – providing some very exclusive wines. Meursault Charmes is a Premier Cru from Burgundy, which basically means it’s top of the range. It’s just the most complex style of chardonnay you could find in the world. Meursault is well known as the world capital of dry white wine, and this is from a tiny vineyard in the village. It’s a wine that could age for 10 to 15 years in a good cellar, though you could drink it earlier if you want. You can pair it with a large range of seafood, pan-seared blue-eye fillets, foie gras or duck terrine.”