Wayne ‘Lotek’ Bennett Marches to His Own Beat

London-raised rapper, musician and producer Wayne Bennett chats to us about mashing lo-fi tracks, winning the Mercury Prize and where to find a good curry. 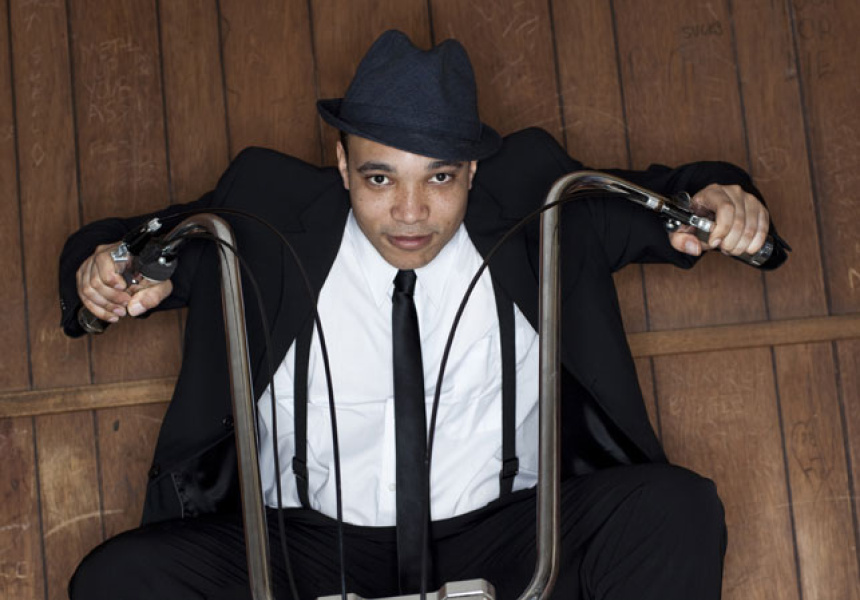 Wayne ‘Lotek’ Bennett is sitting in the middle of his studio in Collingwood, pulling apart an old speaker and switching over the wires. He is working patiently, unhooking the tiny wires and re-soldering them onto the brass plate inside the top of the timber casing. “I bought the speaker from an op shop in Smith Street,” he says. “I’m switching the wires so I can use it as a microphone for a kick drum.”

Wayne Bennett is no ordinary person. As a child he spent his time inside re-wiring speakers when the other kids were still awkwardly negotiating training wheels. His brother gave him the nickname ‘Lotek’ – now his stage name – because he had a knack for turning obsolete electronic parts into lo-fi recording equipment.

Bennett’s work, too, reflects this curious intellect. He constructs organic, highly original mashes of lo-fi and homemade sounds. Each work he produces relies distinctly on place for its character. He knows himself well and shows me some teeth when I ask him about his offbeat production style, like he expected the question. “One of the most important things to try and achieve in music is creating your own sound,” he says. “Most of the music that people idolise from the 60s and 70s was defined by the studio it was recorded in.” He talks passionately about music production, admitting he is more interested in the way music is put together and recorded than actually composing it.

Bennett moved to Melbourne from London, where he had been working as a producer and performing solo hip-hop as Lotek, as well as working with iconic British rapper Roots Manuva for 10 years. One of his first collaborations once in Melbourne was in 2009, teaming veteran Melbourne hip-hop producer Plutonic Lab to cut young UK rapper Speech Debelle’s debut album Speech Therapy, which went onto win the Mercury Prize in England in the same year, over pop heavyweights Florence + the Machine, Kasabian and La Roux.

The album is a defining example of Bennett’s production style, and at odds with what you might expect from a Mercury Prize winner. It has charm in abundance, but is hard to place in any sort of mainstream landscape. Like everything that Bennett has produced to date, it’s unpretentious and sounds exactly as it is – in this case, a vulnerable English poet in the backyard of her producer’s Footscray home.

The experience was equally as incongruous for Bennett. “Winning the Mercury Prize was weird, especially as the record was, and still is, largely unknown. We were 1000/1 to when the nominees were announced, up against artists who had sold in excess of 300,000 copies.”

Later on in the evening, Bennett suggests we take the short walk down to Victoria Street in Richmond, to eat at an unnamed Indian kitchen (his favourite), where they cook traditional Indian dishes and naan bread on top of red-hot 44-gallon drums. The place is full of late-shift Indian cab drivers – a good sign. “There isn’t a menu, you just point to whatever you feel like eating and they serve it up,” he says, poking the glass of the bain-marie. He loves the parts of Melbourne that are most like London – the multiculturalism and the Indian and Vietnamese food around Richmond and Collingwood.

We sit down at one of the dirty tables and Bennett speaks tells me of his plans. “I’m hoping I can get Chali 2na (Jurassic 5) in here when he comes down in December,” he says between mouthfuls of curry. “We’ve been talking about recording something together for years now.”

When it comes to Melbourne, it seems that Bennett is pretty set. “I like working with anyone who makes music that excites me – geography isn’t a factor.”

Wayne ‘Lotek’ Bennett has worked with Melbourne bands including Electric Empire, Closure in Moscow and San Fran Disco. You can see his solo music at Bar Open in Fitzroy on Friday December 23 and listen to his latest album here.