The Vues and Vision of Shannon Bennett

We chat to Shannon Bennett on sustainability, defining Australia’s food culture and a jaunt to the South of France to write a book. It’s a Friday morning and Shannon Bennett is wrapping up a meeting before moving on to a string of press interviews to promote his latest book 28 Days in Provence. The location for our interview isn’t the glamorous and much talked about Vue de Monde, on the 55th floor of the Rialto’s south tower, but is instead in the north tower, at the Vue offices. There’s no flurry of food prep, no clink of cutlery and china, and no kangaroo-hide table covers – just the sound of phones ringing, of bookings for the restaurant being negotiated and the standard shades of grey that colour any office floor.

But while the business of the Bennett Empire is conducted here, the spectacle of Vue – its highly priced and highly rated menu, served with all the drama and panache of a Broadway show – is saved for that restaurant with a view. The fact that Bennett appears to be as comfortable crunching numbers and participating in staff development as he is manning the pass may help to explain his level of his success. That said, the growth of his business, which includes Bistro Vue, four Café Vue branches, the publication of a number of books and his expanding family (he is now the father to four children) has forced Bennett redefine the role that he plays in the Vue de Monde brand. “It’s about me as a restaurateur now, rather than the restaurant being centred around me as a chef,” he says.

The latest incarnation of Vue de Monde – which first opened 12 years ago in Carlton, relocating to Normanby Chambers in 2005, before its most shift to the Rialto – has had a year to relax into its surrounds. The restaurant’s interior and the menu itself has a decidedly Australian bent; it’s a shift from the considerable French influence that dominated the first two versions.

This acknowledgement of his Australian roots is a deliberate move on Bennett’s part, although he says he’s yet to be able to define Australia’s culinary identity. “If someone said to you, ‘What is Australian food?’ you would get 100 answers,” he says. “We’ve got our Asian boundaries with that food mixed into what we do on a daily basis, and yet we’re cultureless according to a lot of people. We’re not, we just have to be proud of our history. The New Zealanders are really trying to identify a culture around some iconic recipes and I think we should be doing the same.”

Bennett and Vue de Monde’s head chef Cory Campbell have pinpointed the Gold Rush as a peak in Melbourne’s cultural history. “We’re both passionate about identifying our food culture and the Gold Rush was a fascinating time,” says Bennett. “The 1860s to the 1890s was an era that Melbourne will probably never be able to replicate. We were like the Dubai of the world in many ways, so I wonder if we see the same thing happening to Dubai in 100 years when they’re trying to identify their culture.”

Campbell’s role in the kitchen has expanded as Bennett’s has changed. “Cory and I collaborate on dishes, he executes them and my role during service now is more of a mentoring one, and being a guest relations officer in many ways,” he says. But the shift hasn’t always been something Bennett is comfortable with. “It’s certainly not easy. There’s anxiety and separation issues, definitely. But it’s a choice you have to make. Do you want to stay small and operate a restaurant that’s all about you, six days a week, 15 hours a day, or do you want to operate a restaurant where you can work five days a week, mentor a great team, listen to new and refreshing ideas and spend some important time with your family?” he asks.

The new Vue is testament to Bennett’s more relaxed approach. “I think, if anything, the restaurant doesn’t take itself as seriously as it used to,” he says. “Our food has evolved with the design. Every time we’ve moved we’ve had to reassess who we are, think about it and move with the times. For me, moving upstairs was about the great view, but the food and the setting had to be on par with that. Because otherwise I’m going to be known as a novelty restaurant.”

It’s hard to imagine anything Bennett does as a novelty. On the contrary, he seems to approach every project with a single-mindedness and drive that is as considered and fastidious as a Vue de Monde degustation. Take his ambition to make Vue de Monde III the country’s most sustainable restaurant. During the design and build, Bennett and his team researched and implemented a number of green initiatives, including eWater, which is purified without the use of chemicals; rendering the walls with magnesium oxide, a waste product from mining that is 100 per cent fireproof, instead of regular plaster; and installing LED lighting, to name a few. Sustainability might be dear to Bennett’s heart, but he’s quick to explain that there was a business case for the move towards a greener Vue. “Sustainability is easy and it saves you money,” he says. “I want restaurateurs to be able to afford to take on sustainable ideas and make their restaurants more profitable.”

Bennett’s involvement in the Burnham Beeches development in Dandenong is another example of his vigour. Bennett has a half share in the project – an undertaking so great Bennett suspects the local shire council will need help from the State Government simply to understand its extent – with Adam Garrisson, a property developer. The plan is to restore the 1930s estate to its former glory (sustainably, of course) and add a café, bakery, villas, restaurant and function estate to the property. “We want it to be a classic, six-star, amazing hotel. Melbourne really needs some luxury boutique hotels,” says Bennett. “Adam and I get a little bit embarrassed when we have overseas colleagues and friends asking which boutique hotel they should stay at in Melbourne and we can only identify about two.

“If you ask me where to stay in New York, it’s a 20-minute conversation and I want Melbourne to be the same. Melbourne’s CBD is one-quarter of the population of what New York is, so we should have at least a quarter of the hotels it possesses.”

Completion of the project is years away, but the grounds are being utilised. Three and a half acres of the 25-acre property is dedicated to kitchen gardens for Vue de Monde. A truffle farm has also been put in and Bennett expects it to start producing truffles next year.

His latest book 28 Days in Provence was written while on holidays with his family, soon after the Rialto Vue de Monde opened. Bennett trained in France and returns there regularly, and this trip gave him the opportunity to immerse himself in the culinary culture that taught him so much. For the 28 days he spent in Luberon, which is situated in the western part of Provence, Bennett challenged himself to only eat food that was grown and sourced locally.

“This book would not be something I’d write five years ago, but right now it’s something that I’m quite enthusiastic about,” he says. “I had such a great time, the food was incredible, the weather was amazing, the people were amazing and the history…it all fitted together really nicely. Writing the book became a real pleasure. Sitting down and summarising the day was something to do over a bottle of wine at night.”

It may have been one of the few times Bennett actually sat still in a year that saw him execute the most expensive project of his life, but it’s hard to imagine him doing that for very long. “When you’re a restaurateur, you’re never going into retirement,” he says. “There are just always new challenges.”

28 Days in Provence by Shannon Bennett is out now. Published by The Miegunyah Press, $39.99. 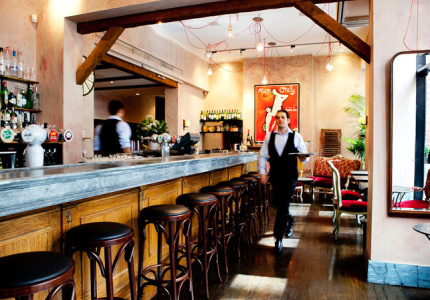