For one night only, one of South Australia's best is coming to Melbourne. 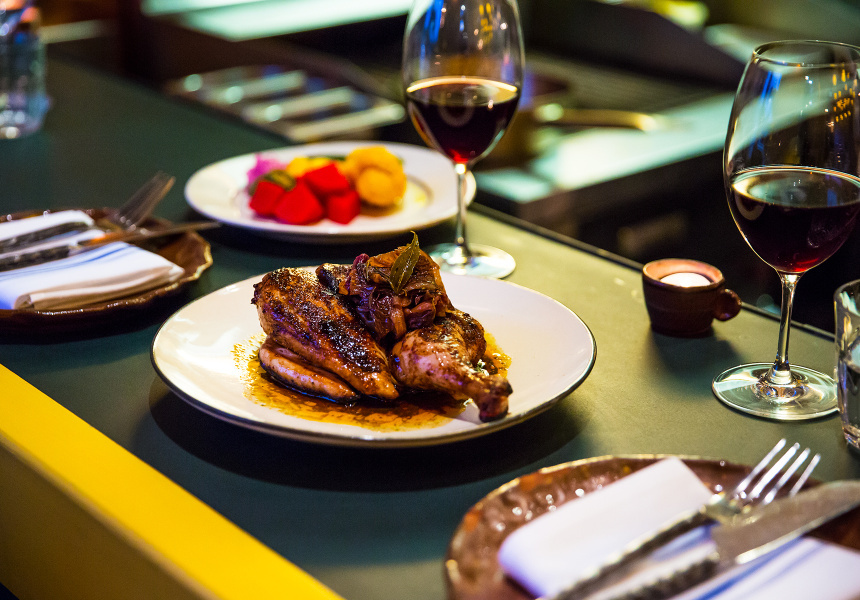 UPDATE: The Vegan Death Metal Dinner Party set for July 6 has been postponed to August. Details on the new date are yet to be announced. We will update this piece as soon as new date has been confirmed.

For a restaurant consistently cited as one of Adelaide’s – and Australia’s – best, these elements are constant, even through Africola's shift in focus from South to North African flavours, and from a protein- heavy menu to one that’s more vegetable-based.

“I went vegan for a bit, to piss off a high-profile vegan, so I understand the challenges,” he says. “At Africola, there's a lot of super interesting vegan dishes –our flavours are pretty unique.”

The decision to collaborate with Shannon Martinez, owner and head chef at Melbourne vegan restaurant Smith and Daughters in Fitzroy seems like an obvious one. But the idea, which will be realised in a one-off dinner in Melbourne on July 6, stemmed from more than just food.

“We both love metal and goth music – we have the same kind of lifestyle. I went onto her Insta profile one day, and I was like, ‘fuck yeah – why don't I know this person? … She's a very, very, talented cook.”

For their Vegan Death Metal Dinner Party, which takes place next Thursday at Smith and Daughters, Welgemoed and Martinez prepare three vegan dishes each – in their own respective North African and South American styles – accompanied by a hand-picked soundtrack of metal. Welgemoed’s dishes will incorporate elements from some Africola favourites – there’ll be cauliflower steak, and seaweed with boomshakalaka (a spicy radicchio relish) – and some surprises.

“He’s the godfather of natural wine in Australia, in my opinion,” Welgemoed says. “He’s a vegan himself. We’ve worked together for about eight years now.”

The event is just one of a number of recent and upcoming collaborations for Africola, including working with Matty Matheson and Fancy Hanks’ Mike Patrick as an ambassador of the Adelaide Beer and Barbecue Festival in July. The restaurant was involved in 24 collaborative events in 2016 alone; these, on top of Welgemoed’s individual projects, keep him extremely busy.

In April, Africola played host to the entire suite of judges from the World’s 50 Best Restaurant, who were in Australia for the Melbourne awards ceremony.

“They were appreciative that it wasn’t another degustation – a lot of them were complaining that they weren’t actually getting any food even though they’d been eating at all these restaurants,” he says. “We gave them some peri-peri chicken, a whole fucking cauliflower with chilli sauce, and a bottle of weird wine.

“There were a lot of hugs, a lot of traded business cards. The way we serve anyone at Africola is you’re gonna sit down, you’re gonna have a good time, and then we’re gonna do shots and get fucking loose – that didn’t change for these guys. At the end of the day, it’s like you’re sitting in my living room, and that’s just how it is.”

This one-off dinner will take place on Thursday July 6 at Smith and Daughters in Melbourne. There are two sittings – one at 6pm and another at 8.30pm. The price is $100 per person and includes wines by Jauma (Basket Range), three dishes by Duncan Welgemoed of Africola, and three by Shannon Martinez of Smith & Daughters.