A Middle Eastern salad bar opens in Northcote by the guys from Munsterhaus. 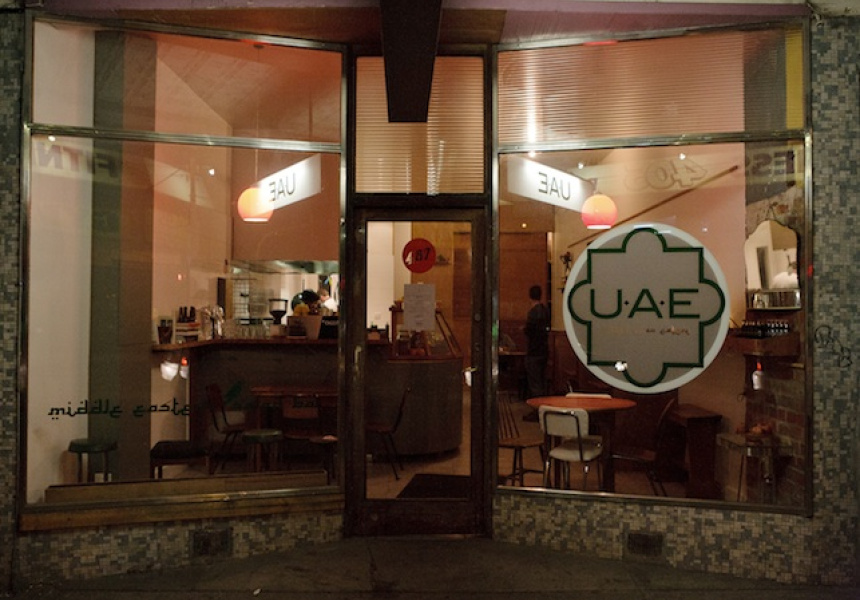 Billed as a Middle Eastern salad bar, United Arab Eatery has opened in Northcote, occupying the tiny shopfront that used to be home to For The Love of Pizza.

Owners Elena Bonnici and Peter Hall recently sold their Fitzroy North vegetarian eatery Munsterhaus, while Bonnici also owns Pizza Meine Leibe (which Hall once managed), just down High Street. So it’s safe to say this pair know what people around these parts want on their plates.

“I suppose we’re creating food that we like to eat ourselves,” says Hall. But the reality is that Melbourne’s love of Middle Eastern fare seems unwavering.

On the counter sit a stack of Turkish cookbooks, hinting at what’s to come. But the fare at United Arab Eatery is also influenced by Lebanese, Syrian and Moroccan cooking techniques and flavours.

The menu structure encourages sharing. “You don’t have to think about it too much,” says Hall.

Indeed, your decision boils down to whether you want your plate to feature meat or if you’d prefer to go vegetarian. Then, much like at Musterhaus, you choose your size (medium at $14, or large at $18).

Fresh, vibrant salads like tabouli (sometimes with lentils, sometimes with quinoa) and fattoush (cucumber, tomato, radish, bread) are always on offer. Your plate might also feature a Moroccan carrot and coriander salad or a fennel and orange number, depending on which vegetables are in season.

Plates also include fresh house-made flat bread, grains, dips (babaganoush will be the staple, but a dip of beetroot or carrot will also make an appearance here and there), olives, feta and pickled vegetables.

If you’ve gone for the meat plate, expect the Arabic dish, lamb kibbeh, or perhaps Lebanese chicken fattee or meatballs. There are also a handful of other options, such as UAE falafel, lamb pizza with rocket and yoghurt, and za’atar pizza with tomato and green olives.

It’s obvious lots of care and thought have gone into the creation of this tiny yet charming bar. If you’re planning to come for dinner, bear in mind there are 20 seats in the whole place. If you’re lucky enough to nab one, get ready for maximum cosiness while you soak in all the delicious Middle Eastern aromas.

But Hall’s plan is to get things running so smoothly that the wait for takeaway will only be about four minutes. This is fast food done seriously well.