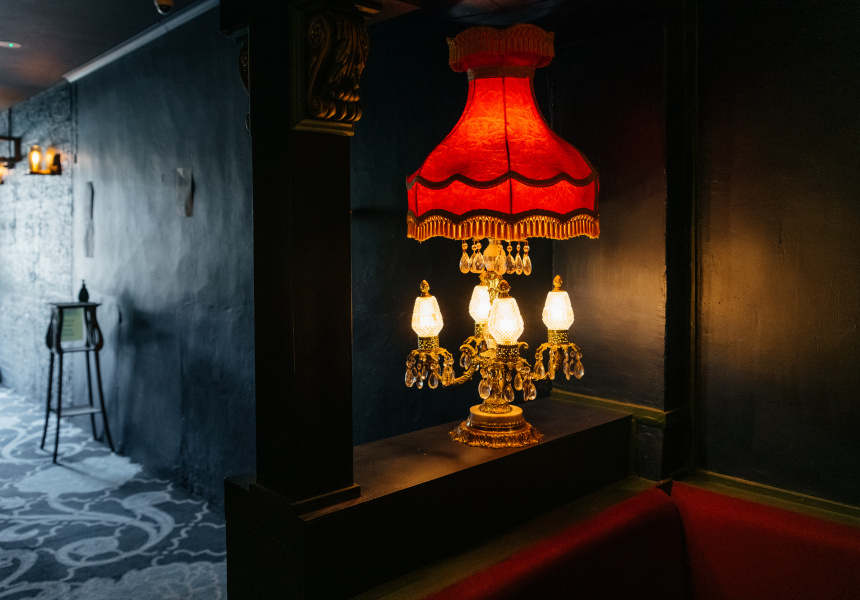 Manager and co-owner Chad Parkhill previously worked behind the bar at Eydie’s and Heartattack and Vine. In 2017 he also published a book, Around the World in 80 Cocktails. Naturally, he’s the driving force behind the drinks here.

This much is evident from Parkhill’s cocktail list, which blends originals with cover versions of influential and interesting drinks from bars worldwide, with each cocktail’s creator getting a menu credit. The fresh, spritz-y and slightly astringent Champagne Cocktail, for example, was invented at New York’s recently shuttered Nitecap and blends the bitter French aperitif Suze with passionfruit liqueur, and cava, a Spanish sparkling wine.

“If people come here and drink a cocktail and they’re like, ‘Oh this is delicious, this is amazing, this Chad guy is a real cocktail wizard,’ I want to be like ‘No, no, you’re not impressed by me, you’re impressed by Natasha David [of Nitecap, New York], or Audrey Saunders [of Pegu Club, New York],’” Parkhill says.

Parkhill’s own creations rotate regularly. The Dream Lover is a riff on a Sloe Gin Fizz, subbing out the typical ingredients to create something more adventurous and unusual. It uses grenadine, caraway-infused aquavit, patxaran (a Basque anise and sloe berry liqueur) and a misting of rosewater. It’s currently off menu due to some difficulty obtaining the obscure patxaran, but will return in future.

In the meantime, try the herbaceous Death in West Footscray, which mixes absinthe, blanc vermouth, apricot, rosemary and sparkling wine, plus one very special ingredient: An Ode to the Green Fairy, a wine fortified with wormwood (the key ingredient in absinthe), fennel, angelica and coriander. Madlore, the company that makes it, is based in West Footscray.

The wine list is natural without being obnoxiously so, listing mostly minimal intervention styles, but with varied flavours and origins. Distinct identity is the brief here. You’ll find a couple of higher-end options served by the glass from a vacuum-sealed Coravin machine, such as Margaret River’s minimal intervention yet classically styled Nocturne chardonnay.

Things can get a little weird too, as in Yugen’s Victorian red-white blend, which combines aromatic gewurztraminer with pinot gris, syrah and textural chardonnay. And the Express Winemakers riesling twists typical riesling flavours into pickled lime and salted lemon. Everything’s poured by the glass, and there’s a handful of nibbles including cheese, charcuterie and Cantabrian anchovies with sourdough.

The space is tiny and rough-hewn (“sprezzatura – a sort of studied carelessness” is how Parkhill describes it), dark enough to hide some sins, and decorated with original art by local Jess Wilson. Parkhill’s brief for the artworks was “boozy tarot surrealist”, and Wilson’s imagery evokes tarot cards the Ace of Cups, the High Priestess, and the Wheel of Fortune. The latter depicts a woman riding a giant slice of citrus like a unicycle, crushing another woman beneath her. A smashed phone, blister pack of paracetamol and slice of pizza are strewn in her wake, portending hangovers for those who gaze upon the scene.