There’s no booze whatsoever. But the “industrial baroque” bar – by a Melbourne distiller that makes gin without the gin – is about more than just one-month-a-year teetotaling. In a nondescript Brunswick East warehouse, it’s got 100-plus drink options, including cleverly curated cocktails, interesting zero-alcohol wine by Non and more. 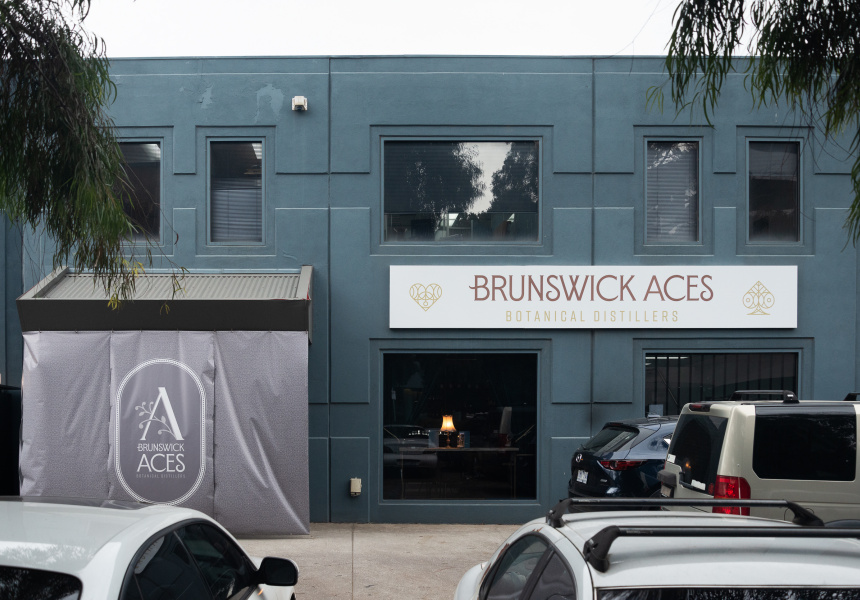 The new venue by Melbourne distiller Brunswick Aces has all the makings of any conventional cocktail spot – bar one.

The thing about this bar is that there’s no booze. In a nondescript Brunswick East warehouse – sandwiched between Temple Brewing and Market Lane’s roastery – is what’s billed as “Australia’s first permanent non-alcoholic bar”.

The concept of a bar without the booze – which sells both Brunswick Aces products and its competitors’ – doesn’t really have the novelty it once might have. We’re all drinking less anyway, and the non-alcoholic category is set to keep booming across the decade. The “trend” is fast becoming normalised, and even for me – a writer and regular boozer with a keen interest in all-things alcoholic – sipping a zero per cent Bridge Road Brewers pale ale feels normal. Once I would’ve naively wondered what the point of it all is, but knowing there are dedicated bars where non-drinkers aren’t out of place feels right for this moment.

Brunswick Aces was born in a local apartment block for the same reason the bar is open today: to bring people together without exclusion. A group of friends started making and drinking beer, wine and spirits – until a few stopped. “One of the girls got pregnant and one of the guys started running a lot of marathons,” says co-founder Stephen Lawrence, who – along with his mates – started distilling gin without the gin for inclusivity’s sake in 2017.

Four years on, at its namesake bar, the drinks menu is satisfyingly vast, with 100-plus beers, wines, spirits and cocktails from a collective of producers keen on banding together.

Lawrence and co-founder Cameron Hunt built the one-of-a-kind stills – visible through big glass panes behind the bar – producing “distillates” with intense flavour but no alcohol. Brunswick Aces calls it “sapiir”, a gin-like botanical-laden tipple that can turn a tonic into a proper drink, or slip seamlessly into a “complex, adult-tasting” cocktail.

The tropical King Louis blends coconut water and a cucumber-mint cordial with the Hearts sapiir (which has notes of sweet citrus and native Australian wattleseed). While the Brunswick – served in a coupe glass – is a speak-easy-style lemon-heavy concoction (made with lemon-husk marmalade, lemon oleo and lemon-verbena-tea syrup) that includes the London dry-style Spades sapiir. The rest of the cocktail list features zero-alcohol spirits from Brunswick Aces’ contemporaries, including Margaret River’s Ovant and Sweden’s Gnista.

You’ll also find zero-alcohol wine by big guys like McGuigan and newcomers like Songbird – from sparkling to pinot noir – as well as an exceptional range of Melbourne-made Non. Plus, there are beers in a multitude of styles including stouts and XPAs, by the likes of Heaps Normal, Upflow and Hawkesbury Brewing.

The team considers the space – an extension of the Key Branding’s bottle designs – “industrial baroque”, and it suits. There’s a welcoming plushness created by brassy fixtures, emerald-coloured velvet drapes and matching round-backed chairs. It’s a classy, homely sort of place that, to its credit, looks and feels just like a business-as-usual cocktail bar.

And that, for the Brunswick Aces team, is the ultimate goal. “Everyone’s got a reason why they don’t want to drink at some point, but they still want to be sociable,” says Lawrence. “And that’s literally the ethos around the business.”