Chalk and Cheese at The Town Mouse 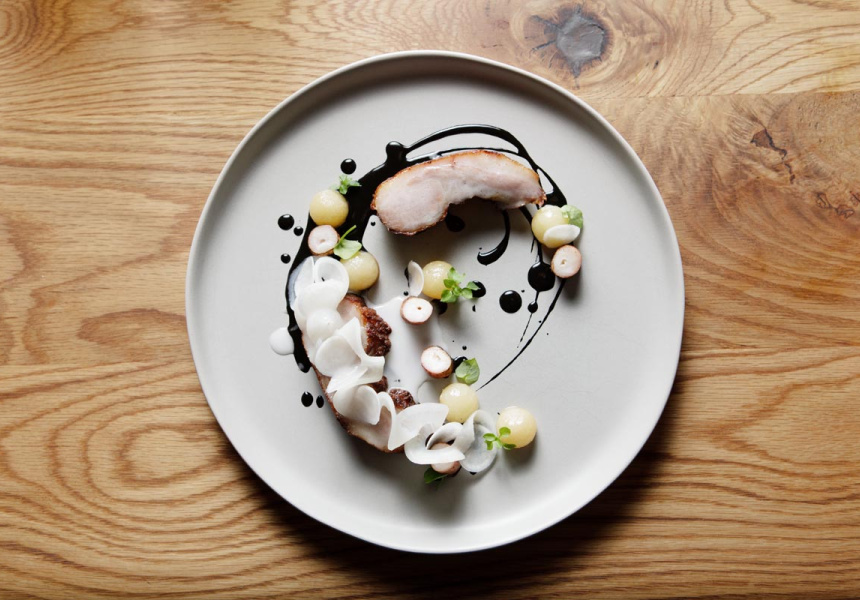 New Zealand chef Dave Verheul, who has taken up the pots and pans at The Town Mouse in the inner city suburb of Carlton, cooks food that is both refined and fiddly and hearty and unfussy.

His all-embracing approach stems from his experience working in marquee establishments both here and abroad. After grounding his skills at Wellington fine-diner Martin Bosley’s, the one time psychology student from Dunedin moved to London’s The Savoy Grill (after waylaying Gordon Ramsay and Josh Emett), where he slaved for up to 17-hours a day under high-profile chef Marcus Wareing for more than two years, but was able to hone his classic training in the process.

He also staged [interned without pay] at several restaurants, including Heston Blumenthal’s The Fat Duck, before joining Brent Savage at The Bentley in Sydney, then returning to Wellington as the head chef at the Matterhorn, where he resuscitated his interest in the modern technique he had started out with at Martin Bosley’s.

Lured to Melbourne by compatriots Christian McCabe and sister Amber, Verheul is promising a menu that is constantly on the go, with the chef continually riffing ideas with his crew – sous chef George Tomlin, chef de partie Mia Coady-Plumb and pastry chef Will Cook – all brought across from the Matterhorn. He took a short break to speak with Broadsheet.

Paul Best: The Drummond street location has pedigree. Hatted restaurants 312 and Embrasse were here. Did you feel under pressure to make The Town Mouse work?

Dave Verheul: Totally, but it’s good. You feed off it.

PB: Tell me about the menu at The Town Mouse?

DV: It’s always changing. A lot of the stuff we opened with was refined versions of stuff I had done at the Matterhorn, like the beef cheek, the cabbage and the venison tartare. We did that because we needed to open strongly, have a product you’re confident in to start with and then move on from that.

PB: How is it evolving?

DV: We have a nice little creative environment where we bounce ideas off each other and push things forward, and a bit of time now in the kitchen to come up with…things that are a little more involved and simpler.

PB: There seems to be a focus on vegetarian dishes, like the slow-cooked red cabbage?

DV: We just try and put as much thought into it as everything else. You don't have to eat meat all the time. At the moment, we sell so many of them we almost need another chef just to prep the cabbage.

PB: The cabbage contrasts with many of your other dishes, which look fiddly?

DV: We just try and balance the things that are small and fiddly with the value-oriented, which are big and generous and welcoming. It’s like what I want to eat – it’s like a big family dinner.

PB: Do you see what you do as fine dining?

DV: Some of it…but it’s not really where I want to go.

PB: Where do you want to go?

DV: To achieve an overall balance of little fiddly dishes (like the calamari with oyster purée, green apple, dill and fermented apple juice or the venison tartare) and some much simpler ones, like the cabbage.

PB: Is it like what you did at Matterhorn?

DV: It’s more a culmination of all the restaurants I’ve worked in. [The Town Mouse] is way more refined than what we were doing at the Matterhorn, just by the sheer fact that people are buying dishes here that would never ever sell in New Zealand, like the kale dish or the calamari dish.

PB: How does the produce compare?

DV: The produce we’re getting here is absolutely incredible. The seafood is amazing and varied. I have an amazing heritage veg supplier who just comes up with amazing stuff, like the best mandarins you’ve ever tasted in your life, crazy weeds and leaves, kales. The Wellington produce is amazing but extremely seasonal and limited. You get artichokes for three weeks, heirloom tomatoes from one or two suppliers for about four weeks. It's super seasonal. We had a huge garden on the Matterhorn roof – 60 boxes of herbs, vegetables and flowers – because we couldn’t buy anything. We had to find seeds and grow it ourselves. But over here I can buy it all.

PB: You personally handle the desserts as well?

DV: I have a lot of experience with desserts. I love the techniques with sugar. I eat a lot of chocolate. My love of desserts comes from my Dutch grandparents.

PB: Will the new outdoor area with an extra 20 seats coming in September impact what you do in the kitchen?

DV: We’ll have lot less room [in the kitchen]. We'll keep things mainly the same. We might put on a few more snacky things at the start but we’re not going to make it like a bar area and serve fries. It'll extend the same casual environment inside, outside.