First Look: Touchstone Brings a Little Gold to a Tree-Lined Street in the North-East 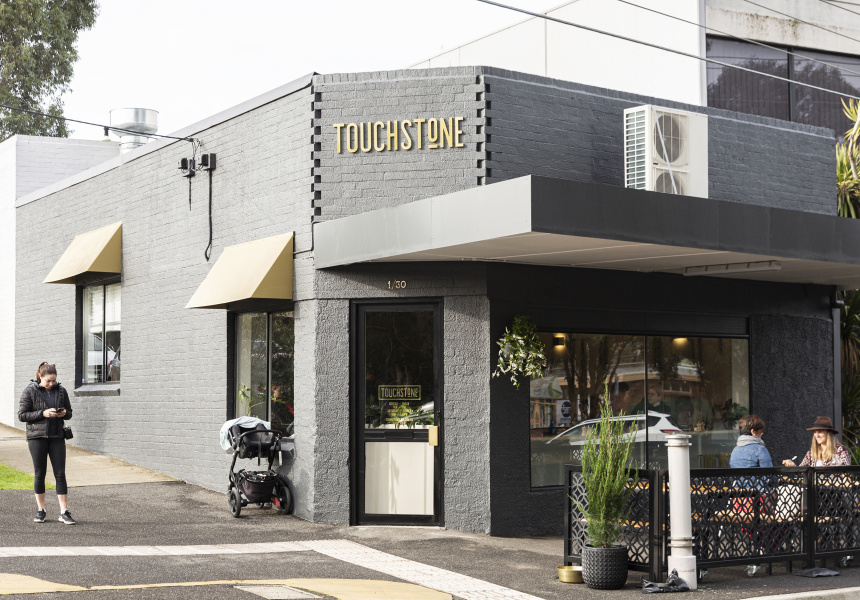 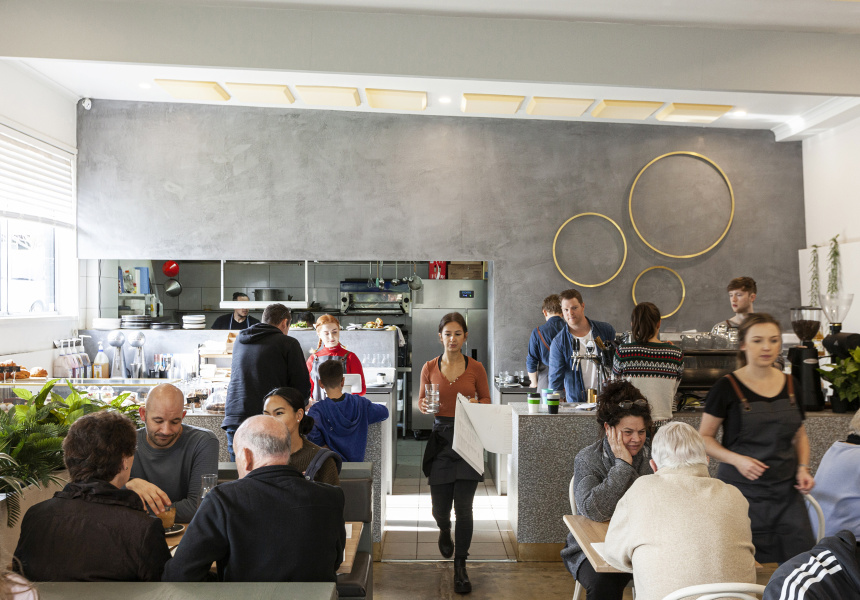 Touchstones were used in ancient times to ascertain the purity of potentially precious metals. As a metaphor, it’s come to mean an established standard or principle by which something is judged. For Patrick and Elisa Horan, owners of the new daytime eatery Touchstone Cafe in the leafy suburb of Macleod, the motivation to be the best in the area is paramount.

“We really want to be a benchmark for this part of town,” says Elisa. “It was important for us to get it right.”

The name informed the fit-out as well, with its stone-grey walls and booths and gold accents.

“We looked up symbols for ancient gold and found a lot of the symbols were circles,” says Elisa. “[Our accents] have been made by bending brass into large circles. We put lights in behind them so they’re backlit and look lovely when you walk past when it’s getting dark.”

The pair reimagined the former ice-cream shop in collaboration with the design team at Studio Pasquale, then Patrick renovated the space himself over nine months, sanding down the floors, building the booths and rendering the walls.

Gumleaf green and dusky pink bring the outside in – those abundant trees, and a park on the other side of the roundabout – and the final touch was Patrick’s penny round mosaic on the ground as you enter. It bears the motto, “No stone unturned”, a reminder of the pair’s vision.

The Horans, who are high-school sweethearts, have long associations with the hospitality industry. Elisa says she started cooking when she was about 14.

“I worked out it was a really good way to get out of trouble with my parents,” she says. “If I cooked them a really nice meal, then I wouldn’t get into so much trouble for whatever I had done. So, I cooked a lot.”

Her love of food led her to the third season of Masterchef in 2011. Patrick ran a mobile coffee cart before he and Elisa bought their first cafe, Fergus in Malvern East.

“I came out of Masterchef, I was still working in advertising and didn’t necessarily want to work full-time in a kitchen, but just loved the food aspect,” Elisa says, before turning to Patrick. “I think it was your harebrained scheme to come up with a hospitality venture together.”

But at Touchstone, Elisa tends to stay out of the kitchen, instead giving chef Ronald Guerra free rein. The most photographed item on the menu is the Snickers panna cotta – milk-chocolate panna cotta offset with salted-macadamia caramel, peanut crumble, marshmallow, and raspberry gel – and it’s the result of a compromise. Elisa wanted a Golden Gaytime version, so Guerra created Golden Gaytime French toast as well, loading it up with vanilla custard, toffee ice-cream and honeycomb, and everyone was happy.

Elsewhere on the menu there’s okonomiyaki (a Japanese-style pancake) made with cabbage, potato and zucchini and topped with maple bacon and a fried egg; miso salmon with soba noodles and edamame; and a beef short-rib burger with a cheesy sauce and chips stuffed inside it. The latter has become a bit of a social experiment for Elisa, who reckons there are two kinds of people: those who take the chips out, and those who leave them in. For little ones, there's scrambled eggs and bacon on toast and kid-size strawberry or chocolate milkshakes.

This article first appeared on Broadsheet on August 22, 2019. Menu items may have changed since publication. 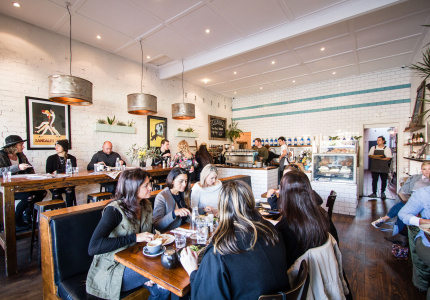