The experimental dessert shop will be at Koko Black for one day only. Get in early for sweet-and-sour Davidson’s plum lamingtons filled with single-origin dark-chocolate ganache; a caramelised-coconut and white-chocolate version; and a decadent triple-chocolate take. 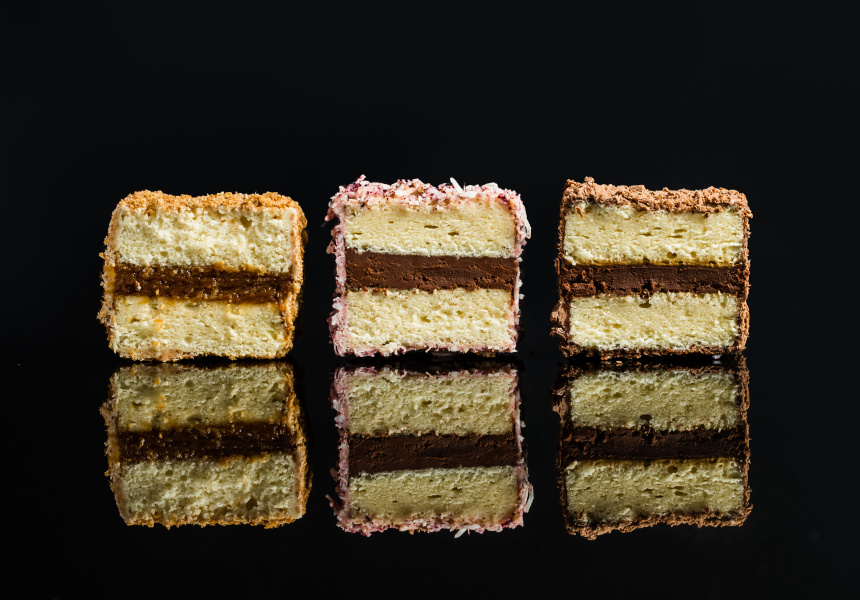 N2 Brunch Club is located in Tokyo’s busy Nihonbashi business district, and serves smashed avocado on toast, corn fritters and loaded pancakes. After a little while, the pair started serving lamingtons too, but in the typically inventive N2 style (the gelateria is known for its quirky, experimental flavour combinations).

“We started doing chocolate, of course, and then we began experimenting with black sesame, choya umeshu [plum wine], matcha,” says Stewart. “The brand just organically grew out of N2.”

The pair now produce the desserts under the brand name Tokyo Lamington, playing with flavours such as milk tea, rose, pandan, salted egg yolk and even instant noodles.

Unlike traditional lamingtons, which use a light and airy sponge-cake, these lavish lamies are made with a denser crumb, a bit like “a cross between a chiffon and a butter cake,” says Stewart.

Now Tokyo Lamington is debuting in Melbourne – but only for one day, setting up shop at chocolatier Koko Black on World Chocolate Day, Tuesday July 7.

There are three flavours on offer, developed by Stewart and Remco Brigou, Koko Black’s head chocolatier.

The first is a sweet-and-sour Davidson’s plum lamington. It’s filled with a single-origin, 80 per cent dark-chocolate ganache, coated in a glaze of white chocolate and Davidson’s plum, then rolled in a mix of coconut flakes and freeze-dried plum.

“This is the one I’m most excited about,” Stewart says. “We’ve actually done a few native flavours before, but for this we really wanted to go for the beautiful colour and flavour of Davidson’s plum. It’s delicious, and you get that really nice zing when you eat it.”

After this pop-up, expect to see more of Tokyo Lamington in Australia. Stewart’s been busy teeing up more collabs for the coming months.

“It just makes sense for us, for now, to do quite a few pop-ups and collaborations first before launching a store,” he says.