Wasted produce is a big problem in Australia and Melbourne-based not-for-profit SecondBite is working to fix it. In April last year, the federal government estimated food waste costs the economy $20 billion a year. It also found Australian consumers throw out 20 per cent of the food they buy, most of it perfectly edible, and yet food-aid organisations are turning away more than 600,000 people seeking food relief every month.

Those are galling figures.

But Melbourne-based not-for-profit SecondBite is working to change them. Founded in 2005, the charity aims to rescue and redistribute nutritious food to those most in need. To date it has saved more than 48-million kilos of food from going to waste and this year will serve its one hundred-millionth meal.

On Monday night SecondBite is holding a Waste Not Want Not Gala Dinner at the MCG, hosted by Masterchef’s Gary Mehigan, George Calombaris and Matt Preston, who’s also a SecondBite ambassador, to fundraise for it’s important work and increase awareness of Australia’s widespread food insecurity. Ten of Melbourne’s best chefs will donate their skills for the dinner, which will cater for 500 guests. The dinner has sold out for the third year in a row.

Broadsheet asked some of those top chefs for their best tips to reduce food waste at home, as well as what they do in the kitchen to keep the bins as empty as possible.

At the restaurant
“We try to always use the whole animal where possible, buy whole beasts and break them down. Yes it’s more time consuming, but it ensures we know where our meat comes from, and that we can then utilise the whole thing. Bones end up as stock, skin becomes a crumble.”

At home
“Only buy what you need, don’t over purchase. Have a rough plan of what you are going to eat or need to cook and try to stick to that ‘shopping list’. It can be hard sometimes when you’re at the market and you see amazing produce and you get excited and go, ‘Argh I’ll buy some of that’, but then chances are it’s still in your fridge a week later and you end up throwing it out.”

“Treat use-by dates as a guideline, food-labelling laws require use-by and best-before dates on everything however certain items like cheese actually get better with age. Trust what you can see, smell and taste”.

At the restaurant
“All of our fish scraps which come from white and pink seafood get minced with other ingredients and turned into fish floss. To make fish floss at home, you take the fish scraps and mince with onion, garlic, ginger, galangal, lime leaves, chilli and lemongrass, then cook on a low heat in a wok with minimal oil until fragrant, very dry and crispy. We use fish floss to season salads.”

At home
“For well over 20 years I've been making our own parmesan oil. To make it at home, slowly heat olive oil with the garlic, rosemary and parmesan rinds (you’ll need to collect a good couple of handfuls before making the oil), until it reaches 120 degrees Celsius. Then remove from the heat, and let it cool before straining.”

At the bakery
“French toast is a great way to use up leftovers, we make a savoury version at the Brighton bakery sprinkled with parmesan. We’re also about to introduce a new coffee-grind redistribution program, where customers can take home our used coffee grinds for their gardens.”

At home
“Breadcrumbs are so versatile. They can be used to make dumplings, soups, fishcakes, gingerbread. To make dried breadcrumbs, whiz up your stale bread in a food processer. Place a thin layer on a tray and bake in the oven overnight on the lowest setting. They’ll keep in the fridge for up to six months in a sealed container.”

At the restaurant
“You can get creative when coming up with ways to use every element of everything you buy. Take fruit and vegetables for example. The humble celeriac can be used in its entirety; I love working with it. Use the peel to put through stocks, it has lots of flavour. The white flesh is really versatile and can be used in a variety of dishes. I like cutting it into pretty little shapes.”

At home
“One of the classic English things to do is make bubble and squeak with Sunday roast leftovers. Smash up the cooked veggies together in a bowl, roll into balls, and add to a hot pan with melted butter. Squash them down as you fry. You can serve the meat cold with the hot bubble and squeak, or chop it up and put it into the mixture.”

The Waste Not Want Not Gala Dinner is now sold out. To volunteer your time or donate food, head to secondbite.org. 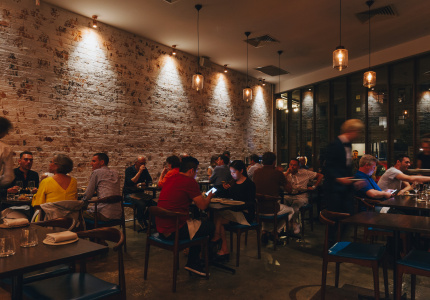