Monforte Viennoiserie is a one-woman show by a pastry chef at All Are Welcome. Go for knockout sweet-and-salty croissants, hazelnut pains au chocolat, and asparagus and goat’s curd pastries. But get in early and be prepared to queue – it almost always sells out. 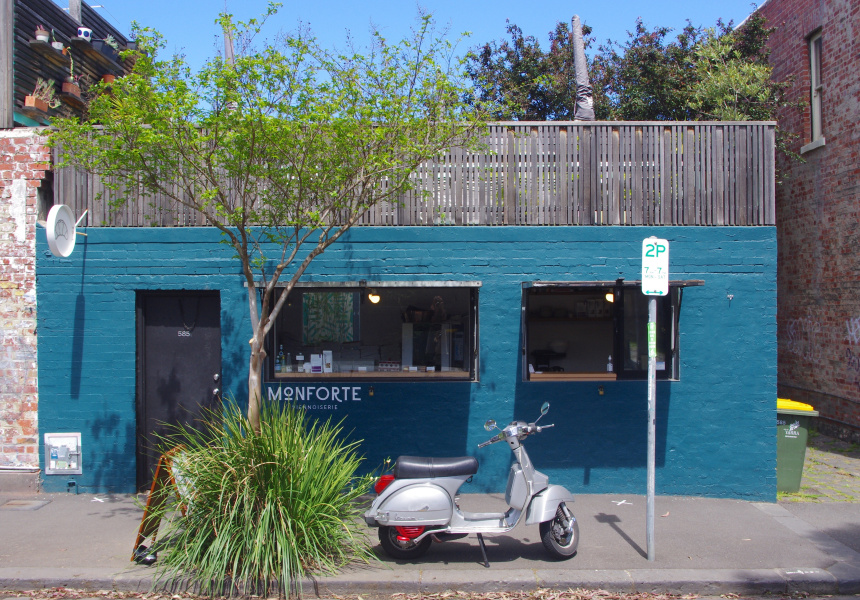 Every day on her way to her pastry-chef job at Northcote’s All Are Welcome, UK-born Giorgia McAllister Forte rides up Canning Street in Carlton North, past Cafe Bu.

“I remember seeing the corner building and thinking, ‘This would be an amazing bakery’,” she says. And then, one day, the doors were closed.

She emailed the team asking if she could lease the space short-term, just a couple days a week. They were keen, so she did. In September, Monforte Viennoiserie – a tiny, two-metre-by-five-metre patisserie – opened quietly in the depths of Melbourne’s second lockdown. And it’s been going gangbusters ever since.

Viennoisieries are a family of pastries made with laminated dough, which includes the croissant. You’ll find plenty of them at Monforte, as well as pains au chocolat and danishes. But much of the menu is made up of esoteric, less-recognisable pastries.

McAllister Forte treats viennoiseries as a jumping-off point – they’re vessels for the flavour combinations she’d like to try and whichever ingredients she happens to be obsessed with. “The flavours are a reflection of what you might get on a plate – just on a pastry instead,” she says.

You might get one loaded with asparagus, goat’s curd, preserved lemon and hazelnut, or one slathered with ‘nduja, fried walnuts and sage. But even the typically classic pastries go off-piste: there’s a croissant that swaps chocolate for gianduja (basically Nutella), and another that subs out ham and cheese for guanciale, parmesan and thyme.

“I want people to try new things,” McAllister Forte says. “Changing the flavours and products is what helps me do that.”

But one item that can’t – that mustn’t – leave the menu is the leatherwood honey and sea salt croissant. It’s one helluva pastry, glazed with a light-refracting honey gloss and wreathed with fat flakes of salt. An instant classic. “That’s not going anywhere,” McAllister Forte assures me. “Initially I was planning on changing it, but I feel like there would be riots if I tried to take it away.”

Now, when she’s not working her regular job at All Are Welcome, she’s baking up a storm in Carlton North on Fridays and Saturdays. And the hard work’s more than paying off. Past Saturday mornings have seen queues curling like a slinky around the corner, ballooned to a comical length thanks to social distancing.

Essentially, get in early. She almost always sells out.