When Victoria’s pear crop was damaged by wild weather, someone came up with a genius marketing campaign. Australian pear farmers (and their fruit) have copped a beating. Earlier this year, two massive hailstorms pummelled the Goulburn Valley, damaging baby fruit no bigger than a thumbnail. It’s a serious blow to the industry, with some growers losing their entire crop, and others left with some ugly-looking produce.

“That’s their yearly income,” says Olivia Tait, market development manager at Apple & Pear Australia Limited (APAL). “Because the growers will have less fruit on the market, they need to salvage what they can.”

This year’s pear crop has been significantly reduced, and the remaining fruit has come through a little worse for wear. Normally, retailers – especially the big supermarkets – reject most produce with nicks and scars because consumers naturally avoid them. But, despite their preference, beauty’s really only skin deep. “The impact is aesthetics more than anything,” says Tait. “In terms of eating, the pears are still healthy and nutritious, and it ripens.”

To help, Tait came up with the “Hailstone Heroes” campaign to promote said minging fruit. She hopes national retailers will come on board to not only accept the homely pears at a reasonable price, but to help out with the marketing campaign. “Instead of writing off all this fruit, we hope it will be sold in the supermarket even though it’s got a few nicks and bumps,” she says. “The idea is to work with the retailers so they’ll improve their specifications, or incorporate some of the damaged fruit.”

The campaign will introduce consumers to two misshapen, anthropomorphic fruit – Battler Pear and Guru Pear. Battler, rather bleakly, entreats: “I’m one of the lucky ones; some of the others didn’t make it”. Guru advises: “Don’t be so superficial; goodness lies within”.

If the campaign’s a little flip, the issue remains a serious one. Eighty per cent of Australian pears are grown within the Goulburn Valley, and if they’re not supported, fruit will inevitably come – in deep, cold storage and nitrous oxide – from overseas. “The broader implication is that we lose growers, and we have to then rely on imported fruit,” says Tait. “That’s the reality of it. The decision you make at the checkout – the implications are huge.”

So, when pear season rolls around next autumn, do your part for Australia and get around some unsightly fruit. 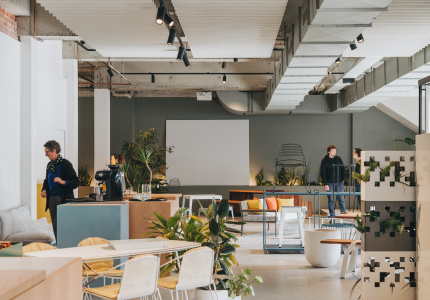