They’re offering curry, spaghetti and fresh produce for those in need – whether you’ve lost your job, lost a hospo shift, or just need a helping hand. 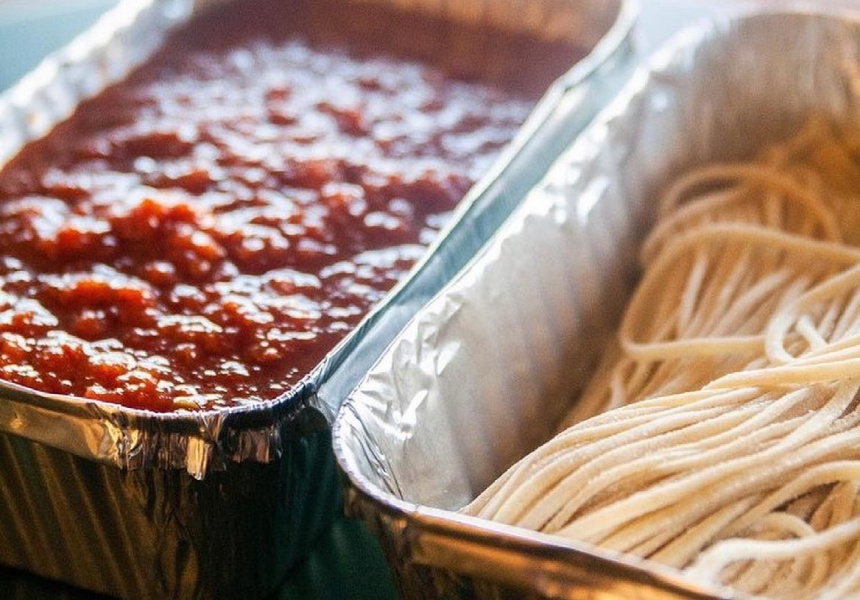 Photography: Courtesy of Taste of Cyprus
1/11
by Chynna Santos
Share

Last year’s lockdowns were difficult, but they also brought out the best in Melbourne’s local community, with dozens of charity initiatives started in response. And while many of them have now ended or closed, a new slate of restaurants, chefs and good Samaritans is taking up the cause.

That includes venues shouting free meals and produce for people doing it tough at the moment – from those who’ve lost their jobs to hospo workers with cancelled shifts, and anyone who just needs a bit of help getting back on their feet.

Daughter in Law, Mr Brownie and Horn Please
Not even two weeks after raising $121,000 to send medical supplies to India through his curry fundraisers, chef-restaurateur Jessi Singh is back to lend a hand.

Three of his venues are shouting curry and rice for those who’ve lost their jobs during the circuit-breaker lockdown. The free meals are available after 5pm daily at Fitzroy North’s Horn Please and from 5pm Wednesday to Saturday at Daughter in Law and Mr Brownie.

Good Gnocchi
On Wednesday June 2, James Eddy of pasta bar Good Gnocchi is giving out vegan spaghetti with Napoli sauce to help anyone struggling – whether they’re a hospo worker with no shifts or just someone in need of a free hot meal.

No need to pre-order, register or ring the diner – just rock up to the Carlton North eatery from 12pm for your free pasta and sauce, which are easy to finish cooking at home. Eddy and team are making around 300 serves and might do it again next week if lockdown extends.

Theodore’s
The Brunswick all-day diner is doing a free cook up and giveaway today, June 1, for anyone who needs a meal – no questions asked. The team has been taking registrations over the last couple of days, but there are still some slots for walk-ins.

Today’s meals include chicken, smoked hock and lentils in a tomato braise, and a vegan option of chickpeas, greens, lemon and herb braise; both are gluten-free. The team has made 100 meals for pick up at 4 Saxon Street, Brunswick, but will be making more if the lockdown continues.

Bar Margaux
Fresh off the back of giving away free pizza at sister venue Heartbreaker on Saturday, the team at Bar Margaux is cooking two soups for hospo workers who need it: French onion soup with gruyere bread and lentil soup with garlic bread (vegetarian). Pick up from the Everleigh, in Fitzroy, between 5pm and 7pm on June 2 and June 3.

The Local Drop
Jagdev Singh is the wine merchant behind The Local Drop, a small bottle shop warehouse in Brunswick East. Now he’s also packing fresh fruit and vegetables into produce boxes for those who’ve lost their jobs or work hours. Today’s box included a six-pack of eggs, spinach, onions, potatoes, celery, mushrooms, mandarins and broccoli, all purchased from restaurant wholesaler Fitzroy Wholefoods, which has experienced a drop in trade due to lockdown.

He’ll be packing them every day for pick-up at 30 Victoria Street, Brunswick East, until “people don’t need them anymore”. Just rock up, no need to call or register; if you have no way of getting to the shop, text Singh at 0431 611 474 and he’ll do what he can to deliver. And if you want to pay it forward or help Singh keep it up, you can donate a box and support the cause.

Barkly’s Kitchen
The pizza and pasta bar has launched a community initiative to deliver free food every day to those in need within a three-kilometre radius of the Brunswick restaurant, including in Brunswick, Brunswick West, Brunswick East, Fitzroy North or Princes Hill.

The free meals – which might include pasta, risotto or pizza – are available for those who desperately need it, including anyone who has been laid off, is in isolation, is at risk or just can’t put food on the table. Order by 2pm and the team will deliver your food later in the afternoon.

Taste of Cyprus
The food truck is currently parked in Hillside in the north-west, and it’s giving away more than 120 souvlaki spread out over five days. Ring up the team and let them know you’re in need – they’ll set a time for you to pick up your free feed.

And a number of other Melbourne venues also showed up for the community over the weekend – Rosheen Kaul of Etta cooked and gave away meal packs on Sunday; Hope St Radio’s Jack Shaw and Nagesh Seethiah of Mauritian pop-up Manze distributed vegan soup and bread; and there were free plain slices of Connie’s Pizza at Heartbreaker for hospitality workers on Saturday.