There’s Something New at Vue, and His Name Is Hugh 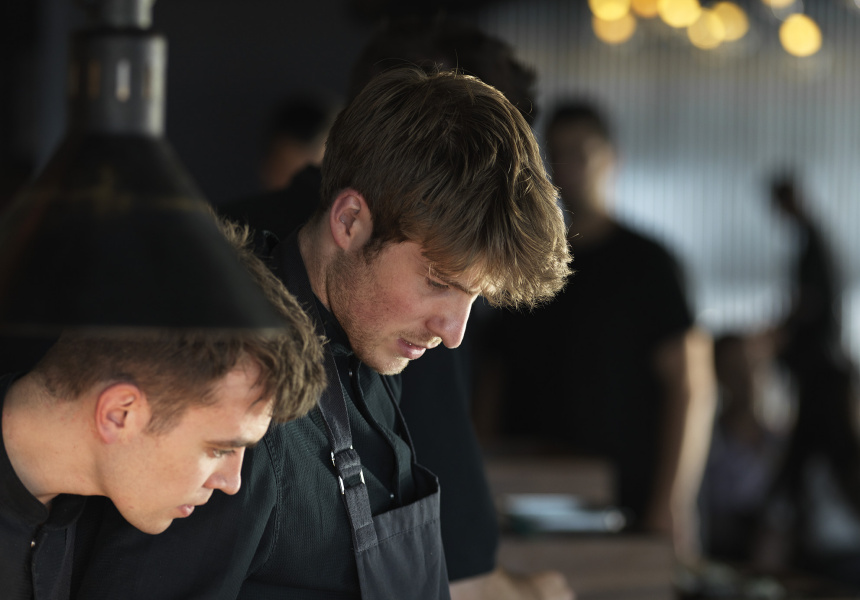 Hugh Allen looks appropriately earnest as he walks around the brooding, elegant Vue de Monde dining room on level 55 of Rialto Tower. Solemnity quickly turns to mischief, though, when he plucks a bottle of 1988 Petrus Pomerol grand vin from Vue’s hallowed wine cellar and pretends to drop it. He smiles, like he’s just broken into a rich uncle’s wine collection, before carefully putting the bottle – worth several thousand dollars – back in its place.

The 24-year-old was recently promoted to executive chef at Shannon Bennett’s renowned fine diner. He’s serious for his age, and ready for the challenge ahead. But he also clearly loves what he does, and seems ready to steam ahead.

Despite his age, Allen is no greenhorn in the kitchen. At 15 he started as an apprentice at Neil Perry’s Rockpool Bar & Grill, where he worked until moving to Vue de Monde. There, as an 18-year-old chef de partie, he won the Gault & Millau Potentialist of the Year Award in 2015. In 2016, he travelled to Copenhagen to ask Rene Redzepi for a job at Noma, arguably the industry’s most famous kitchen, where Allen worked for close to three years. He was also involved in Redzepi’s 2016 Sydney and 2018 Mexico Noma pop-ups. He began his second chapter with Bennett as group sous chef for the Vue Group, though it wasn’t long before he was tapped for the top job on level 55.

Vue de Monde is the flagship restaurant in Bennett’s Vue Group – which includes Iki Jimē, Jardin Tan, Benny Burger and a string of cafes – and it has undergone many changes over the years. It opened in a Carlton terrace building in 2000, then moved to the Normanby Chambers building on Little Collins Street in 2005. After a $10 million renovation, which included kangaroo-leather-clad tables and neon light installations by American conceptual artist Joseph Kosuth, it opened in Rialto Tower in 2011, becoming arguably the restaurant with the best view in town.

The food, too, has undergone significant changes over the years. The once-classic French menu is now far more complex; it has a constantly changing roster of modern Australian degustation wonders. Past highlights include WA marron with beef tongue and brown butter, and the breakfast-inspired fried duck egg with lamb sweet bread and truffle.

Allen says that while Bennett is still hands on at Vue (he splits his time between Melbourne and Byron Bay), he’s really “more of a mentor” to the young chef. The menu will continue to serve two Vue de Monde stalwarts: Moonlight Flat oysters (with a distinctive lemon husk and lemon myrtle vinaigrette), and Bennett’s chocolate soufflé.

“A souvenir from the early [Carlton] days. That will remain,” says Allen.

But despite the odd hanger-on, Allen says he’s striving for “new flavours and experiences”. He says he spends around five hours each day hidden away in the small test kitchen tinkering with ingredients – many native to Australia – and concocting new dishes for his Australian-focused degustation menu (which constantly changes and can reach up to 15 courses).

“We want to celebrate Australia as much as possible, whether that’s with Australian culture or native ingredients,” he says.

“People go to Noma for an experience they haven’t had before … [it] focuses very much on sourcing new and interesting ingredients. We’re definitely going to go on that journey.”