A New Temple of Fire, Steak and Wine

Why you'll be driving to Berwick for dinner. 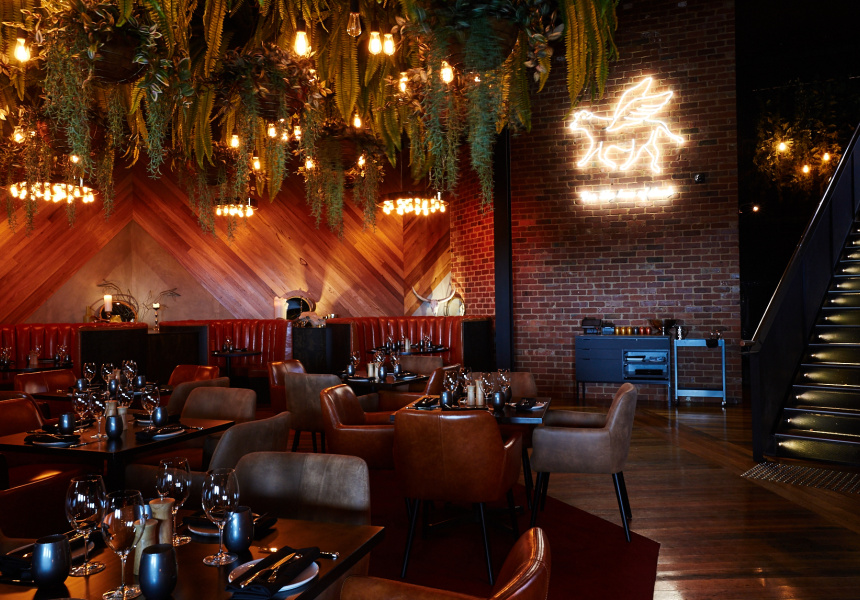 Berwick might not be top of mind when you think of destination dining. But maybe it should be.

MPD Steak Kitchen has some excellent credentials. Its head chef, Chris Bonello, was group executive chef at Vue de Monde. The 250-strong wine cellar, which floats above the bar in a climate-controlled fishtank, was filled by Banjo Harris Plane, formerly of Attica and currently of Bar Liberty (and twice named Australia’s Best Sommelier). Its owners, Victor and Robert Zagame, have poured more than $3 million into the former nightclub, installing clam-shaped leather banquettes, dark-wood tables with brass inlays, and a Grillworks Infierno, an incredible American-made wood-fired grill whose flames touch almost everything on the menu.

“We use wood-fire only, no charcoal. It’s back to basics,” says Bonello. “It’s all native Australian ironbark, sometimes some mallee. We go through a tonne of wood a week.”

The focus, as the name suggests, is beef. Premium cuts come from brand-name suppliers such as David Blackmore, Rangers Valley Black Market and O’Connors. Along with the tomahawks and hanger steaks, some more unusual cuts are on offer, such as the Pope’s Eye steak.

“It’s this beautiful meat sitting in the hip,” explains Bonello. “The rump itself is a moving muscle, but the Pope’s Eye is sitting right inside it not doing anything. It all breaks down when you cook it. You only get two in each carcass. It’s very unique.”

John Dory and lettuce also get passed over the grill, as does the baba ghanoush – eggplants are roasted each morning. The barbeque sauce is also prepared over wood, with onions, chillies and garlic charred and then poured over spiced creamed corn. The menu design allows Bonello to focus on the fundamentals, paring back his dishes to their most essential flavours.

“Before I left Vue de Monde things were changing. It was about what we can take off the plate,” he says. “Even when I plate up a dish and it’s got five ingredients on it, I ask myself what I can take off. It’s the right mentality for food these days.”

Wine, however, has taken a maximalist approach. The huge cellar features wines from as near as the Mornington Peninsula and as far Napa, San Juan and Hungary. There are more than 40 bourbons on the menu, too, so we’d suggest getting an Uber – although it’s around $60 from the city.