With its small menu and relaxed feel, the acclaimed chef’s newest spot pays homage to LA’s taco trucks and Mexico’s taco shops – albeit with high-definition cooking and tap wines from a new-wave winemaker. First there was Igni, chef Aaron Turner’s intimate all-fire, all-local tasting-menu restaurant in a Geelong backstreet. Then came The Hot Chicken Project, Turner’s love letter to Nashville-style fried chicken. For his next trick, our man is zooming in on another much-loved dish from the Americas: tacos. Enter Tacos y Liquor, a compact 40-seat taqueria taking over the former Cabinet Bar site on Little Malop Street in Geelong.

While Turner is drawing inspiration from trips to Mexico – he documented his trip as part of Somekind’s Take Away cookbook series – his experiences with Californian taco trucks and New York bodegas also shaped his latest opening.

“Whether you’re [eating tacos] in an open-air market, on the street corner, or from a taco track and sitting on a corner in the sun, there’s noise, there’s people, you smell the city and you smell the cooking,” says Turner. “It’s pretty cool and it’s pretty addictive.”

The menu, like the space, is tight and runs to just four tacos: carne asada, cooked using a rotating selection of Sher-brand Wagyu secondary cuts; al pastor, made with pork belly from nearby Raven’s Creek Farm; and chicken tinga – shredded chicken in a tomato, onion and chipotle sauce. Vegetarians can hook into tacos crammed with mushroom and huitlacoche, a fungus found on corn that’s also known as Mexican truffle. A burrito option is also available for customers who are especially hungry or ordering takeaway. (Turner correctly believes that tacos don’t travel well and only serves them to dine-in guests.)

Scallop and cactus make cameos on the small rotating menu of tostadas (deep-fried tortillas). Side dishes include street corn, chicken-fat rice with beans, and regional specials such as birra (a beef consommé with shredded beans). Although Turner has a reputation for doing things in-house at Igni, he’s leaving the tortilla-making to Melbourne’s peerless La Tortilleria.

Like the name suggests, drinks are the other half of Tacos y Liquor. There are Margaritas and Palomas, of course. Mezcals and tequilas are also on high rotation, while beer and wine (red and white field blends from SA’s Vinteloper) are on tap, poured into rustic half-litre jars if you so desire. Bottled wine is also available to buy from The Hot Chicken Project across the road. All the booze is considered and to the point, which is what Tacos y Liquor is all about.

“That fattiness, the acidity, the underlying fermented corn flavour from the tortilla: it’s pretty addictive stuff and it makes you happy,” Turner says. “And I think now, more than ever, that feeling of comfort and happiness and familiarity is primary, isn’t it?”

This article first appeared on Broadsheet on January 14, 2021. Menu items may have changed since publication. 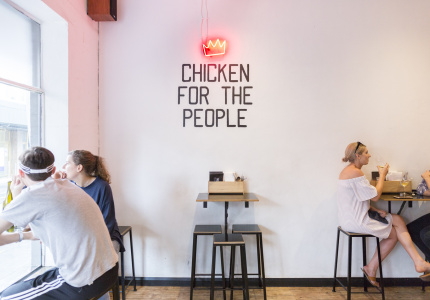