We've had pop-ups in the past, but the shining star of the Sydney burger scene is finally gracing us with permanent digs, bringing 200 seats across two levels to a CBD laneway. Burger joint Mary’s is known for more than just its food. The diner, which originally opened in the Sydney suburb of Newtown in 2013, has a distinct rock’n’roll vibe. There are now three more outposts, including fine diner Mary's Underground, but each one shares an ethos of tasty food, lots of booze, a solid playlist and all-round good times.

And now Melbourne will be graced with a Mary’s of our own.

When Mary’s Melbourne opens in Franklin Street in the CBD on Monday January 20, owners Kenny Graham and Jake Smyth promise all the elements of a textbook Mary’s menu: cheeseburgers, fried chicken, mashed potatoes with gravy, fries and more. Local suppliers include O’Connor Beef in Gippsland and free-range chooks from Bannockburn.

And as at its Circular Quay and Pitt Street venues, everything can be made vegan. There’ll also be special dishes exclusive to Melbourne.

“One of the things we always want from a Mary’s experience is for people to leave going, ‘Fuck, that was fun,’ with an afterthought of, ‘And it was fucking delicious, too’,” Graham told Broadsheet late last year.

The group’s sommelier Caitlyn Rees has put together a 100-strong wine list with a big focus on natural and local drops. Expect smashable wines alongside a few wonkier options. The cocktail list includes plenty of whisky and gin, but there’s something for everyone, with equal weight given to full-strength, mid-strength and non-alcoholic choices.

You’ll enter Mary’s Melbourne through a laneway (look for the entrance marked with a red light) and be greeted by a large wrought-iron chandelier surrounded by 24,000 dead rose stems in a dimly lit room of deep reds, brass fittings and lots and lots of black.

Though they’re well established in Sydney, Smyth and Graham are treating the Melbourne Mary’s as if it were their very first venue.

“We’re coming to Melbourne very humble, knowing that Melbourne does not need us,” Graham says. “Whether [people] want us or not, we’re coming and we’re treating it like it’s day one for us, the same way Newtown was. We’re not taking anything for granted –we’re going to fight for this like we fought for everywhere else.”

Mary’s is opening at 167 Franklin Street, Melbourne, on January 20. 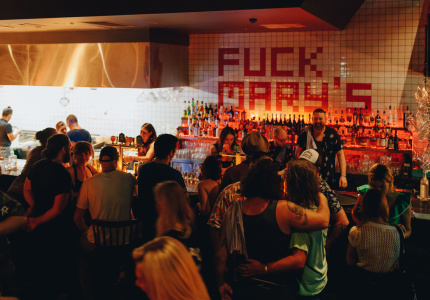