The Sweetwater Inn brings the country back to the city. 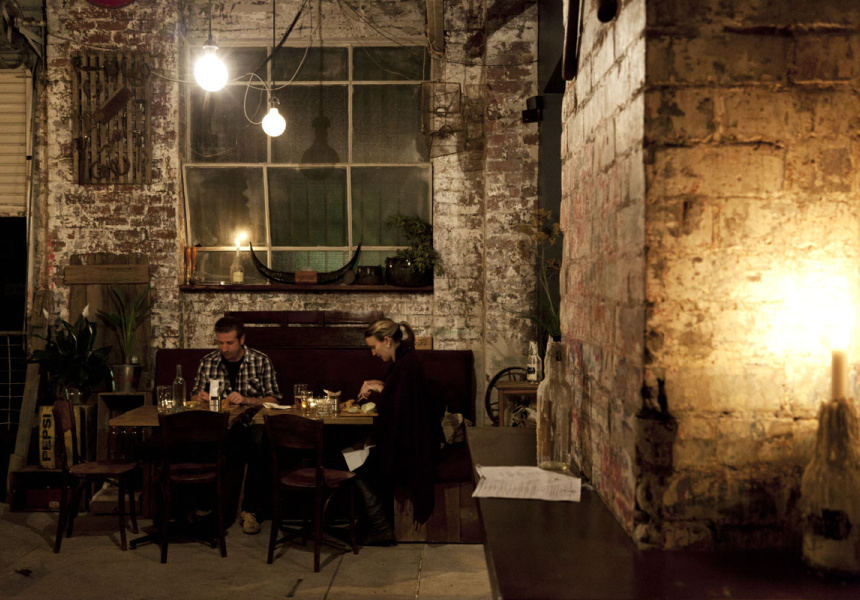 As Melbourne’s restaurant scene becomes more and more diverse, it's sometimes best to look under one's boots for new ideas. Mark Catsburg, Guy Bentley and Benn Wood kicked up some dust, rummaged around the barn for a while, tipped back some whiskey and decided to open the Sweetwater Inn.

Hidden away from the sheen of the Chapel Street hustle, the Sweetwater Inn is a breath of fresh – and sometimes smoky – air in the South Yarra bar scene. The idea behind Sweetwater is one of simplicity and getting back to the roots: rustic Australiana, cheap beer and approachable food, all wrapped in a warm, cowhide blanket. For Catsburg, Bentley and Wood, the wheels really got rolling when they first walked into the vaulted, barn-like space. "We thought let's go with this barn thing and go super country," says Catsburg. "I mean, I think we're all pretty sick of hearing things about New York-style this and New York-style that."

"So we just went full Australiana," he says. "But not in a cheesy way."

In a stroke of rather brilliant understatement, the crew at Sweetwater have created a food and drinks list that is both nostalgic and altogether fresh. The cocktail list includes some rather deft takes on the classics, like their house-smoked rum Old Fashioned and eucalyptus Tom Collins. Think country hooch with a city twist. And if you should find yourself stumbling in after a long, foggy evening, the alchemic Bloody Mary with house-infused bacon vodka and beetroot vodka should help clear the afternoon cobwebs. Or, just dive into the simple sophistication of $5 cans of Fosters, VB and Melbourne Bitter.

For the food, they called in the help of former Gasometer chef Shannon Martinez, who has created a farm-themed menu for both vegos and carnivores alike. Don't miss the kangaroo steak sandwich marinated in Bundy and coke with a side of Melbourne Bitter-braised onions, or go the other route with the shockingly delicious barbecue vegan prawn skewers. Most menu items come served in camping tins and mugs, all rounding out a rockabilly-outback cuisine that is a cheeky turn from the burgers, tacos and foraging that litters Melbourne's tables.

The space itself is a pass on what might be considered raw Australian country: rusted corrugated metal, antique farm tools, animal skulls, taxidermy and a 100-year-old bar top that they poached from the former Station Hotel. "We didn't want to go overboard with taxidermy," admits Catsburg. "We just wanted to have more skulls and bones instead."

Skeletal elements aside, Sweetwater has a welcome locals-only vibe that is both comfortable and affordable. It’s as much a home for regulars as a destination for scurvied sailors and rockers alike.