Spice-Laden and Playful Food at a Discreet Chinese-Inspired Diner 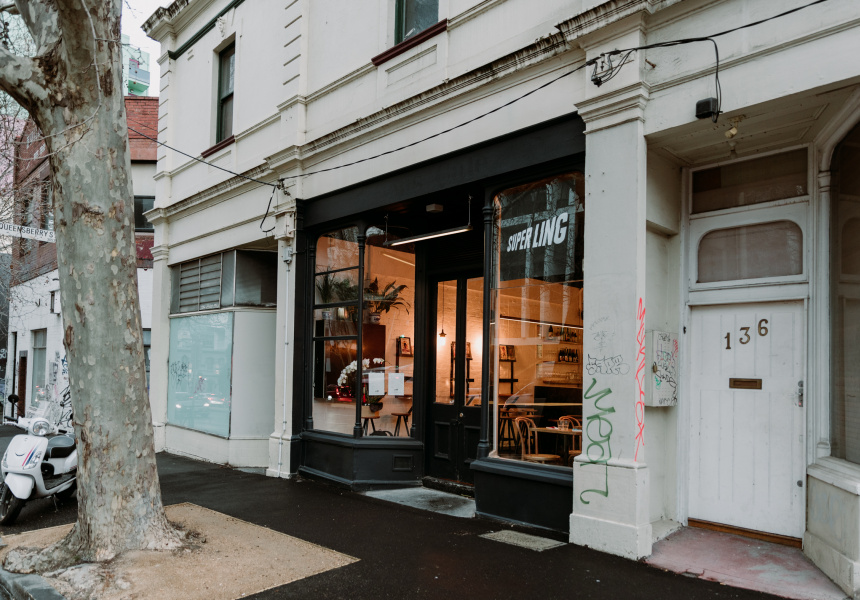 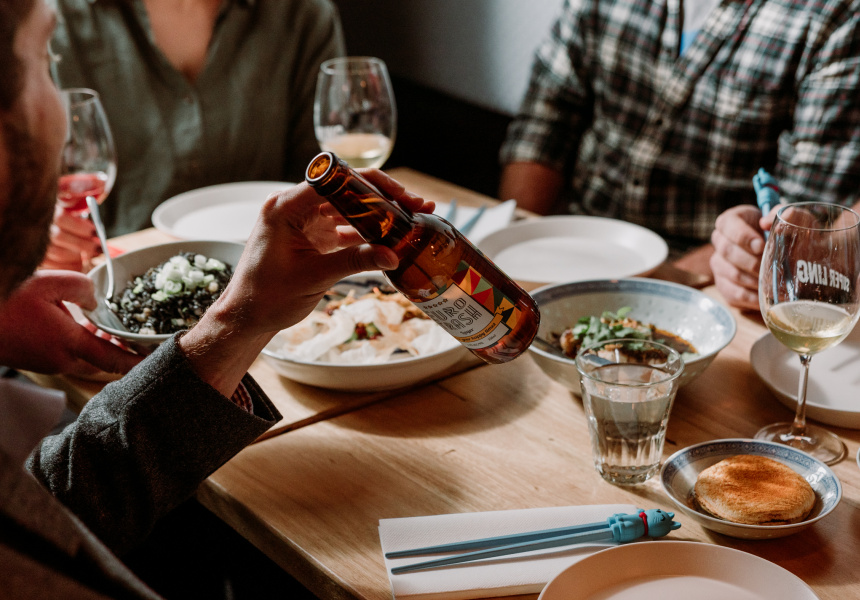 Near the corner of Queensberry and Swanston Streets – in the apartment-block limbo between RMIT and Melbourne Uni – is Super Ling, a casual restaurant serving familiar Chinese flavours in playful ways with gestures to France and Mauritius.

Watched over by posters featuring Bruce Lee and Jackie Chan, the discreet diner feels like an old comic book shopfront, with a kitchen elevated behind the counter. The eatery is small, though a communal table in the centre seats 30. The walls are white, but the high ceiling is painted dark to make the room feel more spacious. Owner Iain Ling (former general manager at MoVida Aqui and current co-owner of Hotel Lincoln), completed the paint job himself, with a few friends.

Chef Michael “Super Mike” Li (formerly Lee Ho Fook, Restaurant Shik, MoVida) is from Mauritius and his mother is Hakka. Hakka people originated in northern China but have been migrating for more than 2000 years, and today the nomadic tribe is not identified by region, but by language. The global Hakka population is estimated at 80 million, and there are large groups in Hong Kong, Taiwan, Malaysia, the US, East Timor and Mauritius.

At the top of the menu are hakien, Mauritian spring rolls made with shredded chayote (a tropical fruit similar in flavour and texture to a radish), carrot and onion, barramundi and pork served with fermented chilli paste.

Steamed barramundi is dressed with Sichuan pepper, soy and chilli oil, and garnished with fresh and fried onions. The familiar tang of the Sichuan peppercorns adds vivacity to the fish, which would normally be secured by lemon juice.

“There’s a lot of things about Mickey’s cooking that are very familiar to me,” says Ling, whose Chinese father, though not Hakka himself, has lived in areas with lots of Hakka migrants, such as Liverpool where Ling grew up, and whose cooking took on a Hakka style. “It’s got that sentimental, nostalgic feeling.”

The steak tartare takes flavours from French and Hakka food, with a black peppercorn, soy and sesame dressing; a glowing green aioli made from spring onion; and fried potato shavings on top. It’s like steak au poivre (steak with peppercorn sauce), says Ling.

The must-have white-bread menu item is a perfectly browned circular jaffle stuffed with mapo tofu: Sichuan minced pork and soft tofu stewed in an oily, firey red sauce flavoured with fermented bean paste. The gooey tofu assumes the role of the toastie’s cheese, and is reminiscent of rou jia mo, a popular street-food dish from Shaanxi Province meaning “meat sandwich”. Noodle dishes will soon be on the menu, too.

The one not-to-be-shared sweet on the menu is a deliberate far cry from any classic Chinese dessert. It’s a mille feuille using puffed wonton skins as pastry (evoking the savouriness of dry two-minute noodles straight from the packet), with a Sichuan-spiced custard and caramelised pineapple.

To drink, there’s one beer; one rice wine; and nine grape wines, distilled from the Lincoln’s 160-strong wine offering. A focus on natural, funky drops helps to offset the spice levels in the food.

This article first appeared on Broadsheet on September 4, 2018. Menu items may have changed since publication.