Head to this new juice bar for plant-based dishes and raw desserts. 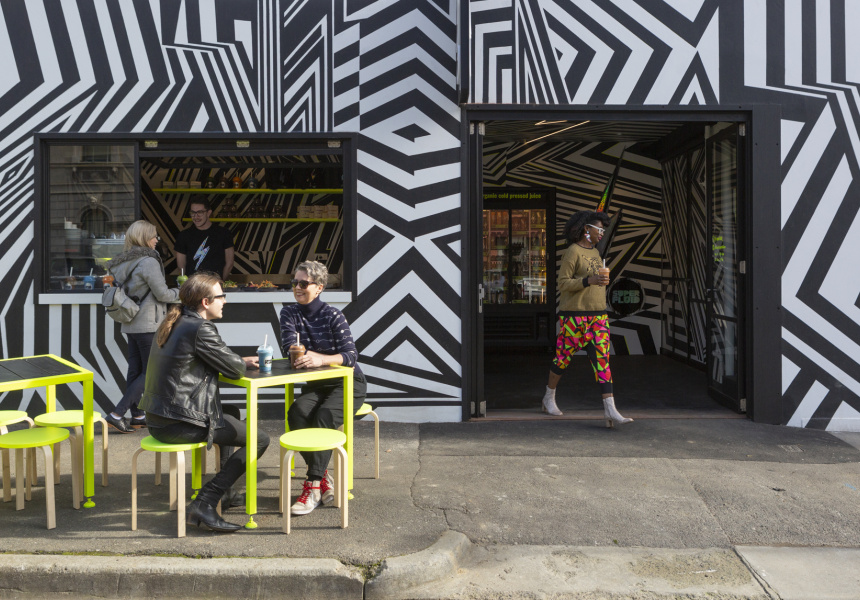 Tracey Lester has a strong visual aesthetic. When Broadsheet visits to photograph her new juice bar, Superfluid, Lester is clad in head-to-toe silver, with an oversized neon-yellow ring on one finger – like an off-duty cosmic rock star.

It was important to Lester that Superfluid’s design reflected her personal style. As a result, the interiors are an unashamedly joyous mix of the metallic and fluorescent. Every inch of the tiny space is plastered in multi-coloured foil lightning bolts, monochrome zigzags and glittery Superfluid logos.

If not for these reminders, and if the menu wasn’t so wholesome, you might think you’d stumbled into a teeny-tiny nightclub.

“We’ve created a space that has an aesthetic ‘wow’ to it, that feels … rock and roll,” Lester says. “You wouldn’t know it was a health-food brand.”

A self-described “healthy party animal”, Lester is well versed in running pubs –she’s behind The Carlton Club, Windsor Castle and the former Gertrude Hotel next door, which is currently closed for renovations but will soon reopen as vegan pub Hotel Electric. Lester’s interest in the use of food as medicine was inspired by her mother’s use of traditional Chinese remedies.

This is the second Superfluid for Lester – the first opened last year at the base of The Carlton Club. The menu here is an expanded version of the original; overseen by chef Tristan Newman, who worked at Cumulus Inc. It aims to be FODMAP-friendly and cater for most food allergies.

The vegan menu includes salads such as the Goodness Greeness with green lentils, peas, snowpeas, mint, pistachio and hemp seeds, and a tangy lemon dressing; and the Raw Pad Thai, which is a tangle of kelp noodles, almonds, zucchini, carrot and cucumber with miso, tamari, coriander and chilli.

After some research trips to LA, Lester and Newman have developed a range of “adaptogenic blends”, using plants common in Chinese medicine, which can be be added to smoothies. There’s also take-home juice cleanses, designed for a gentle detox or hangover remedy, and a range of snacks to go.

“It is accessible to all, whether you are into health or not,” Lester says. “It’s just great tasting food.”