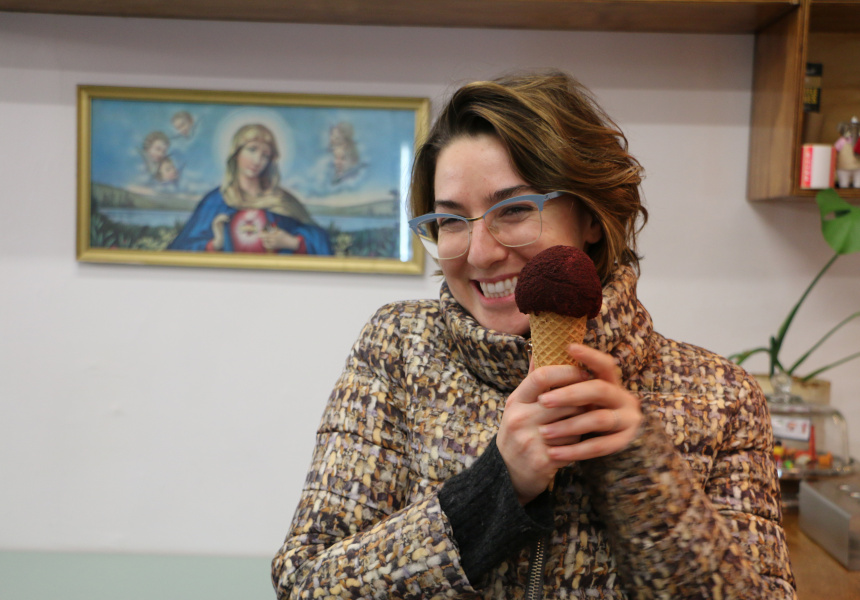 Those teachers have so far included some of Melbourne’s best-known chefs and food personalities, such as Matt Wilkinson (now-closed Pope Joan, The Pie shop) – who created a strawberry cheesecake pie flavour – and Raph Rashid (Beatbox Kitchen, Taco Truck, Juanita Peaches and All Day Donuts) – who whipped up a ricotta, cajeta (goat's milk spiced-caramel) and tortilla chip scoop.

Serex wants to celebrate people in the industry and encourage them to tell their story through an ice-cream flavour. The current guest is Jamie Oliver associate Tobie Puttock.

Puttock’s idea for a scoop, though, created problems for Serex. “When he said, ‘vegan banoffee’, it was way out of my comfort zone.”

Finding a way to add a creamy component to the dessert proved challenging. Serex says coconut, which is often used as a replacement fat in vegan cooking, doesn’t combine well with all flavours. Her solution was to combine coconut cream with cashew milk to minimise the dominating coconut flavour, creating the chocolate base for the scoop. Vegan caramel is then folded through, and the scoop is rolled in a banana-biscuit crumb (made from house-baked vegan biscuits and banana chips).

Some chefs give Serex a loose flavour profile to work with. Cheesemonger Anthony Femia of Prahran Market’s Maker & Monger came in wanting to work with three different cheeses.

“When you think about what you do with cheese,” says Serex, “you pick up the biscuit, the cheese and your fruit paste. So we took it from there.” The final product was Cabot Clothbound cheddar and apple ice-cream with a Jatz cracker crumb.

Other substitute teachers come in with a clear idea of what they want to freeze and whip, such as Phenomenom creator, former Masterchef contestant and ABC News Breakfast culinary correspondent Alice Zaslavsky who created a beetroot and dark chocolate scoop.

“It’s fun to have someone who’s really determined like Alice,” says Serex. “She was like, ‘I want to do beetroot. I want to do vegetables. I want to do dark chocolate’.”

After Puttock, it’s Kylie Millar’s turn – another ex-Masterchef contestant who has since worked at world-renowned Spanish restaurant Mugaritz and Melbourne’s Attica. Later in the year, chef Matt Germanchis from Anglesea’s Captain Moonlite will step in.