Having just opened their third permanent cafe, the journey towards eradicating youth homelessness and poverty starts with an amble down one inspiring STREAT. 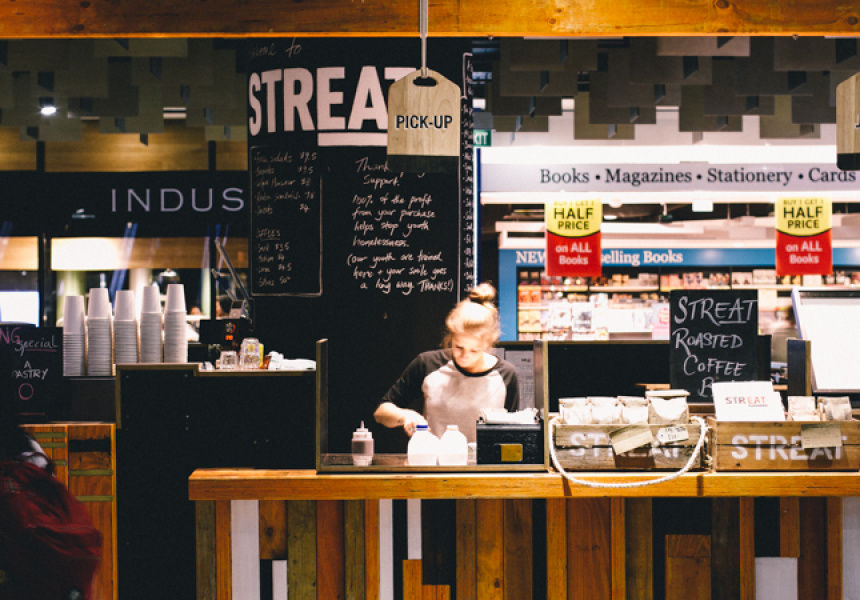 Everyone has a story to tell. Sometimes you just have to lean in a little closer to hear it. What about, say, that strong latte and muffin you picked up as you passed through Melbourne Central on your way to work this morning? If you chose to grab your hurried breakfast from local social initiative STREAT’s newly expanded cafe – which earlier this month took up residence right next to the escalators leading to the train platforms – you’ll know it was delicious, satisfying and served with a warm smile. It’s what might not have been so apparent – STREAT’s ongoing commitment to eradicating youth homelessness and poverty and the inspiring back story of the person who took your order – that’s most fascinating.

The recently completed renovations, which act as an extension of the organisation’s industrious coffee cart, include the addition of scattered benches and seats that bring to mind neat little Rubik’s cubes and provide the perfect spot to take five. They were partially funded by a Pozible campaign launched by STREAT late last year that raised $40,000 by appealing to the general public.

The space was unveiled at a launch earlier this month celebrating not only the new cafe, but the STREAT Cookbook – a collection of recipes that make up the menus of STREAT’s other venues (on Racecourse Road, Flemington and McKillop Street in the city), as well as those developed by graduates of the organisation’s hospitality training program. The year long program gives underprivileged youth both formal and informal skills necessary to become certified and ideally, gain autonomous, ongoing employment in the industry.

One such graduate is the quietly self-assured Aaron, who spoke at the launch about the difficulties he experienced early on in his adolescence and how his involvement with STREAT gave him the sense of purpose and support he needed to change the direction of his life.

“I had a mental illness when I was younger, left school when I was 15, experienced homelessness and I’m dyslexic, so although I always wanted to work in hospitality I never followed it up,” he says. “I wasn’t confident, I didn’t talk very much and I couldn’t hold down a job, but today I’m in a very different place".

“I completed my Certificate II in Hospitality at William Angliss through STREAT and since graduating I’ve got a job bartending at the Doutta Galla Hotel (in Flemington) and have even been offered a fulltime two-year chef’s apprenticeship, which is what I really want to do".

Moreover, Aaron’s now a published author. A twist on a recipe of bread and butter pudding his late nan used to make him every Sunday features in the STREAT Cookbook, allowing him to share and memorialise a positive childhood memory in a way he would have previously thought unimaginable.

While Aaron’s journey with STREAT has been overwhelmingly positive, of the 15 trainees he started the program with, only five actually completed the course due to countless unexpected challenges. This humbling statistic highlights the numerous case-by-case difficulties STREAT faces in their mission to elicit change on an individual level.

Encouragingly, the wider community continues to embrace the work of the organisation, with STREAT recently announced as a finalist in the inaugural Australian Social Enterprise Awards. The awards, which are being presented tonight, celebrate the use of innovative commercial practices to deliver economic, social, cultural and environmental outcomes that benefit the public in a meaningful way. Nominated in two categories, if successful STREAT will receive $10,000 towards the expansion of their practices or have a representative sponsored to take part in a similar international forum.

Regardless, it’s the fact that the amazing work of STREAT, a somewhat unsung hero, is being publicly acknowledged that is most gratifying.