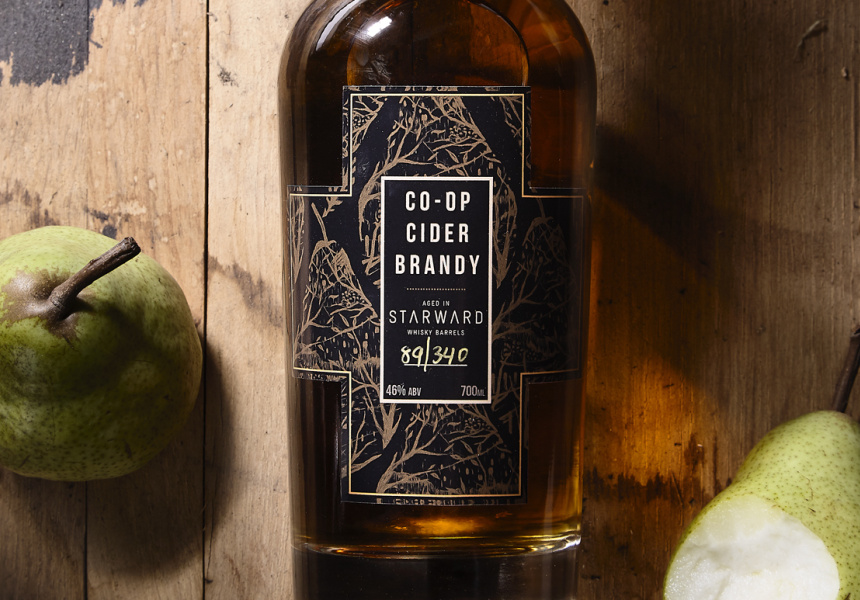 When you take beautiful local pears and ferment them in whisky barrels from a local distillery what do you get? A brandy so good the creators are kicking themselves they didn’t make more.

Faire Ferments, the makers of Co-Op Cider, teamed up with Melbourne’s Starward Distillery in 2014 to distill brandy from pear cider. They then aged the spirit in whisky barrels for three years.

Director of Faire Ferments Sam Pendergast says it was a little nerve-racking to taste the result but he was always confident in the product.

“The spirit was a beautiful pear spirit, and the barrel was an ex-Starward barrel, so the possibility of it going wrong was very slim because we are working with some high quality ingredients.”

Faire Ferments began after major fruit-processing companies Heinz and SPC began reducing operations in the Goulburn Valley. When Heinz closed its tomato sauce factory, farmers banded together to form the Goulburn Valley Co-Op to distribute excess tomatoes. Faire Ferments followed their lead and started turning excess fruit into cider. At the time, Pendergast was involved in the Co-op while also working as a distiller at Starward.

Now that the result has exceeded expectation, Pendergast says he wishes they had made more. Brandy takes at least two years to mature, so if you miss out on one of the first run’s 350 bottles it may be a while before you get another chance.

“There’s no immediate follow-up to this product, but it’s being so well received that we’re talking about doing it again,” he says.

Because he has an interest in farming and distilling, Pendergast is excited for the future of the Australian brandy industry. While spirits like whisky and gin are flourishing, brandy hasn’t been as readily adopted by new Australian distilleries. But he believes that, because brandy can be made from any fruit and aged in any barrel, the combinations are “limitless”.

“This product is a true representation of our cider and Starward Whisky.”

Co-Op Cider Brandy will be launched at Starward Distillery on November 10. Full details on the spirit and launch here.