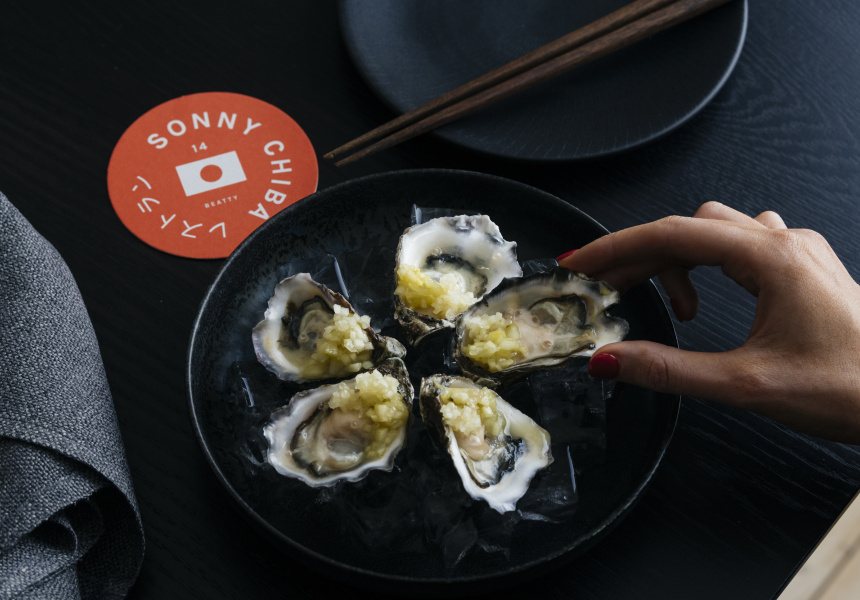 Jun Ha Park reaches for the glistening blade in front of him. Shoulders hunched, forehead creased in concentration, he slices through a fillet of salmon in a matter of seconds, his right hand rising and falling like a gently rolling wave.

Soon after, he picks up a wad of rice from a nearby container, lifts his hand into the air, lets his wrist go limp, and – his forefingers resting on his thumb so that his hand looks a bit like a shadow puppet – he massages the wad of rice into a compact ball. Park repeats the process until he’s lined up a handful of these rice balls on a navy ceramic dish, then, using chopsticks, he lays slices of salmon on top of each one. He moves at speed.

Upstairs, two more dining rooms – one public, one private – stay true to the minimalist vibe, with a little more warmth courtesy of wooden floorboards and an original fireplace.

The space matches the style of the food – a combination of traditional Japanese fare (karaage chicken with tonkatsu mayo, tuna tataki with wasabi cream, soba noodle salad and handmade pork gyoza) and more adventurous alternatives, such as a curried beef brisket doughnut topped with yuzu salt and coconut shavings.

There are also near-translucent slices of elegant kingfish paired with a deep, musky truffle vinaigrette you can smell as soon as soon it hits the table; poached prawns and pickled daikon sandwiched between two rounds of milk loaf; and Wagyu tataki. The beef has a marble score of five, and the flavour is reminiscent of a sort of Japanese salami. It’s paired with strands of fried potato, celeriac and green apple, which cuts through the beef’s evenly dispersed fat.

For dessert, there’s an Iced Vovo mille-feuille with raspberries and marshmallow. And to drink there’s Asahi on tap; an international wine list comprising familiar Australian drops and slightly less familiar European ones (pinot blanc from Baden, Germany); and a handful of predominantly light, floral cocktails.

There’s also a small selection of sake and umeshu, which, together with Park’s theatrics, the minimalist decor and moody lighting, makes this a prime candidate for your next date night.

This article first appeared on Broadsheet on February 21, 2019. Menu items may have changed since publication.